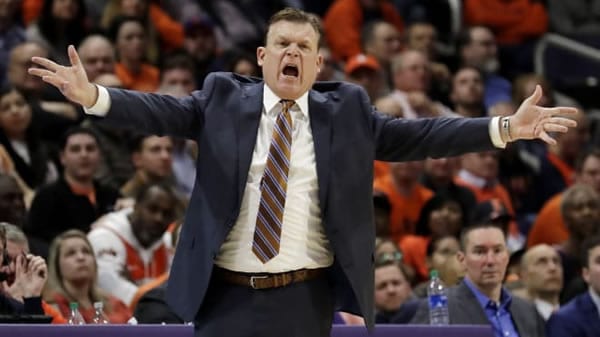 The marquee game of the ACC-Big Ten challenge sees a pair of teams that need to get some momentum going in a hurry. The Illini got a wake-up call that being a top 10 team is no easy task as they ran into a Baylor squad that was able to match up with Kofi Cockburn and force him into foul trouble. That changed the game strategy and forced Illinois into a situation it hadn’t faced before. The Illini haven’t been at this level in some time, and it’s proven to be very much a growing process for a team that expects to challenge for the Final Four.

Duke’s got many of the same problems, as the Blue Devils are trying to learn how to play college basketball in a pandemic. Much like fellow one-and-done bastion Kentucky, Duke looks nothing like a top team to this point in the season. The Blue Devils’ wins are over Coppin State and Bellarmine, and they’ve shown an alarming tendency to turn over the basketball. Mike Krzyzewski teams aren’t really known for giving away possessions, but this Duke squad is turning it over 17 times a game. Can the Blue Devils get things figured out against an Illinois squad that’s looking to prove something?

Illinois played enough defense to win against Baylor. The problem is that the Illini didn’t hit their shots. Ayo Dosunmu did score 18 points against the Bears, but he had to take 18 shots in order to do it. That’s not a great way to win a game, and it’s even worse when Adam Miller goes 0-for-6 from behind the arc. But that’s life when you’re built around being a four-guard lineup with a center, and you lose your center on fouls just a few minutes into the game. If Illinois is going to be a Final Four contender, it has to keep Cockburn on the court for most of the game.

Right now, the biggest thing for the Illini is keeping their confidence up and not letting their first failed test of the season get in their heads. Illinois was able to play with Baylor for 30 minutes, and if Cockburn hadn’t been carrying four personals, the Illini might have been able to stay in the contest from beginning to end. Brad Underwood’s team really hasn’t played in these kinds of games before, and wins are going to come as the Illini get more experience. As long as Illinois can keep its heads in the right place, success is likely to follow.

Until Friday, Bellarmine had never before played a Division I college basketball game. The Knights were a Division II squad that made the jump this year, making Duke their first game ever at this level. And the Blue Devils still managed to turn the ball over 18 times against a team that had never before played in Division I. Duke was never in danger of losing to Bellarmine because the Blue Devils shot 51.8 percent from the floor and hit 50 percent of their 3-point shots, but the mistakes are a real problem and will be a major problem against a team that runs the floor as well as Illinois.

To this point, Duke has gotten away with its mistakes because Coppin State (which forced 22 Duke turnovers in the opener) can’t shoot, and Bellarmine isn’t the type of team that likes to get out on the fast break. Illinois can do both of those things and do them very well. Duke has to take care of the basketball and shoot as well as it did in the Bellarmine game. The Blue Devils aren’t likely to win the rebounding battle with Cockburn down low, and given that Duke is not a great free-throw shooting team, it can’t steal Baylor’s strategy of getting Cockburn to commit fouls. The only strategy the Blue Devils have here is to hit their shots.

Mentality. Which team is mentally ready to play this game? Both Underwood and Krzyzewski know that their teams didn’t have a good week over the past seven days, and both sides should be eager to bounce back and get back to the way their coaches believe they can play.

Even though Duke is the program that has been to this level more recently (the Blue Devils won the 2015 national championship, while Illinois hasn’t even played in the tournament since 2013), there’s reason to believe that it’s the more fragile program here. The Blue Devils are loaded with young players because of Krzyzewski’s embrace of the one-and-done, which means that Duke can’t really rely on past success because high school wins aren’t the same thing as college success. Illinois at least got some taste of success last year and might be the stronger side mentally.

The Illini can force turnovers. If Coppin State and Bellarmine can do it, so can Illinois, and if the Illini get free possessions, they know how to turn them into points. Illinois is one of the fastest teams in the country, and every mistake gets punished against a Brad Underwood-coached team. If the Illini are forcing Duke into 15 to 20 turnovers, this will be their game to lose.

The Blue Devils can either get Cockburn on the bench or force Dosunmu into bad shots (or both). Duke is at its best when it plays good defense, which is something that takes time for freshmen to learn. The Blue Devils have to grow up quickly and figure out how to neutralize one of the two Illini stars, or this will be a long night.

It’s hard to go against Duke in Cameron, but I’ve already done it once this season and saw Michigan State not only cover but win the game outright. The bottom line is that the Blue Devils are not yet at the level that Krzyzewski wants them to be at, and it’s going to take a lot of time for them to get there. Illinois is further along, and Duke doesn’t have its turnover issues resolved. Give me the Illini here. Note: We’re on a crusade to get everybody betting at BAS Sportsbook because it will save our readers money! Why the hell would anybody bet on games at -110 odds when they could be laying only -105? Dump your overpriced bookie immediately and start reaping the benefits of reduced odds sports betting at BetAnySports! You’ll be so glad you took the 5 minutes to make the change!