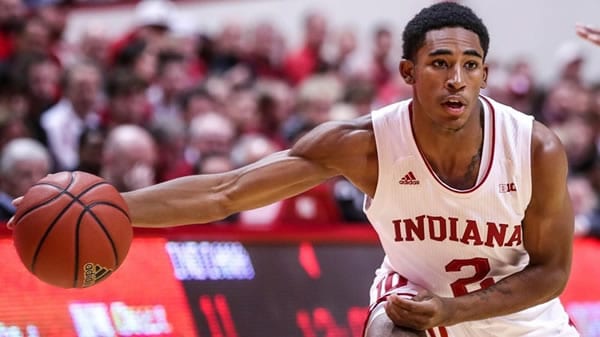 A pair of teams who have been struggling to get any kind of consistency match up in this battle of bordering states. Illinois is in solid shape as far as the Big Ten goes, as the Fighting Illini sit in second place to Michigan despite a pair of home stumbles to Ohio State and Rutgers. But Illinois has work to do to get a high seed in the NCAA tournament, because other than the win over Iowa, there’s not a lot on the Illini’s profile in terms of quality victories.
That’s a much better situation than Indiana, which has a serious concern about whether it’s going to qualify for the tournament at all. The Hoosiers also are in need of quality wins, and they’re starting to run out of time to get them. Indiana has been the height of inconsistency this season, as the Hoosiers managed to get a win at Iowa but got tripped up at home by Northwestern. With just nine games left on the slate, just about any win the Hoosiers get from here on out will help the profile, but at 9-7, Indiana can’t afford too many more setbacks if it hopes to play the tournament in its home state. Can the Hoosiers get the home win that they desperately need?

If Ayo Dosunmu could play against Indiana every time out, he might be the John Wooden Player of the Year by unanimous decision. In the first meeting, Dosunmu blistered the Hoosiers for 30 points, taking nearly a third of his team’s shots and hitting 11-for-17 from the floor.

The problem is that other than Kofi Cockburn, the rest of the Illini really came up small against the Hoosiers when the teams met in Champaign. Dosunmu and Cockburn scored 45 out of 69 points in the first meeting against the Hoosiers, and that’s not sustainable if Indiana manages to get one of them into foul trouble. The first meeting was relatively light on the whistles, as only 24 fouls were called on both teams, but there’s no guarantee that this one goes the same way. Illinois has to have someone else step up this time besides its two primary weapons.

Perhaps it was because of who they were facing, but the Hoosiers opted to go for points on the perimeter as opposed to attacking inside the last time they faced Illinois. Armaan Franklin scored 22 points in that game, while Trayce Jackson-Davis scored just 11 points for the contest.
That’s not a sustainable way for the Hoosiers to compete with the Illini, especially with how important Jackson-Davis is to the offense. The loss to Rutgers marked the sophomore’s third-lowest point total of the season, and the Hoosiers are just 3-3 when Jackson-Davis scores fewer than 20 points. The Hoosiers don’t really have any depth whatsoever. All five starters usually play around 30 minutes per night, so taking their biggest weapon out of the game simply isn’t going to work against a squad as skilled as Illinois.

The interior. These are two of the strongest inside players in the Big Ten, and they need to play like it. Cockburn has a huge weight edge on Jackson-Davis, as the Indiana big man is giving away 45 pounds to his Illini counterpart. But that doesn’t mean that Indiana can play scared inside as it did in the first game because the Hoosiers’ guard play is not good enough to beat Illinois without getting a good game out of Jackson-Davis.
On the other hand, Illinois doesn’t need a huge game out of Cockburn to get a win over Indiana. With how well Dosunmu played the first game, all Illinois needs is for Cockburn to make himself a large presence inside again and minimize the effectiveness of Jackson-Davis.

The Illini can own the glass again. Illinois dominated the boards in the first meeting because of 15 rebounds from Cockburn, and the Illini have to keep the Hoosiers intimidated enough to allow the big man to again create plenty of second chances. If Illinois keeps getting second and third chances at the basket, Indiana’s got little chance.

The Hoosiers can actually challenge Illinois inside. Too often, the Hoosiers don’t assert themselves inside, but they’ve gotten away with it in the right matchup. This isn’t the right matchup to try that, because Illinois’ guards are good enough to actually deny the Hoosiers good looks at the basket. Indiana isn’t likely to shoot 47.6 percent from behind the arc against Illinois the way it did against Iowa, which means the Hoosiers have to at least hold their own in the paint.

This is a trap game for Illinois, but I just don’t feel all that comfortable taking the Hoosiers in this situation. Indiana has the talent to get a win, but I don’t think it has the belief that it belongs on the same floor as Illinois, and I can’t see Jackson-Davis asserting himself in this game given what he’s done in his first two matchups with Cockburn.
In two games against Illinois, Jackson-Davis has a combined 23 points, and that isn’t going to get it done. Give me the Illini for the small cover here. Bet your Ill/Ind pick and ALL your sports bets each day at -105 reduced odds (instead of the spendier -110 that your book is socking you) at one of the web’s best college basketball betting sites: BetAnySports!