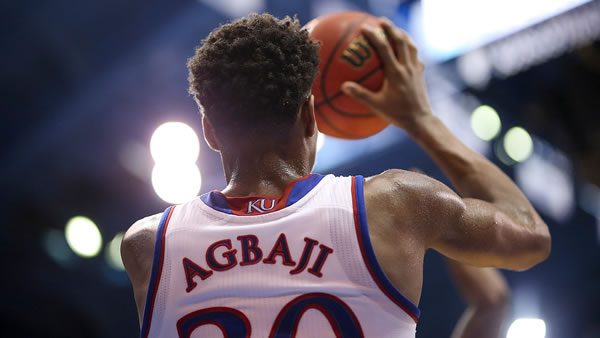 Bill Self might be a brilliant coach, but he’s not fooling anyone when he tries to claim that Kansas State is on the inside of the bubble. Of course, Self can be forgiven for not knowing much about the bubble, as he hasn’t had to sweat Selection Sunday since 1998 when he was coaching Tulsa. Kansas State doesn’t have that luxury, as the Wildcats’ poor non-conference schedule has them sitting at 14-12 and needing more big wins to even have a chance at the NCAA tournament. The Wildcats have played better in recent weeks to even give themselves a chance, but a loss to Oklahoma State was a missed opportunity that all but ensures that K-State has to find a win in Lawrence to get onto the bubble.

And as with most teams not named Kentucky, good luck with that. Kansas can give itself a two-game lead in the Big 12 with four games to play, and with one of those games being Baylor, the Jayhawks can all but lock up the Big 12 with a pair of wins this week. There’s also the small matter of how close Kansas came to disaster in Manhattan, as the Jayhawks overcame a 16-point deficit at halftime and came back to beat K-State. Chances are, the Jayhawks don’t want this to be anywhere near as close this time.

For the most part, Kansas State followed its blueprint for beating Kansas pretty well when the teams met in Manhattan: the Wildcats held the Jayhawks to 5-for-21 from behind the arc and got great shooting from Nijel Pack, who went for 35 points. Just as important, they didn’t throw the ball away against the Kansas defense.

But they lost anyway because they couldn’t rebound and couldn’t hit free throws. The foul shots will likely correct themselves, as K-State is normally a solid team at the stripe. On the other hand, the rebounding is likely to remain a problem, as the Wildcats really don’t have anyone who can bang around in the paint with Kansas’ post players. K-State’s minutes leaders are all guards, and while Mark Smith rebounds the ball well at 8.6 boards per game, he’s the only one. The rest of the Wildcats average just 26 rebounds a game as a team, so if K-State misses a shot, that’s usually the end of the possession. That’s why the shooting touch is a must: Kansas State isn’t likely to get multiple chances to keep attacking the rim in this game.

This is a frightening thought for the rest of the Big 12: David McCormack is back from the dead. After spending so many games struggling to get minutes and impact games that it became fair to wonder if something was going on off the court, McCormack has returned to being the player he was a year ago, scoring 19 points and grabbing 11 rebounds in the win over West Virginia.

But with or without McCormack, Kansas remains built around its two-star guards, Ochai Agbaji and Christian Braun. Against West Virginia, Agbaji was on yet again, scoring 23 points in the win. The real concern for the Jayhawks, though, comes from their depth. Against the Mountaineers, no reserve played more than 13 minutes, and that was without Remy Martin in uniform. Kansas has gotten fantastic play from its starting five, but if anyone gets in foul trouble, the Jayhawks could find themselves in a tight spot.

Kansas State will Cover If: The Wildcats can hit their shots and keep the Jayhawks from running all over them. Kansas State does not like as fast of a pace as Kansas does, and the Wildcats are best served by taking their time and looking for the right shot. If they can hit shots, they’ll force the Jayhawks to take their time.

Kansas will Cover If: The Jayhawks can bludgeon the Wildcats inside again. Kansas had three players get to 11 rebounds against West Virginia, and it could be even worse against K-State given that they outrebounded the Wildcats 45-23 in Manhattan. As long as the Jayhawks keep flying to the ball, they should be fine.

Kansas State’s strength is its dominant 3-point defense, but Kansas has such an advantage inside that it almost doesn’t matter if the Jayhawks miss from the perimeter because they’ll probably just put the ball back off the window. That says the over has a good chance to hit, but there’s always the worry of Kansas locking down on its foes in the Phog. I like Kansas’ team total to go over 78.

Kansas State’s play has improved, but there’s a big difference between beating TCU on the road and winning in Allen Fieldhouse. K-State has lost 15 straight in Lawrence, and Bruce Weber is 0-9 in the Phog and has lost seven of those nine by double digits.
That tells me what I need to know here. Give me the Jayhawks. Bet your college basketball picks for FREE this week by taking advantage of a 100% REAL CASH bonus at GTBets!