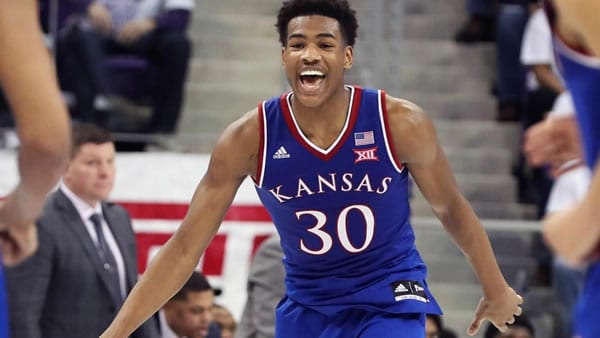 A pair of bluebloods who were both unhappy with the way they ended the season in 2021 now get to see if they’ve ironed out the kinks from last season and set themselves up for a return to form this year. In Kansas’ case, the Jayhawks believe they’re a contender to bring another national title to the Big 12, as they’ve got a quality point guard in Remy Martin in the fold and bring back a solid big man in David McCormack. But the Jayhawks still have one big weakness inside, as McCormack was the only big man last season, leading to Kansas getting shoved around by USC in the second round a year ago.

Michigan State doesn’t have the same expectations as those that exist in Lawrence right now, but Tom Izzo certainly isn’t thrilled about the way the Spartans’ season closed last year. Michigan State had UCLA beaten, only to watch the lead slip away and then watch the Bruins run through the regional and go from First Four to Final Four. Few people outside the program think the Spartans are going to follow the same path, but there’s plenty of talent here if Izzo can get it on the same page. But Joey Hauser was incredibly disappointing last season in East Lansing, and if that doesn’t change, the Spartans are in trouble.

The big question for Kansas is how fast the Jayhawks are going to play now that Martin is running the show. Truth be told, Marcus Garrett wasn’t really all that great a year ago in his final season in Lawrence, and Kansas’ play suffered as a result. Martin should be a bit of an improvement, if he can adjust to the Jayhawks’ slower tempo and become more of a distributor.

Last year, Martin ran the country’s 17th-fastest offense at Arizona State, and part of the reason that the Sun Devils got off as many shots as they did was that Martin was option A, option B and sometimes option C for getting off a shot. This time, Martin will be looking for McCormick and Ochai Agbaji far more often, which will likely lead to a slower pace than what Martin saw a year ago. That means possessions are crucial, and Kansas really can’t afford to have an assist-to-turnover ratio as close to 1 as it was last season. The offense was a big part of the problem last year for the Jayhawks, which was why USC was easily able to bludgeon Kansas inside. Whether they’ve cleaned up the mistakes will tell the tale of their campaign.

Offense was a big issue for Michigan State as well last year, but unlike Kansas, the Spartans didn’t really have the defense needed to overcome it. Part of that was because the Spartans got fed to the Big Ten meat grinder a season ago, but part of it was also because Michigan State just never really clicked and learned how to play the kind of defense that Izzo’s teams are known for.

The defense should improve in the form of Tyson Walker, who was the Colonial Athletic Association’s defensive player of the year last season at Northeastern. He’ll likely have the task of trying to contain Martin, and he’ll have to adjust quickly if the Spartans are going to hang with the Jayhawks. Walker did a fine job of defense on North Carolina’s guards when the Huskies met the Tar Heels, but the Heels were also Wisconsin road kill in the NCAA tournament last season, so that might not be the best sign for Walker’s ability to handle big-name players.

David McCormack can take control of the game early and overwhelm the Spartans inside. Michigan State really hasn’t had a reliable big man it can count on, as top rebounder Aaron Henry now wears the red, white and blue of the Philadelphia 76ers. Joey Hauser is the best option the Spartans have inside, and based off what Hauser has shown in a rather disappointing college career to this point, McCormack can win this battle.

The Spartans can force Martin into mistakes. Martin hasn’t yet played a game against Division I competition in a Kansas uniform, and the Jayhawks have historically turned the ball over a fair amount in these Champions Classic games. Walker gives the Spartans an edge on defense if he’s up to the challenge, and if that’s the case, Michigan State will be in fine shape.

The over looks like the play here. Kansas might be slower than Martin is used to, but it’s not like the Jayhawks are Virginia. Kansas was still able to average in the 70s last season, and Michigan State hasn’t yet shown that it’s going to play all that many lower-scoring games. I think the Jayhawks will play a bit faster with Martin on the court, and that should push the number here.

I believe in David McCormack’s ability to score inside as long as Remy Martin gets him the ball. I do not believe in Joey Hauser’s ability, as he’s shown nothing to suggest that he’s anything more than a middling shooter who turns the ball over too often. I think McCormack takes over the game and leads the Jayhawks to a solid start here. I’m backing Kansas. Bet your Week 11 college football predictions for FREE by taking advantage of a 100% REAL CASH bonus on your first deposit of $100 to $1000 at Betnow Sportsbook!