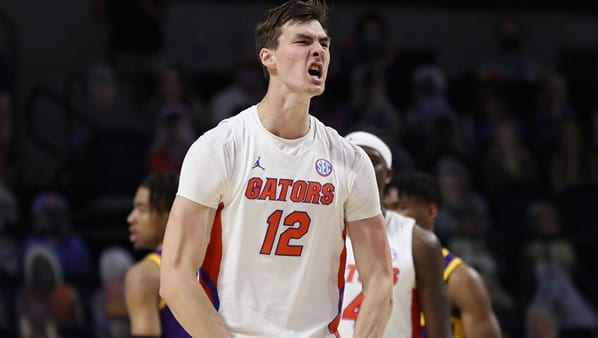 After Kentucky’s worst start in more than a century, the Wildcats are somehow one of only three SEC teams with an undefeated record in the conference. Kentucky has managed to pick up wins over Vanderbilt and Mississippi State. John Calipari seems to believe that he has the Wildcats finally heading in the right direction after stumbling through a schedule of ACC teams and the likely winner of the Atlantic 10.

But nobody has been through a more difficult winter than Florida, which saw its best player fall to the court because of complications from COVID. The Gators have played the past three games without Keyontae Johnson, and although they came up with two wins out of three, they’re clearly not the same team without him than they were before his injury. Florida shot just 39 percent against Alabama in large part because it didn’t have much of an inside pres-ence, exactly what Johnson provided. Can the Gators get back on track in this battle of teams who are very much in transition?

Kentucky’s strategy of going freshman-heavy has backfired horribly this year, as both the Wild-cats and Duke are finding out that young teams need a lot of preseason preparation to get to where they need to be. The result has been a Kentucky squad that’s got a lot of raw talent but is still very much figuring out which parts go where. Because of that, the Wildcats don’t shoot it very well and don’t rebound anywhere near as well as a John Calipari squad usually does.

The play of Brandon Boston really sums up the Wildcats in 2020-21 better than anyone else. Boston’s the leading scorer on the Wildcats with 12.8 points a game, but it’s because he shoots as often as he does, not because he’s having an outstanding freshman season. For the year, Bos-ton shoots just 35.8 percent from the floor, and his 3-point percentage is an anemic 15.2 per-cent. The biggest sign of Kentucky’s immaturity: Boston and Terrence Clark are a combined 10-for-55 for the season from beyond the arc, which leads to a lot of rebounds that Kentucky isn’t getting.

That’s got its pluses and minuses, and the minuses were very much on display against Alabama. The Tide were able to keep the Gators far from the basket and force a lot of mid-range shots, which didn’t end well for Florida. The Gators shot 18-for-48 from inside 20 feet, and Castleton was the only one in orange and blue to shoot above 50 percent for the game. To make matters worse, Florida only got to the free-throw line 14 times, compared to 16 made free throws for the Crimson Tide.

What that says is Noah Locke, and Tre Mann need to be more willing to shoot it from deep. Florida’s not the kind of team that forces itself into bad shots, which is partially why the Gators shot it better from behind the arc than inside. But the Gators no longer have the type of team that allows them to be selective and still play at their preferred pace because they don’t have someone like Johnson inside to command a defense’s attention.

Turnovers and transition. Both of these teams make a lot of mistakes with the basket-ball, and with the speed that Florida likes to play, turnovers could be rather critical. The biggest advantage Florida has in this game is that long rebounds and turnovers allow the Gators to get out and run, and Kentucky really doesn’t seem as willing to run as Florida will be. The Wildcats are going to miss a lot of shots if they play their usual game, which means they’ve got to take care of the basketball and prevent Florida from getting out on the break. If the Gators are able to get out and run as much as they want, it’s hard to see how Kentucky wins this game.

The Wildcats make better decisions with the basketball. Kentucky has an opportunity to take ad-vantage of a weakness by getting the ball inside and making Castleton use up his fouls. Beyond him, Florida isn’t all that strong inside, and in Olivier Sarr, the Wildcats have a seven-footer who can pound away all day if his teammates are smart enough to get him the basketball.

Florida will Cover If:

The Gators can find openings and knock down their shots. Florida needs to be more aggressive from the arc because this is not the kind of Kentucky team that will rebound anywhere near as well as it usually does. The Gators can count on Castleton to get a few boards, and if Mann and Locke heat up early, it’ll be tough for Kentucky to keep pace.

Kentucky is making progress, and Florida is a wounded animal that ran into its first taste of ad-versity since the Johnson injury. But the fact that the line is shrinking says that the public is buy-ing into the Wildcats, and any time the public starts buying something, it’s usually a good idea to head in the other direction. Plus, Florida’s been a tremendous bounce-back team, covering in each of their past five after an ATS loss.

That’s enough for me. Give me the Gators.