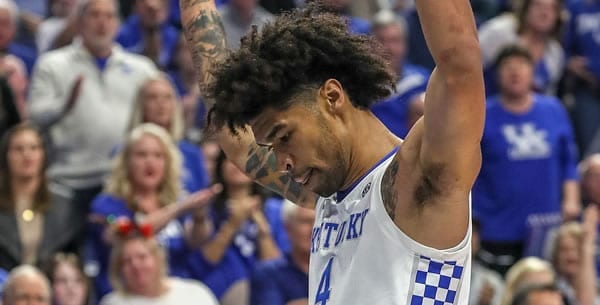 Figuring out Kentucky has been almost impossible this season, as the Wildcats have shown the inconsistency that tends to happen when you build a roster around nothing but freshmen. Kentucky has had several highlights this year, as shown in wins over the likes of Michigan State and Louisville, but the Wildcats have also taken some inexplicable defeats, such as the loss to Evansville. Which version of the Wildcats will show up is anyone’s guess, and it’s an even harder guess to make given that Ashton Hagans might or might not play.

Kentucky rode Immanuel Quickley and Nick Richards in a win over Missouri, and if Hagans is out for the entire game at Georgia, both players will have to step up at a higher level. The same is true of Tyrese Maxey, who has been Kentucky’s leading scorer but only managed eight points against Missouri.

Georgia’s coming off its biggest win in almost a decade, and that’s a sign that Tom Crean might be close to turning the corner in Athens. Georgia has long been an afterthought in the SEC in basketball, but with Anthony Edwards in the fold, the Bulldogs might finally be on their way to becoming a real factor in the league. Edwards is the kind of player that has traditionally ended up at Kentucky, as he might be one of the first five players chosen in the NBA draft in the spring. Against Memphis, he didn’t even play that well and still managed to score 13 points and hold off a top 10 opponent.

The real question is whether the way Georgia won is sustainable. The Bulldogs got a poor shooting performance from Edwards and Rayshaun Hammonds, but they won anyway because the rest of the team combined to shoot 50 percent. Included in that was a 10-for-22 performance from behind the arc even with their stars struggling, a number that might not be easily replicated.

History. The Bulldogs haven’t had much success against Kentucky as of late, regardless of where the game has been played. Kentucky has made the trip to Athens seven times this decade, and the Wildcats own a 5-2 record at Stegeman Coliseum in that span. Since 2010, the Wildcats own a 17-2 record against Georgia and have won 12 in a row against the Bulldogs. Georgia has to put its past behind it and find a way to be competitive against the SEC’s best-known program. If the Bulldogs allow the past to overwhelm them, this will be over before it begins.

The Wildcats can play tough defense. Perhaps it’s because these Wildcats have played several defense-first squads, but Kentucky has really taken defense seriously and only gives up 61.7 points per game. Memphis couldn’t get the job done on the defensive end against Georgia, which is why the Tigers wound up on the wrong end of the scoreboard. If Kentucky can play well on defense and keep Hammonds and Edwards from getting good looks, Georgia likely doesn’t have a Plan B available.

The Bulldogs can win the battle on the glass. This isn’t a typical Kentucky team in that the Wildcats really don’t rebound the ball all that well. Kentucky has historically been a great rebounding squad, but this year’s ream really doesn’t get after missed shots the way that other Kentucky teams did or the way that Georgia has this season. Hammonds averages 9.1 rebounds per game, which can lead to several layups going the other way for the Bulldogs after a missed Kentucky shot. If Georgia can limit Kentucky to one shot, this is the Bulldogs’ game to win.

Georgia was in this situation against Kentucky and lost by 20, but that Georgia team was at least a year away from being anywhere near the vision that Tom Crean wants to see from his squad. This year’s team looks much closer to that overall contender that Bulldogs fans envisioned when they brought Crean in to resurrect their basketball program. Wih Edwards playing very well in his likely only season of college, Georgia seems to have moved up the timetable a bit, and this is the type of game that the Dawgs need if they plan on playing meaningful basketball in March.

I think Georgia’s ready to play this game at home and Kentucky isn’t quite as good as its record suggests. Give me Georgia to land a cover. He who has the most information wins! We all know that! You not only need to know the best information about teams, but where the best priced odds are, who pays fast and who has the best offerings. If you’re a parlay player, you should be betting your picks at Sportbet. They’re parlay odds pay more than anywhere else in the world. This includes everything from 2-teamers to 15 teamers! They have 20 point teasers too! Check all this out by clicking here! It only makes sense to get paid more for making the same bets you’re already making!