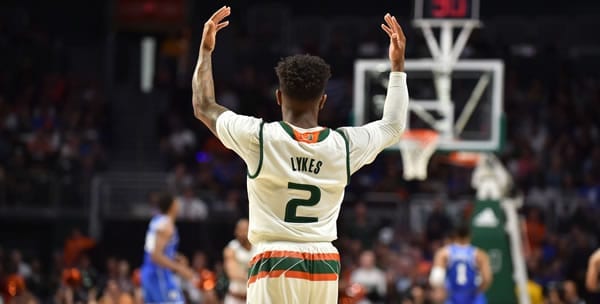 The ACC might be down this season, but don’t try telling that to the Hurricanes, who have faced a gauntlet of top opponents in January. So far, Miami has already played Duke, Louisville, and Florida State this month, and Tuesday marks the completion of a stretch that has seen Jim Larranaga’s crew face the best the league has to offer four times in six games. The real question for the Canes is whether this stretch is wearing the team down. Miami is not a deep team by anyone’s standards, and the Canes played with a rotation of just seven players against Florida State in a game that ended in overtime. The Seminoles used nine players in their rotation and were fresher at the end, which might have been vital in helping them overcome a nine-point deficit in the final five minutes of regulation.

Now they’ve got to face the team that hammered them at the start of the month, and they’re coming to Durham at what is clearly an awful time to face Duke. The Blue Devils come off two losses, and Duke hasn’t lost three in a row since January of 2016, which means Miami has its work cut out for it.

More Picks: UGA at UK Against the spread prediction >>>

After losing two in a row, how does Duke respond? The Blue Devils played well in the second half against Louisville, but the Cardinals had built up their edge to the point that it didn’t matter, in large part because Duke only shot 37 percent and had to play most of the game without Vernon Carey thanks to foul trouble. The encouraging sign for Duke is that it didn’t give up in a difficult situation. Still, on the other side of the coin, the Blue Devils also proved their own worst enemy with 16 turnovers, which allowed Louisville to pull out the win despite Duke doing a first-rate job of defending the Cardinals’ best player.

That shouldn’t repeat against Miami, mainly because the Hurricanes don’t have the defense to match up with Duke. Louisville had held 10 of its last 11 opponents under 70 points (Kentucky was the one exception, and that game went to overtime); Miami has allowed three of its past five opponents to hit 80.

Fatigue. Is Miami mentally ready to stay in this game and keep pace with Duke? The Hurricanes have been through quite a bit in the past 2½ weeks, and they already lost by 33 the first time they faced the Blue Devils. That was, in large part, to their inability to stop Duke from getting good looks at the basket, as the Blue Devils shot over 60 percent while the Canes couldn’t hit much of anything from Duke.

Given that Miami uses so few players and just lost a tough game on Saturday, I’d be shocked if Mike Krzyzewski doesn’t tell his team to put the hammer down out of the gate and try to sprint its way to victory. Duke likes to play fast anyway, and against an opponent that has little reason to be confident and a total lack of bodies to fight through fatigue, the Blue Devils could easily tire out the Hurricanes in the first 15 minutes of the contest. Miami has to find a way to fight through its mental and physical exhaustion, or this game won’t be close.

Miami will Cover if:

Chris Lykes can get his shot to drop. Nobody means more to the Hurricanes than Lykes, who leads Miami with 16.1 points a game and is one of three Hurricanes to average more than 30 minutes per game. In the first meeting with Duke, Lykes’ shooting was way off, as the junior shot 2-for-15 against the Blue Devils, and nobody else picked up the slack, leading to a 33-point loss. Miami doesn’t have enough behind Lykes to be able to withstand a bad game from him against a good team; the Hurricanes have to have him hitting shots if they’re going to stay in the game.

The Blue Devils can attack the interior and hit their shots. In the teams’ last meeting, Vernon Carey showed Miami fans just what they were missing as he came home to South Florida and dominated with 24 points and nine rebounds, both of which are career highs against ACC competition. What made matters worse for Miami is that Carey only plays about 25 minutes a game, meaning that he averaged just under a basket every two minutes. There’s no way that Miami can keep pace with Duke if Carey’s getting a basket every other trip down the court because he’s got more than enough help to make that stand.

You shouldn’t read too much into the first game. Duke won by 33, but the Blue Devils also shot the lights out in South Florida, and Miami couldn’t hit a thing from the perimeter. That probably won’t happen again, but that doesn’t mean that Miami is going to be more competitive this time around. The Hurricanes are losers of four of their past five, and even if Lykes is hitting his shots, Duke is coming in ticked off about losing twice to Clemson and Louisville, and that usually means that the next team is in for a nightmare.

This Duke team is every bit good enough to make this trip a nightmare for the Hurricanes, and I have to wonder where Miami’s confidence is after the Hurricanes lost a game they had no business losing to Florida State. That kind of loss can deflate a team, especially when it comes to your biggest rival. I can’t see Miami recovering from that quickly, and I really can’t see the Hurricanes recovering from that and getting a result against the likes of Duke. Give me the Blue Devils, and I’ll take the over along with them.