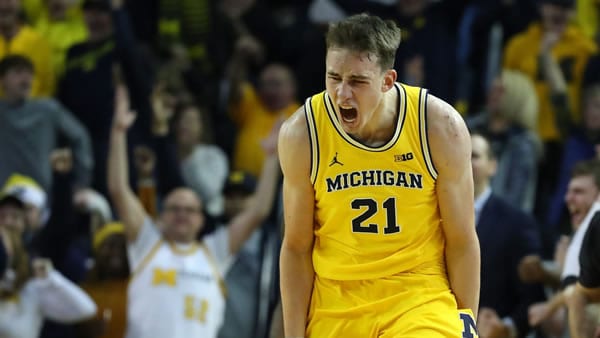 The final week of the Big Ten season comes to a close with something that will likely never be repeated, as COVID cancellations forced the Big Ten to end the year with back-to-back games between the Spartans and the Wolverines. There’s also plenty of intrigue around this game, as Michigan is trying to lock down a No. 1 seed while Michigan State just wants to qualify for the tournament.

If history is any indication, though, this one might not be all that close, as Michigan State has really struggled when it’s left East Lansing. At first glance, 65 miles down Interstate 96 might not seem to be a big deal, but Michigan State has managed a mere three road wins all season, beating only Duke, Nebraska, and Indiana. While those wins are likely to be helpful when it comes to whether Michigan State qualifies for the tournament, it’s not really all that impressive as a whole. On the other hand, Beating Michigan would make a big difference in the Spartans’ case, as they’d have a win that no other bubble team could even come close to matching.

On the other hand, Michigan comes in looking to make up for an embarrassment, as the Wol-verines played Illinois with the Illini missing their best player and still got blown out from start to finish. This marks the Wolverines’ final home game, and ending the season with back-to-back losses at Crisler Center could be what costs Michigan its No. 1 seed. Can the Wolverines instead deal a critical loss to their in-state rival?

Betting the Spartans has not been easy or fun, as Michigan State has been inconsistent all sea-son long. The Spartans have the talent to win games against the likes of Illinois and Ohio State, but they also got drilled by Maryland in their most recent road game.

Besides the inconsistency, the major problem for Michigan State has been its defense. The Spartans did seem to figure things out on defense against Indiana, holding the Hoosiers to 58 points, but that was also in large part because Indiana stubbornly refused to use its best weapon against a team that isn’t really designed to stop an inside game. Michigan won’t make that mis-take, which means the Spartans have to get more contributions across the board, as the offense has mostly been Aaron Henry, Joshua Langford, and little else.

The big key there will be whether Tom Izzo got through to his team after the starters barely showed up at Maryland, which led to Gabe Brown and Rocket Watts opening the game with In-diana on the bench. Michigan, unlike Indiana, isn’t going to give Michigan State time to work through any issues, which means the Spartans need to have everyone on the same page from the tip.

Michigan proved it’s human by playing its worst game of the season against Illinois, as the Wol-verines didn’t do much of anything right in that contest. Nobody from Michigan except Austin Davis shot the ball well, and the Wolverines’ rebounding was such a mess that two of Illinois’ guards grabbed more rebounds than center Hunter Dickinson.

However, it’s easy to overreact to that performance and forget just how good Michigan has been this season. Most of the time, the Wolverines play fantastic defense and operate with plenty of efficiency on offense, and a repeat performance is highly unlikely. As long as Michigan doesn’t get it in their heads and essentially allows the Illini to beat them twice, this is a strong team with a great inside-outside presence that’s a matchup nightmare for most Big Ten teams.

But that said, expect Isaiah Livers to try to place the Wolverines on his back in this game, as this is his last chance to show what he can do against his in-state rival. The senior from Kalamazoo has never played well against Michigan State, so this will be a highly motivating situation.

Internal pressure. Both teams have plenty of motivation, but which one really wants this more? The Wolverines are trying to wrap up the Big Ten title and can do it with one win, while Michigan State can basically wrap up its spot in the tournament if it can get both of these games. On top of that, each can ruin the season for one of its biggest rivals. The Wolverines would love to help keep Michigan State out of the tournament (which probably happens if the Spartans lose twice and then fall to Rutgers or Maryland in their first Big Ten tournament game), and the Spartans would be thrilled to sweep both games and hand the league title to Illinois at Michigan’s expense.

The flip side of that is that with so much at stake, it is very easy to get overwhelmed and lose sight of the situation. Whichever team handles the internal pressure better will be in great shape.

The Spartans can hit some early shots. Michigan State needs to establish right away that this won’t be a repeat of Maryland, and the best way to do that is by getting hot in the first few minutes. If the Spartans don’t get off to a good start in this game, it’s tough to see them hanging around with Michigan.

The Wolverines can defend the way they have all season. They have the talent advantage on the Spartans, but if they play defense the way they did against Illinois, this can get pretty ugly pretty quickly. Michigan has to establish itself as the better team right away and dictate the pace.

As good as Michigan has been this season, this spread seems to be too high. Michigan State shouldn’t get bombed again, as the Spartans need this game too badly to fail to show up com-pletely. Most likely, these teams will play a tight defensive battle that’s decided in the final three or four minutes, the way Michigan likes to play.

I don’t think the Spartans get a win here, but I also can’t see them getting blown out. I’ll take Michigan State and the points, and I’ll pair it with the bet I like best, the under. Bet your college hoops picks FREE this week by taking advantage of a 100% real cash bonus offer on your first deposit of $100 to $300 at MyBookie Sportsbook! (Must use promo/bonus code PREDICT100 to get the bonus credited!) Click here to double your bankroll today!