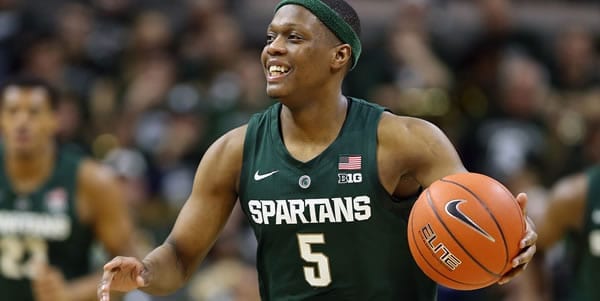 In the span of a week, the Spartans have gone from No. 1 to a squad beset by tragedy following the death of Zachary Winston, the younger brother of star guard Cassius Winston. However, Michigan State has apparently used the tragedy to band together as a team and play their best basketball, as they flattened Binghamton the way a top team is supposed to, getting a top performance out of Winston in the process.

Moving forward, Michigan State needs to find some more outside scoring. The Spartans do not shoot it well from deep, which can be a real Achilles’ heel for this squad. So can the 17 turnovers that Michigan State committed against Kentucky. The Spartans looked like they had cleaned that up against Binghamton, but there’s a massive difference between the Wildcats and the Bearcats. Seton Hall averages 9.5 steals per game in this young season, which presents an interesting test for Michigan State.

This game could have been Seton Hall’s big opportunity to knock off the No. 1 team in the nation, but Michigan State first lost to Kentucky to drop from the top spot, and the Pirates then lost their star guard Myles Powell to a sprained ankle against Stony Brook. Powell could likely play if this were a conference game, but at this point in the season, the Pirates aren’t going to risk further injury to him, even against Michigan State.

Instead, Quincy McKnight will start in Powell’s place. Even without Powell, Seton Hall is a solid defensive outfit that doesn’t waste possessions and looks to be good enough to compete for a Big East crown this season. Whether they will, depends on whether they can keep getting a host of contributions. McKnight is one of three active Pirates who average better than 10 points a game (Powell also does, but isn’t counted because he almost surely won’t play), and two others contribute nine points a game. That kind of unselfishness is how good teams become great, and it could be a tough challenge for Michigan State.

The big stage. Are the Pirates ready for this moment? Seton Hall hasn’t been a factor nationally in quite some time, only sneaking into the NCAA tournament last season because of a run to the finals of the Big East tournament. Once they got on the big stage, the Pirates were no match for Wofford and were quickly dismissed. This Seton Hall team is talented, but missing their biggest piece for perhaps the biggest game that they’ve seen in the Prudential Center since it opened. Seton Hall has to stay within itself and not get overwhelmed by the big stage.

The Spartans can cut back on the turnovers. When Michigan State takes care of the basketball, the Spartans’ lack of 3-point shooting isn’t a problem. They’re talented enough to overcome poor deep shooting as long as they’re consistently getting two-point baskets on most of their trips down the court. But when the Spartans get sloppy, they become vulnerable. Michigan State has to take care of the ball in this contest.

Seton Hall will Cover if:

The Pirates can hit their free throws. Seton Hall is going to find itself in a close game, and 68 percent from the stripe isn’t going to cut it when that occurs. If the Pirates are making their foul shots, they have the shooting needed to keep pace with Michigan State. But if they aren’t hitting, they’re going to be hard-pressed to stick with the Spartans.

The Big East really seemed pretty weak last year, and that wasn’t helped on Wednesday when Villanova got hammered by Ohio State. The Wildcats are the Big East’s flagship program and seeing them get routed this early suggests that the league might be down this season.

Seton Hall could be in a position to step into Villanova’s void, but I’m not taking a chance on the Pirates here with Powell on the shelf. Give me the Spartans in this matchup.