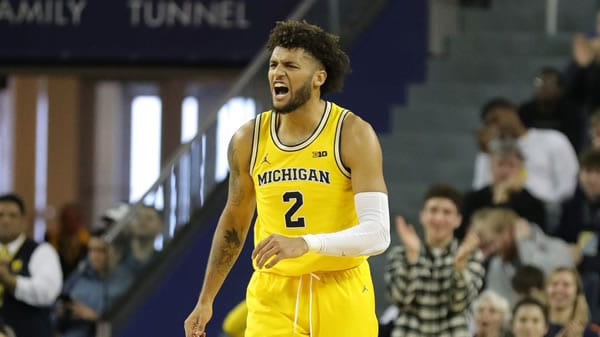 After nearly a month off because of COVID, Michigan is finally ready to return to the court, and the Wolverines will do so with a tough matchup against Wisconsin. Michigan could very well be a top seed when all is said and done, but because they haven’t played anybody at all since Janu-ary 22, nobody is quite sure what the Wolverines are going to look like when they make their way back to the court.

No surprises exist with Wisconsin, as the Badgers have simply plodded their way to a solid fourth place in the Big Ten. Chances are, though, that they vividly remember what happened when these teams met in Ann Arbor: Michigan hammered the Badgers by a 77-54 count, a game that went a long way toward establishing the Wolverines as the team to beat in the Up-per Midwest. That was the kind of performance that Wisconsin does to its opponents, not one that the Badgers have done to them. Can they bounce back and show the Wolverines just how much has changed since they last took the court?

When we last saw Michigan on the floor, the Wolverines were perhaps the best team in the na-tion this side of Gonzaga and Baylor. Outside of going to Minnesota, where the Golden Gophers would probably find a way to beat the Lakers, Michigan has been dynamite this season, and the Wolverines’ rout of Wisconsin in Ann Arbor was concrete proof of just how talented they are.

Teams usually don’t shoot 50 percent from the field against Wisconsin, and when they do, it’s almost never because they shot 56 percent from behind the arc. But that’s exactly what Michi-gan did in the first matchup, and to make matters worse for the Badgers, the Wolverines did it without relying on any one specific player to do the damage. Isaiah Livers did the most work against the Badgers by hitting three of five from beyond the arc, but Michigan is clearly com-fortable doing a little at a time and taking what’s available. Against a team like Wisconsin, that’s a very worrying prospect for the team playing defense.

When D’Mitrik Trice and Micah Potter are hitting their shots, Wisconsin is in good shape. When they’re the only ones who are hitting their shots, the Badgers are in trouble. Wisconsin is not meant to have just one or two players dominating the game, and that was the big problem the first time they went up against Michigan. Trice and Potter were the only ones who did much of anything from start to finish in that contest, as the rest of the team managed a mere 22 points. Other than the lack of shooting, there was plenty to like about Wisconsin’s performance in Ann Arbor, as the Badgers didn’t beat themselves with turnovers and came up with 12 offensive re-bounds. But when you shoot just 31 percent from the floor, you aren’t beating Michigan.

Rest or rust. The Badgers have been playing and winning, while the Wolverines have been watching from their apartments. That kind of situation can work either way, but it’s often been the case that a team that’s coming off a COVID layoff comes out flat and takes a long time to overcome its time off. That was certainly the case for Florida State, for example, as the Sem-inoles needed overtime to beat a below-average Wake Forest squad on Saturday. Michigan hasn’t shot anywhere except Ann Arbor for a month now, and that could be a real problem when the Wolverines actually take the court somewhere else. This might be a good live-betting opportunity, as there’s a good chance that Wisconsin jumps out to a good lead while Michigan gets its legs underneath it.

The Wolverines spread their scoring as well as they did in the first matchup. Michigan is at its best when it gets contributions from all over the floor, and Wiscon-sin’s defense is meant to take away the thing that an offense does best. That doesn’t really work against Michigan as long as the Wolverines are playing their game, which means that if the Wolverines are on, they should control this game.

The Badgers jump out to the early lead. Wisconsin is not on Michigan’s level for 40 minutes, but if the Badgers can get off to a good start in this one, they could throw Michigan off their game and cause the Wolverines to question whether they’re really ready to play this game.

Michigan coming in cold worries me. The Wolverines are not going to immune to having sat around for three weeks, and Wisconsin is good enough to take advantage of that kind of situa-tion. It’s not an ideal situation for the Wolverines, and that’s why I’d rather live bet them and get some points if I take Michigan here. For this pick, though, I’ll take the Badgers at home.