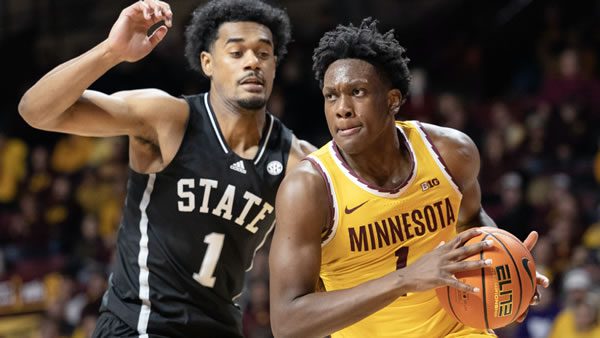 The Minnesota Golden Gophers travel to Columbus to take on the Ohio State Buckeyes in Thursday night college basketball action. The host Buckeyes are a large -14.5 to get the money, with the total line offered up at 137 points.

Minnesota most recently fell to Nebraska (81-79). Not only did the Golden Gophers lose straight-up, but they picked up an ATS defeat as +3 point underdogs. The combined 160 points finished above the 130.5 total line.

Ohio State most recently fell to Maryland (80-73). Not only did the Buckeyes lose straight-up, but they picked up an ATS defeat as +2 point underdogs. The combined 153 points finished above the 136.5 total line.

Minnesota
Over their last five games, Minnesota has a straight-up record of 2-3 while going 2-3 vs. the spread. Over this stretch, the Golden Gophers’ offense averages 64.0 points per game while hitting 42.9% of their shots from the field. On the defensive end of the floor, they have allowed opponents to shoot 42.8% from the field while allowing 64.8 points per contest.

Ohio State
In their previous five contests, Ohio State is 3-2 straight up and 3-2 vs. the spread. In these five games, they have a scoring average of 80.0 points per game on a shooting percentage of 50.7%. Defensively, they allow teams to hit 39.1% of their shots while giving up 65.6 points per game.

How Does Minnesota Fare On The Road?

For the season, the Golden Gophers have played four road games and have a record of 0-4. In these contests, Minnesota is 3-1 vs. the spread. Offensively, they have averaged 62.2 points per game on a shooting percentage of 41.2%. On defense, the Golden Gophers allow 72.5 points per contest when playing away from home. So far, opposing teams have a field goal percentage of 45.1% in these games.

How Does Ohio State Fare At Home?

For the season, Minnesota is averaging 67.0 points per game (333rd) while posting an overall field goal percentage of 43.8%. In today’s game, they will be matched up against an Ohio State defense that has allowed an average of 65.9 points per contest. This year, opponents have hit 40.4% of their shots vs. Ohio State. On the other side, the Ohio State Buckeyes are coming into the game averaging 73.8 points per game on a shooting percentage of 47.4%. The Buckeyes will be facing a defensive unit allowing an average of 67.5 points per contest. So far, teams have hit 42.4% of their shots vs. the Golden Gophers.

From beyond the arc, Minnesota has a shooting percentage of 36.8% while ranking 410th in attempts per game. The Golden Gophers will be facing an Ohio State defense that has a 3-point field goal shooting percentage allowed of 29.5%. Ohio State enters the game having hit 37.3% of their looks from deep while averaging 8.1 made 3’s per game. On the other end, Minnesota has allowed opponents to hit 35.1% of their shots from beyond the arc.

It’s difficult to forecast how a team will respond to back-to-back tight losses. This is exactly the situation the Golden Gophers are in today after losing on the road 63-60 against the Badgers and at home in overtime 81-79 to the Cornhuskers. That said, Minnesota is on the improve. After losing their first five games, they won a pair of games over lesser opponents before the two narrow losses. So, what has driven the improvement? Experience. The Gophers have three freshmen playing over 20 minutes a game and another freshman getting over 18. Take Minnesota +14.5.