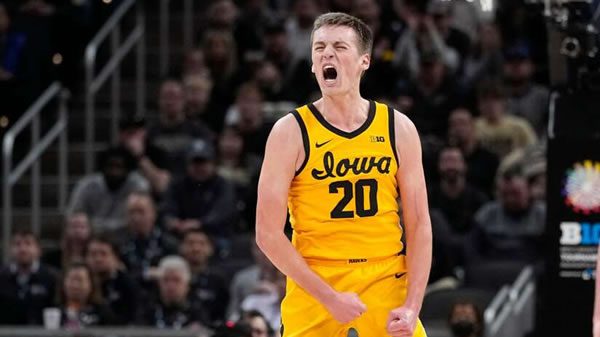 The Wolverines head to Iowa to take on the Hawkeyes on Thursday night at the Carver-Hawkeye Arena. The current college hoops board lists Iowa as the -5 point spread with a total line of 155. Tip-off for the game is set for 7:00 PM ET, and you can watch it on ESPN.

The point spread line has been on the rise, opening at most betting shops at Iowa -4, and now most boards are hanging a -5. The total has been up and down, and this is really a game that you should be shopping for lines if you are playing the total with current lines ranging from 154 to 155.5.

Michigan most recently fell to Michigan State (59-53). Not only did the Wolverines lose straight-up, but they picked up an ATS defeat as +3.5 point underdogs. The combined 112 points did not surpass the 138.5 total line.

Iowa will be looking for another win, as they most recently defeated Rutgers by a score of 76-65. The Hawkeyes also picked up an ATS victory as they were +5.5 point underdogs. The combined 141 points finished above the 140 total line.

Michigan
Over their last five games, Michigan has a straight-up record of 2-3 while going 3-2 vs. the spread. Over this stretch, the Wolverines’ offense averages 70.0 points per game while hitting 41.6% of their shots from the field. On the defensive end of the floor, they have allowed opponents to shoot 39.9% from the field while allowing 63.4 points per contest.

Iowa
In their previous five contests, Iowa is 2-3 straight-up and 2-3 vs. the spread. In these five games, they have a scoring average of 75.8 points per game on a shooting percentage of 40.3%. Defensively, they allow teams to hit 49.5% of their shots while giving up 79.0 points per game.

This season, the combined power rating of Michigan’s opponents comes in at 79.7. On the other side, Iowa’s combined opponent power rating sits at 79.1.

For the season, the Wolverines have played seven road games and have a record of 3-4. In these contests, Michigan is 4-3 vs. the spread. Offensively, they have averaged 75.6 points per game on a shooting percentage of 44.1%. On defense, the Wolverines allow 73.9 points per contest when playing away from home. So far, opposing teams have a field goal percentage of 47.3% in these games.

How Does Iowa Fare At Home?

In their 11 games at home, Iowa has an 8-3 record vs. the spread while going 8-3 straight-up. On offense, the Hawkeyes are shooting 47.0% on their home floor, leading to 86.2 points per game. Defensively, opponents are shooting 44.8% in these contests. The Iowa defense is allowing 72.1 points per game at home.

For the season, Michigan is averaging 73.0 points per game (142nd), while posting an overall field goal percentage of 46.8%. In today’s game, they will be matched up against an Iowa defense that has allowed an average of 72.1 points per contest. This year, opponents have hit 44.9% of their shots vs. Iowa. On the other side, the Iowa Hawkeyes are coming into the game averaging 83.8 points per game on a shooting percentage of 46.4%. The Hawkeyes will be facing a defensive unit allowing an average of 68.7 points per contest. So far, teams have hit 42.5% of their shots vs. the Wolverines.

More Picks: Get our expert betting opinion on the Gophers at Buckeyes 1/12/23 game >>>

From beyond the arc, Michigan has a shooting percentage of 34.0% while ranking 550th in attempts per game. The Wolverines will be facing an Iowa defense that has a 3-point field goal shooting percentage allowed of 33.2%. Iowa enters the game, having hit 36.8% of their looks from deep while averaging 9.29 made 3’s per game. On the other end, Michigan has allowed opponents to hit 34.5% of their shots from beyond the arc.

I think this line is too high. Michigan has been playing very well after the embarrassing two-point loss to Central Michigan as a huge -21.5 favorite. They crushed Maryland 81-46 and Penn State 79-69 at home and battled a very good Michigan State down to the wire on the road, trailing by just two with 12 seconds left before succumbing 59-53. That was only their second true road game this season, with the other being a 90-75 beatdown of Minnesota. The defeat at the hands of the Spartans was the Wolverines’ (3-1) first in Big Ten play which is far superior to the Hawkeyes, who are just 2-3, albeit arguably against better competition. I’ll take the points and back a team that could win this game outright. Take Michigan +5.