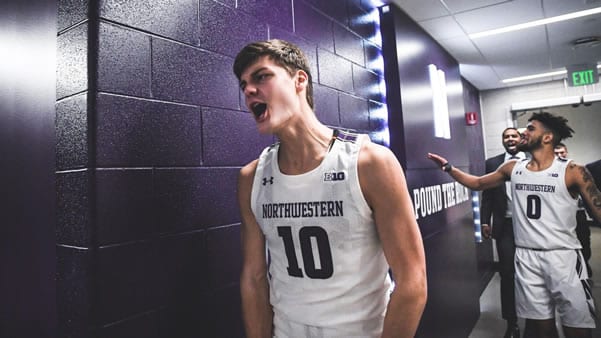 Well, Northwestern, now it’s time to prove whether you’re really for real. The Wildcats have earned their way into the top 25 with three straight wins in the Big Ten, and that’s no small feat. But between them, but that also hasn’t really proven much of anything. Between them, Ohio State, Indiana and Michigan State are 1-6 in the Big Ten, so it remains to be seen as to whether those really were good wins or not.

Beating Iowa on the road would unquestionably be a good win, as the Hawkeyes’ only losses have come in overtime at one of the toughest road trips in the Big Ten and to the No. 1 team in the nation on a neutral floor. However, both of those have come in their past two games, which could lead to serious questions about whether the blueprint has been established for beating Iowa if the Hawkeyes can’t get back on track. Can Iowa get its guards going and get Luka Garza the help he needs?

What’s been the constant for Northwestern during its 3-0 start in the Big Ten? Defending the arc. The Wildcats held both Ohio State and Michigan State to under 30 percent from downtown, and even though Indiana hit a reasonable percentage at 38 percent, the Hoosiers only had three players score more than six points, limiting the amount of damage the Wildcats had to withstand.

On the other side of the floor, Northwestern benefits from a pair of excellent shooters in Miller Kopp and Boo Buie. Both shoot 50 percent or better from beyond the arc, and both are excellent at the free throw line, making it rather difficult for opponents to take one of them away. But when both have an off night, as happened against Pittsburgh, the Wildcats really don’t have an answer to supplement their offense. At least one has to be on for Northwestern to have any chance.

Get reduced juice on point spread and total bets at BAS Sportsbook!

Minnesota might well have provided the blueprint for facing Iowa: don’t worry about Luka Garza and focus on the Hawkeye guards. Garza ended up getting 32 points, but Joe Wieskamp and Jordan Bohannon were essentially non-factors, shooting 6-for-22 and allowing the Gophers to get the game to overtime and win it there. And that’s the problem with Iowa: the Hawkeyes are an entirely offensive-minded squad that can’t get the job done when one or more pieces of their attack get taken away. When something goes wrong for any of their main guns, Iowa doesn’t have the defense it needs to fall back on and win games for it.

That said, Garza should have a major edge in the paint in this game and Northwestern will have a hard time keeping him from dominating on the glass. If Garza is able to dominate the second chance points and put in his teammates’ misses, it won’t matter if the Hawkeyes struggle from the arc again. But if Northwestern can avoid losing the rebound battle, Iowa will be in trouble.

Contrasting styles. Iowa loves to run up and down the court from first whistle to last, while Northwestern is far more comfortable playing at a slower pace and emphasizing its defense. Obviously, both things cannot happen in the same game, which makes establishing the tempo early a critical part of this game.

This might be a good one to live bet, as the first five minutes should tell us a lot. If the game starts out high-scoring, it will favor Iowa; if not, Northwestern is likely to hang around from beginning to end.

Northwestern will Cover if:

The Wildcats can stop the Iowa guards. Stopping Garza is likely out of the question for the Wildcats, but Northwestern has defended the 3-point line well all season and should be able to make life tough for the Hawkeye guards. Garza cannot do it alone, and if Northwestern can force him to do too much, it has a good shot.

The Hawkeyes get their guards going from outside. Take away Northwestern’s 3-point defense, and the Wildcats really don’t have any way to keep up with the Hawkeyes. If Iowa is hitting early and often, Garza will be able to do whatever he wants and kick it out whenever the Wildcats collapse on him. The first five minutes are critical to Iowa; the Hawkeyes have to use their advantages well.

If Northwestern follows Minnesota’s blueprint, and it’s well-equipped to do so, it’s going to stay in this game. The Wildcats have already shown that they can win on the road in this league and shouldn’t be intimidated going to Iowa City, and if they weather the storm in the first few minutes, this should be a tight contest.

I think the emphasis on 3-point defense gives Northwestern an edge here. I’ll go with the Wildcats and the points. Did you know that you can move the line up to 20 points on football games at BAS Sportsbook? Their teasers are MASSIVE!