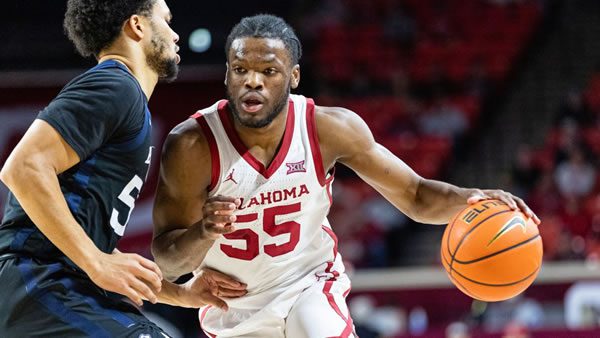 With top teams dropping like flies (hello, Purdue), the Bears have been the one team that’s managed to stay above the fray and keep its run going. Baylor had a very losable game on the slate on Saturday against previously unbeaten Iowa State and did enough to hang on and stay perfect on the year. But eventually, the bubble is going to pop, in large part because Baylor doesn’t make enough of its free throws to close games out without having to sweat against really good teams.
Oklahoma is still trying to prove that it qualifies, as first-year coach Porter Moser has a team that has most of the ingredients needed to be successful in both the Big 12 and nationally. Oklahoma shoots it well, plays strong defense, and rebounds well on the defensive end. But the Sooners have a fatal flaw: they make far too many mistakes with the basketball. Averaging close to 15 turnovers per game isn’t exactly going to make you an efficient or effective offense, and it’s only because the Sooners shoot so well that they win games. But against Baylor’s 10.5 steals per game, that might not be enough.

At first glance, Oklahoma is a team that most coaches would love to have. The Sooners can all shoot pretty well, as six of their seven top scorers shoot 40 percent or better. They don’t have a true center, but they have range, as all of their starters and most of their reserves can score from the arc. They rebound well enough to get by (Tanner Groves in particular), and they can almost all create their own shots.
But the turnovers are a real killer that has left Oklahoma playing games that are much closer than they should at times. Sometimes, Oklahoma leaves little doubt as to its true power, as it did when it met Arkansas on a neutral court in Tulsa and blasted the Razorbacks by 22. Other times, such as against a reasonably weak Butler squad, the Sooners’ turnover issues combine with an off-shooting night and turn into an ugly loss. Betting the Sooners is a roller coaster, as you never know what you’ll get with them.

Where Oklahoma has a high ceiling and low floor, Baylor offers consistency. The Bears are usually going to score somewhere in the 70s and will usually do it with guard play. LJ Cryer is now a genuine star now that he’s gotten the playing time the Bears just couldn’t give him a year ago, and the rest of the Bears have proven they can step up and score just as easily.
On top of that, the Bears still play excellent defense, which they had to do against Iowa State. The Cyclones had the game there to be won but shot 1-for-14 from behind the arc against the Bears’ defensive work. The foul shots are still a concern, but Baylor hit them against Iowa State and could simply be a case of not having seen pressure yet.

Oklahoma will Cover If: The Sooners can end their possessions with a shot. Oklahoma will take its chances against Baylor’s rebounders (the Bears are statistically good on the glass but don’t have a ton of height), but the one thing the Sooners cannot do is allow the Bears to get easy buckets via steals. Baylor’s defense will be tough enough to handle; Oklahoma can’t make their job easy.

Baylor will Cover If: The Bears can hit a few early shots and get themselves on a run. The faster Oklahoma has to play, the more likely it is to make the kind of mistakes that can help Baylor turn this game into a rout. Baylor can handle a faster tempo and should push it here.

With the number sitting on 137.5, this looks like an over spot. Baylor is likely to try to push for possessions, and Oklahoma is going to have to keep up. Baylor’s averaging 83.2 points a game, and Oklahoma is usually good for around 70 points.

This line looks a little high. Baylor is a great team, but 13 points better than an Oklahoma team that’s already slammed the likes of Arkansas? I don’t see that being the case. If the Sooners get overwhelmed by the Bears’ defense, I can see it, but I think Oklahoma can handle this well enough to stick close. Give me the Sooners. Question: When you bet on games, are you laying -110 or -105? There’s a 99.9% likelihood that you’re laying the heavier of the two. Did you know that there’s a sportsbook out there where you can bet at reduced odds -105? Imagine how much money you’d have saved over the past few years! TONS! Educate yourself about betting at reduced vig TODAY! You’ll be so glad you did!