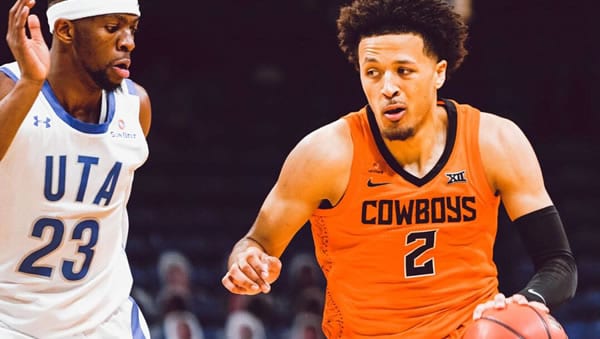 One side is surging at the right time, while the other is in danger of falling to the wrong side of the bracket. With three losses in its past five games, Kansas is suddenly looking at falling toward the 8-9 line and getting an early matchup with the likes of Gonzaga or Michigan (they’d be spared from facing Baylor by virtue of both being in the same league. At 12-7, there’s a real danger of Kansas missing the field entirely, which hadn’t happened since 1989, when the Jayhawks were ineligible to make the tournament.

On the other hand, Oklahoma State has won five of its past seven games and picked up a huge boost on the profile by beating Texas in double overtime on Saturday. The Cowboys have several opportunities left to grab good wins, and as long as they can hold serve at home against Kansas State and Iowa State, there won’t be any bad losses on their profile. The thought that Oklahoma State might finish with a higher seed than Kansas would have seemed impossible a few weeks ago, but it’s now a very real possibility. Can the Jayhawks reverse the slide here?

By now, most people know about Cade Cunningham, who might very well be the No. 1 pick in the upcoming NBA draft. But the Cowboys have a lot more depth to their name than that, and Kalib Boone put that on full display in the win over Texas, as he led Oklahoma State with 22 points and helped make up for Cunningham shooting a mere 5-for-22 from the floor.

What makes Oklahoma State difficult for opponents to figure out is that the Cowboys are willing to adjust based on what the game gives them, an adjustment few teams are willing to make. Cunninngham will always be a large part of the Cowboy attack, but beyond him, Oklahoma State will go to whoever gives it the best chance to win on that night. Case in point: Boone was a non-factor when the Cowboys played Kansas in Stillwater, scoring just two points in 16 minutes. But Bryce Williams got hot from outside, scored 17 points, and Oklahoma State saw no need to reach into its bench. About the only strategy that’s certain to work — assuming you can pull it off — is to stop Cunningham from taking over the game. But even that’s dicey; Cunningham shot 5-for-22 against Texas, and the Cowboys still found a way.

The last coach to fail to get Kansas to the NCAA tournament in a year when the Jayhawks were eligible to participate was Ted Owens, who guided Kansas to back-to-back losing seasons in 1982 and 1983 and was immediately rewarded with a request that he seek employment elsewhere. Bill Self isn’t going to suffer the same fate as Owens (after all, he has a national title to his name, and Owens is the only coach Kansas has ever fired), but the chance of Kansas missing out on the tournament has become a very real possibility in Lawrence.

What Kansas needs to do is replicate what it did for the first 38 minutes in Stillwater against Oklahoma State. In that game, the Jayhawks held a slim lead with two minutes to go, only to watch the Cowboys score the final seven points and emerge with a 75-70 victory. The big the Jayhawks did well was make David McCormack a factor, as the Kansas big man took 18 shots and hit 10 of them on his way to a 24-point performance. Too often, the Jayhawks have gone away from the interior and focused too much on guard play, which is far from ideal against Oklahoma State.

To get a win here, Kansas is either going to have to make McCormack its focus or get more out of Marcus Garrett and considering that Garrett hasn’t really been anything close to what was expected this year, McCormack is the way to go.

Allen Fieldhouse. Kansas doesn’t have more than 2,000 people in the building at the Phog these days, but the Jayhawks have shown themselves completely incapable of playing outside of their venerable home this season. The only exception to the Jayhawks’ losing in the past seven games have been the two played at Allen Fieldhouse, against TCU and Kansas State.

However, the question is why Kansas won those games. Was it because the Jayhawks are just more comfortable at Allen Fieldhouse, or was it because TCU and Kansas State are weak teams who are going nowhere this season? The fact that Kansas managed to beat Oklahoma at home before losing to the Sooners in Norman suggests that it’s the former, but Kansas also got squashed by 25 against Texas at home. Whether the Phog is still the edge it always has been for the Jayhawks will go a long way toward determining this one.

The Jayhawks get McCormack established early and often. Kansas’ big edge here is its interior game, and that means inside baskets and rebounding. McCormack has to be the same force that he was in Stillwater for the Jayhawks to grab a win here.

I get that Kansas is playing in Lawrence, but I really just don’t see the Jayhawks covering in this game. Kansas isn’t playing up to its potential and looked rather soft against West Virginia. Allowing 91 points just isn’t what a typical Jayhawks team does, even when the game is on the road.

With a lack of fans to provide the intimidation, I can’t see Oklahoma State being scared of this situation. Give me the Cowboys. Tough Super Bowl? Instead of re-depositing into your current sportsbook account and receiving NOTHING, you might want to consider taking advantage of a 100% real cash bonus on your first deposit of $100 to $1000 at Betnow Sportsbook!