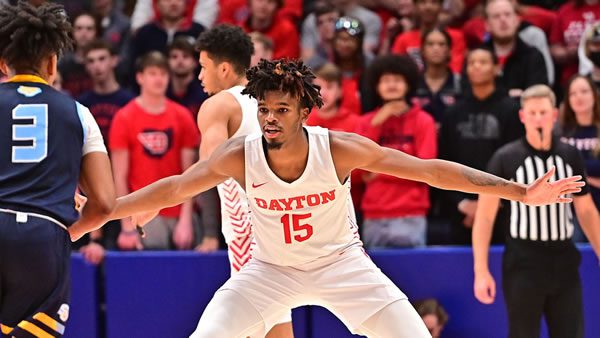 We’re starting to get into must-win territory for the Flyers, who don’t have many chances for quality wins in the Atlantic 10 and can’t really afford to take a bad loss. Dayton still has an outside shot at an at-large bid because of neutral-site wins over Miami and Kansas, but the rest of its profile is looking less impressive by the day, and with only three real opportunities to build the resume left, Dayton really cannot afford a Quad 3 home loss to Rhode Island.
After taking two home losses to Richmond and George Washington, Rhode Island’s chances are slim at best and would fall to completely non-existent if the Rams lose here. Dayton is likely the best team left that the Rams will see outside of Kingston, R.I., but Rhode Island’s in kind of a catch-22 situation here. A loss to Dayton would mean it’s a Quad 1 defeat because it’s on the road, but a win over the Flyers would knock Dayton out of Quad 1 and make it a Quad 2 victory, which doesn’t exactly help the profile. Realistically, Rhode Island’s best hope is for this and the return game in Kingston to be the only games on the schedule that Dayton doesn’t win.

When the defense is getting the job done, Rhode Island is pretty tough to beat. When the Rams send teams to the foul line, it’s not going to go very well. The latter was the case Tuesday when Rhode Island completely collapsed against Richmond, watching a 15-point second-half lead turn into a seven-point loss. The Rams managed one basket in the final 7:55 on Tuesday, a 3-pointer from Jalen Carey that should have been a momentum boost. Instead, the Spiders overcame the deficit with foul shots, scoring nine of their final 15 points from the stripe.

And that sums up Rhode Island basketball pretty well: the Rams pride themselves on tough defense and denying shots, but their aggressiveness on defense has the potential to cost them. Rhode Island ranks third in the nation in blocks thanks to Makhi Mitchell (3.1 blocks per game out of the team’s 6.5 average), but there’s no way to block a foul shot. Throw in the Rams’ offensive nosedives, and this team has several key flaws that make it tough to trust them.

If correct score betting were a thing in basketball, Dayton at home would be an excellent bet to make. The Flyers have scored exactly 68 points in their past three games and got 69 in a fourth. What that tells us is that this team knows what it’s going to do on offense, and whether it wins or not will be dictated by its defense and its tempo.

Put simply that means Dayton’s going to take the air out of the ball and make its opponents wait around. It’s not uncommon to see a team in the 50s against Dayton; it’s happened in six of the Flyers’ past ten games (and George Mason and VCU scored in the 50s in wins over Dayton). This team knows that it has to slow the game down to get wins because the offense just can’t run with most defenses. When the Flyers shoot well, they’re very difficult to defeat, but bad shots and turnovers often make this team too dependent on the defense.

Rhode Island will Cover If: The Rams can play fierce defense inside without fouling. Dayton isn’t a great team at the stripe, but even average foul shooting teams still hit about 70 percent of the time. If the Flyers are getting to the line regularly, this isn’t going to work out for Rhode Island.

Dayton will Cover If: The Flyers can frustrate the Rams early and force them to get off to a bad start before they have a chance to build confidence. Dayton’s defense can suffocate an opponent in the right situation, so if the Flyers are playing strong defense early, the Rams are in trouble.

With how Dayton has played at home as of late and Rhode Island’s tendency to foul, I think there’s a good chance Dayton beats its total of 64.5 points. It might be ugly, but I think the Flyers get the job done and get just enough on the stat sheet.

I’m not going against Dayton at home while Rhode Island is reeling. The Rams could really use a Quad 1 win, but they likely finished off any chance they had of an at-large bid with the home loss to Richmond. Dayton needs to avoid a bad loss more than Rhode Island needs a good win. Give me the Flyers. Bet your college basketball picks for FREE this week by taking advantage of a 100% REAL CASH bonus on your first deposit of $100 to $1000 at Betnow Sportsbook! This biggest and bonus bonus offered on the web!