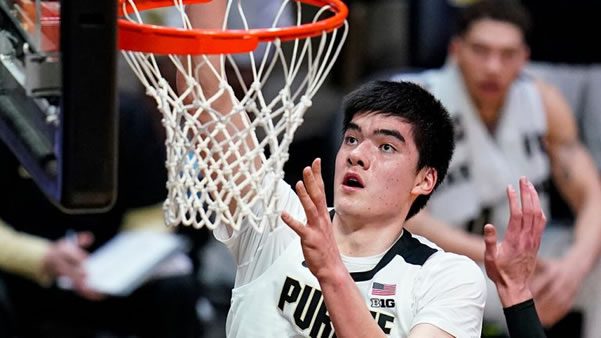 Is Purdue’s luck finally starting to change in this tournament? The Boilermakers have been a fairly snakebitten team over the years, but they’ve now gotten themselves to a Sweet 16 in which they’re the favorites to break through and reach the Final Four. Purdue hasn’t been that deep in the tournament in 42 years, last getting to the Final Four in 1980, but the Boilers might never get a better chance than they will this year.
They’re now up against Cinderella with a great defense, as Saint Peter’s comes in with a top-30 defense and the best cover rate in the nation. The Peacocks are a bettor’s dream because when they seldom cover without winning the game, having only done so twice all season. That includes the NCAA tournament, as the Peacocks were underdogs to both Kentucky and Murray State but managed to pull the upsets both times, never trailing in the win over Murray State. Saint Peter’s was never supposed to get anywhere close to this far, but the Peacocks are here now and playing with house money, which could make them a dangerous opponent. Plus, Saint Peter’s should have the crowd on its side, as none of the three other teams in Philadelphia are from this part of the country, while Saint Peter’s is less than two hours away in Jersey City, N.J.

The thing that’s helped Saint Peter’s pull two surprises is the fact that the Peacocks are experts in allowing opponents to get their points while still suffocating their attacks. Saint Peter’s might have given up 19 points to Justice Hill and allowed four Murray State players to reach double figures, but the Racers only shot 35% from the field and ended up with just 60 points in the contest. Against Kentucky, Kellan Grady and TyTy Washington shot a combined 3-for-19 from the floor, negating Oscar Tshiebwe’s dominance.
To beat Saint Peter’s, a team needs a strong inside presence as well as a good shooter from the outside who can find good shots and wait for them to come available. If you rush anything against this team, you’re going to find yourself back on defense and trying to stop Darryl Banks and KC Ndefo in a hurry. Saint Peter’s is also playing to get deeper than any 15 seed ever has before, which could work either way.

Purdue has the big edge inside with Trevion Williams and Zach Edey in the post, and the Boilers have to make sure to use it. Kentucky also had the size edge with Tshiebwe, but the Wildcats tossed it aside because they couldn’t get the ball inside often enough. Purdue either needs to make sure Jaden Ivey takes good shots or gets the ball in the paint where the Boilers can assert themselves.
The Boilers do have a big edge in the fact that Ivey is the best athlete on the floor and will be able to affect the game from anywhere, but Saint Peter’s excels at taking away option A. Purdue has won a game like that before when it beat Penn State, though, and the Boilers are going to have to use the lessons from that experience if they hope to move on here.

Saint Peter’s will Cover If: The Peacocks show the discipline and shooting that got them to this point. Saint Peter’s needs to keep up the performances it showed in the first two rounds and avoid complacency to keep the run going. Sometimes, a team gets to this level and simply runs out of gas.

Purdue will Cover If: The Boilermakers don’t allow the Peacocks to stick around. Purdue is the better team and needs to make sure Saint Peter’s knows it right away. The longer this game stays close, the more likely it is that Saint Peter’s will believe it can win.

With Saint Peter’s focusing on defense, don’t look for Purdue to light things up here. This looks like it will be played at a slower pace, and the under appears a solid play.

Two 15s have reached this level before, and one was competitive, and one wasn’t. Saint Peter’s is likely to be closer to the former. It’s tough to take them when they tend not to cover in games that they lose, but I think they’re playing so well that they can make life difficult for Purdue. Give me the Peacocks here. Bet your Peacocks vs. Boilermakers pick and ALL your March Madness bets for FREE this weekend by taking advantage of a 100% real cash bonus on your first deposit of $100 to $1000 at Betnow Sportsbook! It’s the biggest bonus you’ll ever find from a legit online sportsbook!