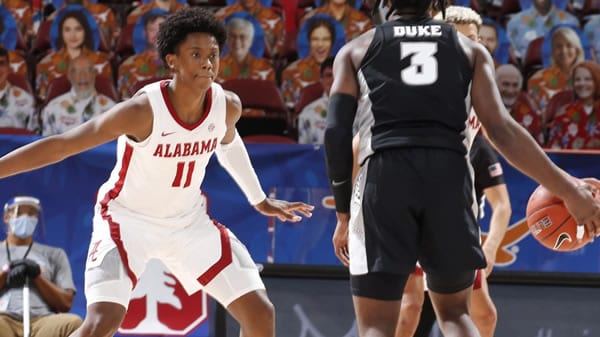 How far has LSU come since February? The answer will be on display in Nashville, as the Tigers get their third shot at an Alabama squad that has just tortured them this season. The teams met twice this season, and the Bayou Bengals were never close to playing with the Crimson Tide, losing by an average of 24 points per game. But LSU has improved a fair amount since that game, winning seven of its past nine games and setting itself up for a strong seed in the NCAA tournament.

Alabama probably isn’t going to be a No. 1 seed in the NCAA tournament, but the Crimson Tide would have some faint hope of snagging the final No. 1 seed at Michigan’s expense if they can beat LSU because they’d have two league titles to Michigan’s one and would have picked up another big win over a formidable opponent. But the seed isn’t really what matters to the Tide at this point. They’re more concerned about having the chance to compete for an SEC championship, which Alabama hasn’t won since 1991. LSU would love to bring home a trophy as well, as the Tigers haven’t been SEC champions since the early 1980s. Which team ends the drought and goes into Indianapolis on fire?

LSU’s played this game two different ways, and both have been one-way traffic. That’s because the Tigers haven’t managed to do one thing against Alabama: actually, put the ball in the net. LSU’s shooting has been poor against the Tide in both meetings this season, and the way the game has played out in that situation has been dictated by the way the defense played. When the Bayou Bengals got stops, they played a slower-paced game and held Alabama to 78 points. When they didn’t, they actually scored more points because Alabama plays so fast that it gives up many looks at the basket. But they also lost that game by 30 points because Cameron Thomas and Javonte Smart shot 10-for-31 while the Tide was doing whatever they wanted on offense. LSU looked much more in control against Arkansas, as Thomas and Smart combined to score 40 of the Tigers’ 78 points. They’ll have to be somewhere in that ballpark in order to keep up with the Tide’s offense.

Say this for Alabama: they are never truly out of a game. The Tide looked dead multiple times in the first half against Tennessee but gradually fought their way back into the game and eventually made their move in the final minutes. Alabama has now won eight of nine, with its only loss coming against Arkansas. The win against the Volunteers was a big result for the Tide because they did it without hitting their deep shots and without the help of Josh Primo. Primo suffered a knee injury against Mississippi State and was unable to go against Tennessee. The freshman star won’t play against LSU either, putting a ton of pressure on Herbert Jones and John Petty. Jones carried the Tide to victory against Tennessee, but Petty just could not get going, finishing with nine points for the second straight game. Alabama didn’t need Petty to score against a hopelessly outmatched Mississippi State, but the struggles almost cost them dearly against Tennessee. If Petty can’t get on speaking terms with Nashville soon, Bama’s in trouble.

Tired legs. Both teams are playing their third game in three days, and neither is a particularly deep squad. LSU’s guards didn’t sit for even a minute against Arkansas, and Petty and Jaden Shackleford are playing without help from one of their key contributors. Playing three games in three days is never an easy feat, and it’s compounded by the fact that both teams had to come from behind in the first half in their semifinals on Saturday. If there is an edge here, it might be in the coaches and their history. LSU coach Will Wade came from Virginia Commonwealth, which usually does enough to squeeze into the NCAA tournament without needing an automatic bid. As a result, his teams arrived in conference tournament finals knowing they were safely in the field, which might explain why he’s 0-2 in conference tournament finals. Nate Oats, on the other hand, lived the one-bid life at Buffalo before coming to Alabama. His teams had to win the conference tournament in order to win an NCAA bid — and they did precisely that; Oats is 3-0 all-time in conference tournament finals.

The Tigers can get their offense going the way they did in the second half against Arkansas. LSU easily could have folded when the Razorbacks went ahead for the second time, but they stayed the course and matched the Razorbacks shot for shot up until the frantic final minute, where they simply had to survive. If the Tigers can score early and often, they can keep pace with the Tide.

The Tide can speed LSU up beyond a pace it’s comfortable with. In the final three minutes of the Tigers’ semifinals, a desperate Arkansas threw full-court pressure at LSU, and the Bayou Bengals nearly crumbled under it, losing all but one point of what had been a 10-point cushion. The Tide were almost certainly watching, and with how they love to run, full-court pressure might be their way to force LSU to play too fast for its capabilities.

LSU has gotten a lot better in the past month, but Alabama appears to be on another level entirely when it’s at its best. The Tide also seems a terrible matchup for the Tigers, as LSU really didn’t seem to like pushing the tempo and playing under pressure in the final minutes of the win over Arkansas. LSU’s improved, but the gulf between the teams was so wide last month that I just can’t buy that the Tigers have shaved 13 points off of it. Nor can I overlook Oats winning three conference tournament finals while Wade lost two. Clearly, Oats knows what he’s doing on Day 3, and I’m going to ride with him here. Give me Bama to cover.