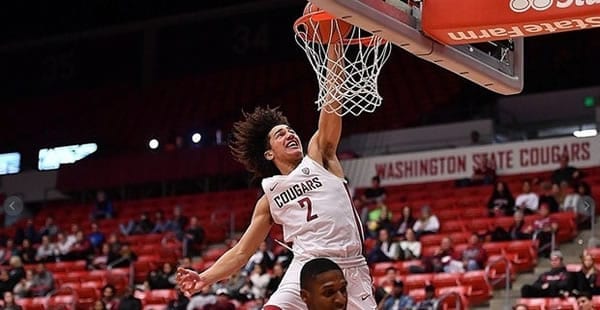 Finally, Stanford has stopped the bleeding. It seems like it’s been forever since the Cardinal were 15-3 and leading the Pac-12 after an encouraging three wins at home and a split on the Los Angeles trip that could have been a sweep if they’d gotten past USC in overtime. But the Cardinal have crashed since they started 4-0 in the Pac-12, having won just twice in nine games. Stanford has been in every game, losing all seven by nine points or less, but the Cardinal have only seen wins over Pac-12 leader Oregon and at Washington.

Beating the Huskies was critical for Stanford because a loss there might have completely fractured this team. Washington is a rather weak squad this season, and getting a win over the Huskies won’t do anything for the Cardinal’s faded NCAA hopes, but it will give them a chance to get off the canvas. To keep the momentum going, Stanford is either going to have to pick it up on the offensive side or double down on its defensive prowess. Given that coach Jerod Haase said verbatim after the win over Washington that Stanford “consider ourselves an elite defensive team” and the numbers show that the Cardinal defense ranks ninth in the nation, Stanford’s path seems to be rather apparent. Of course, getting another 27-point night from Oscar da Silva, like the one that came in the win over Oregon, certainly wouldn’t hurt.

The Tony Bennett days of slow, slower, slowest are long gone from Pullman. The Tony Bennett days of actually winning basketball games and qualifying for the NCAA tournament are also long gone from Pullman, as the two appearances from Bennett in 2007 and 2008 are the most recent trips to the NCAAs for Washington State. About the only thing that’s the same for the Cougars from the Bennett era is getting trucked by Stanford. Bennett was only 2-5 against the Cardinal in three years in Pullman, and Washington State has now lost seven straight to Stanford, a string that dates back to 2015 when previous coach Ernie Kent was in his first year.

For this year’s team, as CJ Elleby goes, so goes Washington State. When Elleby is scoring at a high clip, such as the 27 he put up against Arizona State or the 34 he got against Washington, the Cougars can play with anybody. When Elleby isn’t scoring, the results are not pretty. For him, the magic number is 40 percent, as 10 of Washington State’s 14 wins have come when he’s at least hit that number from the floor. When he doesn’t hit, his teammates usually haven’t been able to pick up the slack. In Pac-12 play, every game that hasn’t been against UCLA (both of which needed overtime) has seen the Cougars held to 66 points or less when Elleby doesn’t hit at least 40 percent of his shots. In other words, pretty much everything Washington State wants to do with the ball is predicated on Elleby being on the floor and effective.

Beasley Coliseum. Washington State is awful away from home, but the Cougars have made some good teams look silly when they come to Pullman. It doesn’t hurt that Pullman isn’t the easiest place in the world to get to from literally anywhere in the Pac-12. When teams come to the Palouse to play, they’re always either coming from their own campus or coming from Seattle, thanks to the Pac-12’s schedule of playing teams in pairs rather than having its teams travel independently of each other.

Through eight games at Beasley in league play, the Cougars are 5-3, and of the top five teams in the Pac-12, Arizona is the only one that came to Pullman and left with a victory. Oregon, Arizona State, and UCLA all left beaten while Colorado didn’t make the trip to Washington this year, enough for a ledger that shows Washington State will rise to the occasion against good teams. If Stanford wants to avoid a bad loss, it’s got to make sure it’s ready for the Beasley bump.

Don’t miss any of our game betting opinions by bookmarking our college basketball picks section!

Stanford will Cover if:

The Cardinal defense is locked in from the beginning. Washington State is one of the worst shooting teams in the nation at 39.8 percent, and that should play right into Stanford’s hands. The defense forced 18 turnovers last time these teams met, which was critical in Stanford building a 28-point halftime lead and putting the game on cruise control. If the Cardinal can either force turnovers or force bad shots, they’ll coast.

Washington State will Cover if:

The Cougars can make themselves big on the glass. Stanford is rather weak on the glass, as the Cardinal only average 33.7 boards per game. Washington State is a much better team on the glass and needs to make its bigs a big part of this game. Cutting down on turnovers would also help, but grabbing rebounds is step one.

This one worries me given that Washington State is playing on Senior Night (although three of the Cougars’ seniors don’t start and two of them barely play) and has beaten some good teams on its home floor. It’s also a concern that Stanford comes into this game as losers in seven of its past nine, and Washington State hasn’t been swept at home in a weekend series all year.

That said, I have to go with the Cardinal here. Lost in Stanford’s recent struggles is that the past six games have almost all been against quality competition. The exception was Utah, but the trip to Salt Lake City is never easy because of the elevation and because Utah isn’t all that close to anyone in the league but Colorado. Otherwise, the Cardinal have had to play four of the top five teams in the Pac-12 and lost to all but Oregon. Washington State, on the other hand, has struggled to score against lesser defenses and should really struggle against this kind of defense.

Given how often Stanford has kept other teams from hitting the total, eI think the under makes for an excellent play here. If you can, pair it with the Cardinal and eat the chalk. Where you betting today’s game? If your bookie isn’t allowing you to bet at -105 odds, YOU’RE OVERPAYING! Why pay more and wager at a lesser book when you can be betting at discounted odds and saving tons of money? Spend the 5 minutes it takes to sign up at 5Dimes and start betting smarter today! You help us stay free in doing so as well!