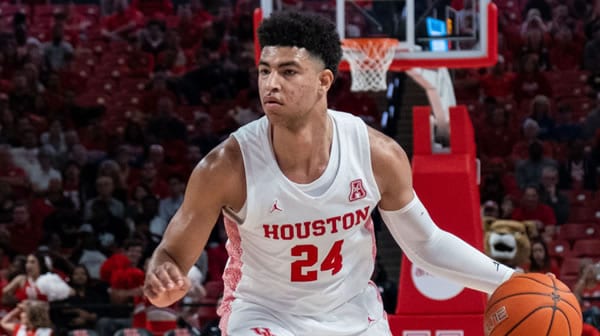 Once again, Jim Boeheim has found the secret sauce for success in March, as he’s guided Syracuse into the Sweet 16 for the third time in four tournaments despite being a double-digit all three times. The Orange got here in 2018 following the same path, as they took out both a No. 6 and a No. 3 seed before succumbing to the No. 2. However, in that game, Syracuse was up against a familiar foe in conference rival Duke, which had been to that level many times before.

Houston’s a No. 2 seed, but the Cougars are a relative newcomer to these heights. 2019 was the first time in 35 years that Houston had made it this far, and the Cougars haven’t gotten past this round since that year in 1984 when they were in the process of making three consecutive Final Fours. Unlike the days of Phi Slamma Jama, these Cougars win with great defense and play a slower tempo than most teams. Syracuse has been getting great play from Buddy Boeheim, but it’s the defense that has really made the difference for the Orange as of late. Which side’s defense comes through here?

The scary thing for Syracuse opponents is that Buddy Boeheim wasn’t even part of the Orange’s surge in the first half of their win over West Virginia. Had he been scoring in the first 20 minutes, Syracuse might have buried the Mountaineers as badly as they did San Diego State in the first round. But when the rest of the Orange faltered, the coach’s son was there to pick up the slack, scoring 22 points in the second half to hold off the Mountaineer comeback.

The Orange do have a significant weakness that will almost certainly come into play: they can’t rebound. West Virginia couldn’t shoot its way past the Syracuse 2-3 zone, but the Mountaineers nearly overcame Syracuse anyway because they pounded away at the glass and picked up 19 offensive rebounds. Houston showed no problems in outrebounding Rutgers in the second round, and if the Orange can’t keep the Cougars off the glass, they’re going to need another Herculean effort on the offensive end to keep the run going.

The big question for Houston is whether the Cougars can get their offense on track if Dejon Jarreau is limited again by injury. Jarreau shot the ball well against Rutgers, but the Cougars couldn’t get much of anything going in the low post, as Reggie Chaney and Justin Gorham sank just two shots in the win against the Scarlet Knights. This is a team built around defense, and its three main guards, as Quentin Grimes, Marcus Sasser, and Jarreau, provide the bulk of the attack.

But when you think Houston, you think defense, and for good reason. Only two teams — East Carolina and Memphis — even managed to break 70 points all season against the Cougars, and Rutgers’ strong guard play was no match for Houston’s tenacity on that end of the floor. The Cougars held the Scarlet Knights to 44 percent from the floor, which proved critical in helping the offense survive a rough night. Syracuse’s improving defense could present a lot of problems, which means defensive work will again be crucial if the Cougars are to advance.

The Orange can hit from the outside. Rutgers was able to shoot 43.8 percent from behind the arc against Houston, which helped the Scarlet Knights build a 10-point lead that very nearly held up. Syracuse has quality shooters at its disposal, and if the Orange can get Boeheim and others free, they can give themselves the edge they need against a fierce defense.

The Cougars can get easy baskets inside. Houston didn’t go inside much against Rutgers, but its advantage in the paint wasn’t as pronounced against the Scarlet Knights as it will be in this contest. The Cougars have to take the ball inside as often as possible and force Syracuse to beat them on the glass.

With only two teams getting to 70 all year on Houston, this number seems to be too high to me. Houston can put up points, and if this game was being played a month ago, I’d tell you to jump all over the over. But the Syracuse defense has gotten a lot better in recent weeks, and I can see them holding Houston in the 60s. I think this game gets into the low to mid-60s, but that won’t be enough to top this number.

Syracuse has now covered six in a row, while Houston is 3-3 ATS in the same stretch. Plus, Houston has a tough time putting away teams that are close to their own skill level. The Cougars have covered seven in a row when favored by more than ten, but when they’re favored by ten or less, they’ve gone 0-4 ATS. That’s because Houston’s style makes it difficult to get a big lead, but once the big lead comes, it’s equally difficult to get back in the game.

I think Syracuse has the ability to avoid getting knocked out of the game early in this one, and if Houston doesn’t knock you out early, you’ll probably stay close until you run out of time. I think Houston pulls out the win, but for this bet, I want Syracuse and the points. Did you know… that you can bet on games at -105 odds instead of -110? Imagine all the money you’d save over the course of one year! It’s at least hundreds, and possibly THOUSANDS! Stop overpaying for odds! Make the switch to BetAnySports TODAY! You’ll be so glad you did!