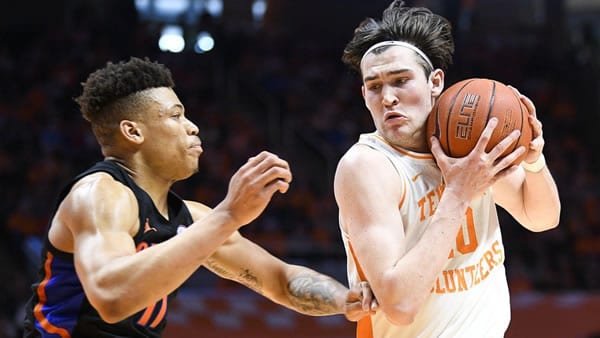 With Kentucky struggling to get on the same page, Tennessee has emerged as the premier pro-gram in the SEC, with the Volunteers hot on Alabama’s heels for first place in the league. The Crimson Tide are the only team to get the better of Tennessee all season, and the Volunteers have won three straight since that defeat to put themselves in a solid second place in the con-ference.

On the other hand, Florida is trying to figure out how to play without Keyontae Johnson and re-ally struggling to make the adjustment. The Gators have dropped three of their past four, with the lone exception being a win over Mississippi. Nobody expected the Gators to be anywhere close to the same team in terms of talent or emotions, but Florida has fallen pretty far in a hurry since it got into SEC play. With Tennessee coming to town and Rick Barnes sporting a 6-1 record against the Gators, can the Orange and Blue find a way to pull the upset and get the season back on track?

What Rick Barnes has built-in Knoxville has been nothing short of impressive. Tennessee has long been a sleeping giant, but Barnes has awoken the Volunteers and turned this program into a national power that’s built on depth and defense. Tennessee has seven players who they can count on to contribute 20 minutes a night, and all seven score 7.5 points per game or more.

That’s a major departure from most Power 6 schools, which usually have one or two guys they depend on more than anyone else. Tennessee is more of a team where the whole is a lot great-er than the sum of its parts, as Victor Bailey is the leading scorer with just 12.3 points per game. But the reason it works is that Tennessee’s defense has been far and away the best the SEC has to offer. Only Baylor has a more efficient defense nationwide, and at 57.2 points per game, it’s pretty rare to see teams break 65 points against the Volunteers. Only Alabama and Arkansas have done it, while Tennessee has held Colorado, Cincinnati, Missouri, and Texas A&M to 56 points or less.

After losses to Kentucky and Mississippi State, it’s become relatively clear that that didn’t work. It didn’t come close to working, as Florida has proven that its best strategy is actually to go to Castleton as often as possible. The Gators have played six games in the SEC this season, and they’re 3-0 when Castleton is the leading scorer and 0-3 when someone else is. The loss to Mis-sissippi State was the same story, as Castleton scored 16 points, but Florida got beat again be-cause the trio of Tre Mann, Noah Locke, and Tyree Appleby shot a combined 4-for-14 from be-hind the arc, leading the Gators to shoot just 41 percent for the game. Against Tennessee, Castleton will be the tallest man on the court, as only John Funkhouser gives the Volunteers any kind of bulk to match his size. Funkhouser’s defense will be critical in this game, and if Florida can exploit the height advantage, this could be closer than expected.

Identity. Tennessee knows who and what it wants to be, while Florida is very much a work in progress. The Gators match up well with the Volunteers on paper, but that only works if they get the ball to Castleton and let him take over the interior. If this game instead becomes another showcase for the Florida guards, it’s difficult to see how Florida can match up well enough with Tennessee. The Gators have to make their presence felt in the paint, or this game will be the Volunteers’ to lose.

The Volunteers can keep the ball on the perimeter. Despite shooting only 41 percent against Mississippi State, Florida still nearly pulled out a win, in large part because Appelby went 11-for-11 from the free-throw line. Tennessee isn’t as likely to give up as many cheap baskets as the Bulldogs did, which means the Volunteers should be able to focus on denying the ball in the paint.

Florida will Cover If:

The Gators get more out of their guards. Castleton is the man who the focus of the offense should revolve around, but since Florida likely will not do that, this is more about getting good shots and knocking them down. It didn’t happen against Kentucky, which held the Gators to 37.5 percent from the floor. Florida has to make sure it’s getting quality looks from players besides Castleton.

Florida’s struggling badly right now, and Tennessee is not a team you should be facing when you’re having a hard time getting good results. The Vols are a well-coached, intelligent squad that’s perfectly capable of forcing a team to play its game. That total looks a little too high for my tastes, and as for a prediction, I’ve got to go with Ten-nessee to pull out the cover here. I just can’t see this version of Florida matching up with Ten-nessee’s experiences, and I’m comfortable with laying 6.5.