Texas at Oklahoma Pick Against the Spread 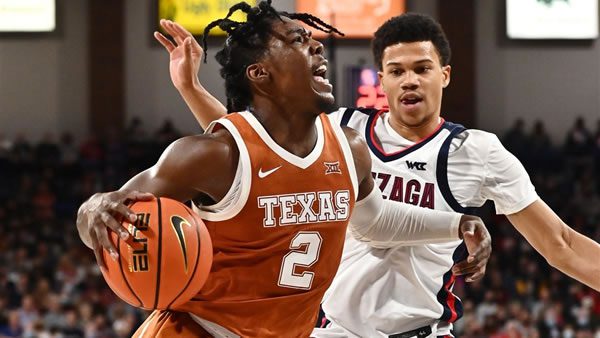 The Longhorns will try to keep their stellar season going when they visit Big 12 rival Oklahoma at the Lloyd Noble Center. We break down some key stats, and expert handicapper Rich Crew steps in with his recommended bet.

Most of the online shops opened this game at Texas -2.5, but early betting action has driven the line to as high as -4 at some of the sharper betting outlets.

Texas is coming off a 97-72 win over Texas A&M-Commerce. However, they did not cover the spread in the game as -30 point favorites. The combined 169 points finished above the 139.5 total line.

Oklahoma will be looking for another win, as they most recently defeated Florida by a score of 62-53. The Sooners also picked up an ATS victory as they were +3 point underdogs. The combined 115 points did not surpass the 134.5 total line.

Texas
Over their last five games, Texas has a straight-up record of 5-0 while going 2-3 vs. the spread. Over this stretch, the Longhorns’ offense is averaging 88.8 points per game while hitting 53.8% of their shots from the field. On the defensive end of the floor, they have allowed opponents to shoot 44.0% from the field while allowing 66.0 points per contest.

Oklahoma
In their previous five contests, Oklahoma is 3-2 straight-up and 2-3 vs. the spread. In these five games, they have a scoring average of 73.6 points per game on a shooting percentage of 53.2%. Defensively, they allow teams to hit 45.9% of their shots while giving up 66.0 points per game.

This season, the combined power rating of Texas’ opponents comes in at 71.2. On the other side, Oklahoma’s combined opponent power rating sits at 77.8

How Does Texas Fare On The Road?

Today’s game will be Texas’ first true road game of the season.

How Does Oklahoma Fare At Home?

In their ten games at home, Oklahoma has a 5-5 record vs. the spread while going 8-2 straight-up. On offense, the Sooners are shooting 50.4% on their home floor, leading to 68.5 points per game. Defensively, opponents are shooting 41.1% in these contests. The Oklahoma defense is allowing 59.4 points per game at home.

For the season, Texas is averaging 68.3 points per game (295th) while posting an overall field goal percentage of 44.2%. In today’s game, they will be matched up against an Oklahoma defense that has allowed an average of 60.7 points per contest. This year, opponents have hit 42.6% of their shots vs. Oklahoma. On the other side, the Oklahoma Sooners are coming into the game averaging 68.5 points per game on a shooting percentage of 47.5%. The Sooners will be facing a defensive unit allowing an average of 62.2 points per contest. So far, teams have hit 40.1% of their shots vs. the Longhorns.

From beyond the arc, Texas has a shooting percentage of 32.3% while ranking 504th in attempts per game. The Longhorns will be facing an Oklahoma defense that has a 3-point field goal shooting percentage allowed of 26.9%. Oklahoma enters the game having hit 33.9% of their looks from deep while averaging 7.36 made 3’s per game. On the other end, Texas has allowed opponents to hit 30.8% of their shots from beyond the arc.

No doubt that the OU could come up with a big one here., but I believe that the scoring prowess of Texas will be too much for them. The Longhorns average 83.8 points per game, and the Sooners have lost both games that their opponent scored 70 or greater points and arguably hasn’t faced a team of this level offensively. Take Texas -3.5