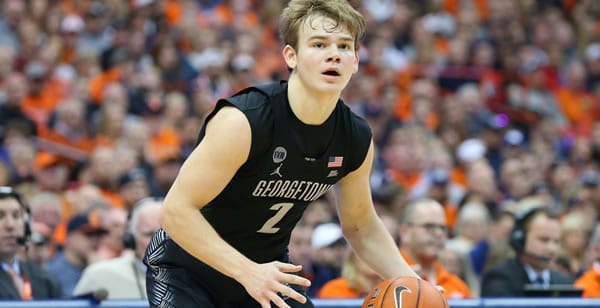 Shaka Smart’s reinvention as a coach has to happen this season, or it isn’t going to happen in Austin. The early results have things leaning toward a successful change from the HAVOC days. However, the Longhorns still focus just as much on defense as Smart’s Virginia Commonwealth squads; they just get there in a completely different way. This Texas squad isn’t about speeding up opponents and forcing them into turnovers with breakneck speed; it’s instead a defense that denies passing lanes and limits good looks at the basket.

It turns out, that’s an excellent combination to pair with a team that hits its 3-pointers. Texas has gotten great shooting from Matt Coleman and Andrew Jones so far, and while the rest of the Longhorns haven’t been hitting outside of third scorer Gerald Liddell, they’ve done enough to get the job done each night. This is a team that’s already been to Purdue and won a true road game, so they aren’t likely to get scared by the lights of New York.

The pressure isn’t yet on Patrick Ewing, who had a rather large rebuilding job in Washington and has the Hoyas on an upward trajectory after making it to the NIT last season. But that upward trajectory has to continue this season, or Georgetown fans will start to ask questions. That means that the Hoyas have to take advantage of a Big East that’s down and get back to the NCAA tournament.

Beating teams like Texas would go a long way toward making that happen. To get a win here, Georgetown is going to have to make itself big down low by getting Omar Yurtseven established early in the contest. The Hoyas have generally done well this season, but they struggled badly against Penn State, a Big Ten squad that had the ability to stand up the Hoyas and keep Yurtseven from pushing them around. Getting more from the likes of Mac McClung would go a long way toward keeping defenses from focusing on Yurtseven.

Pacing. If you could wake a college basketball fan from the 1980s and tell them that Texas is methodical and defined while Georgetown tries to out-athlete you all night, you’d get a lot of shocked looks. But that’s what these teams have become, setting up this intriguing matchup of contrasting styles.

For the Longhorns, it’s a complete 180 to what they saw in their win over Purdue. Texas wasn’t frustrated by the Boilermakers’ methodical approach, but the Longhorns will need the exact opposite mindset to handle the Hoyas’ much faster tempo. However, if Georgetown tries to push it too quickly against a tough Texas defense, easy layups could be the story of the night.

The Longhorns are able to continue what’s gotten them off to a perfect start. Texas has looked very good in the opening weeks of the season, and the Longhorns have made that happen by playing the way Smart wants them to play. They’ve faced more intimidating atmospheres than this one this season, so this is just a case of playing their kind of basketball on a bigger stage.

Georgetown will Cover if:

The Hoyas can frustrate the Longhorns’ shooters from the arc. Texas’ tough defense-first approach has a weakness: if the Longhorns aren’t hitting from the outside, it doesn’t matter what they’re doing on defense, because they won’t be scoring enough to make it matter. If Georgetown can either speed up Texas enough to force the Longhorns into mistakes or force Texas to rush its offense, this game will end up going the Hoyas’ way.

Based on what I’ve seen so far this season, Georgetown has the look of an NIT squad again. The Hoyas look like they’re continuing to move in the right direction and will surprise a few teams over the course of the season. Texas, on the other hand, appears to finally be ready to return to where it now expects to be. These Longhorns play the way Smart wants to coach this team, and they’ve already shown that they can get results when they play their style of basketball and get good looks at the basket.

I don’t think Georgetown is good enough on defense to deny the Longhorns their shot at Duke, which will go to the winner as long as the Blue Devils don’t screw up against California in the second game at the Garden. Give me Texas to get the win, the cover, and the chance to face the No. 1 team in the nation.