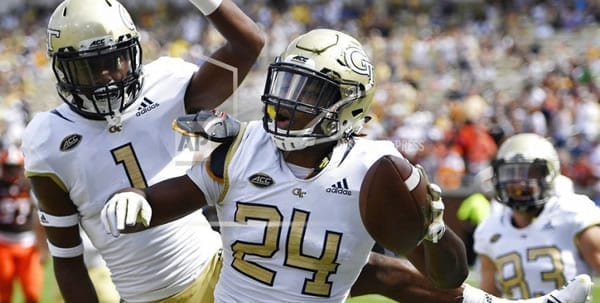 It’d be hard to blame ESPN if it decided to preempt this one for reruns of the World Series of Poker because this is about as bad as it gets for college football. N.C. State has completely fallen apart since losing at Wake Forest back in Week 3, as it has managed to lose five of its six ACC contests by 14 points or more, including three by at least three touchdowns. Since a 2-0 start, the Wolfpack’s only wins have come over Ball State and Syracuse, and with how N.C. State has played over the past month; it’s a reasonable guess as to whether it could beat either of those squads now.

Georgia Tech, on the other hand, seemed to be playing with enthusiasm and hope as it entered November, as the Yellow Jackets managed to beat Miami on the road before giving a credible effort at home against Pittsburgh and at Virginia. However, the Yellow Jackets followed that up by getting swatted 45-0 at home by a middling Virginia Tech squad. At 2-8, Tech is going nowhere when this season ends, while State could still salvage a .500 season if it can win this game and upset rival North Carolina in the season finale. In short, it’s a tall order.

How the Public is Betting the N.C. State/Georgia Tech Game

Both the total and the spread have ticked up half a point since the opening lines came out, with the line starting at Georgia Tech -1 and the total at 48.5 before reaching their current levels.

N.C. State:
Cornerback Nick McCloud is questionable with a knee injury, while linebacker Payton Wilson is questionable with a collarbone injury. Corners Chris Ingram, Teshaun Smith, and Taiyon Palmer are all out for the season, with Ingram and Palmer suffering from knee issues and Smith out with a shoulder injury.

With the season a lost cause, Dave Doeren has decided to throw freshman Devin Leary into the mix and see if taking his lumps now leads to a better offensive situation in 2020. So far, Leary has been average as the Wolfpack signal-caller. He’s certainly not afraid to throw it, as he’s exceeded 40 passes in two of his four starts this season and has six touchdowns against three interceptions.

If he had a running game at his disposal, it would be a huge help. Unfortunately for the Wolfpack, Zonovan Knight and Jordan Houston have not been the answer, combining to rush for 964 yards and six touchdowns on the season. With the running game hardly a threat, State has had to ask a lot of Leary, and for the most part, he’s provided decent play. However, the lack of a ground threat means that opposing defenses can line up extra defensive backs, which has kept the State passing game from being the true weapon it needs to be.

At least Geoff Collins has an excuse for his offense being as poor as it has been this year: he’s working with players who were recruited for a completely different kind of offense. This was always going to be an awful year for Georgia Tech because the Yellow Jackets were moving on from Paul Johnson, the most high-profile coach, to run the triple option. Collins doesn’t run the triple option, meaning that the players he had were recruited either to block for the option or to show their skills in that system, but his system is a lot closer to the offenses that have become common in this day and age of the sport.

James Graham has done a decent job stepping up as a freshman quarterback, but what makes the Yellow Jackets run is running back Jordan Mason. He didn’t get started at all against Virginia Tech, which led to the 45-0 rout, but when he does get going, he makes a big difference for the Jackets. Georgia Tech has to get him going to make sure that it can control the clock and put together some drives. With State having four corners injured, now would be a great time to attack the secondary, but Georgia Tech doesn’t have the personnel to pass often yet, so expect the Jackets to stick with the ground game here.

Something has to give here between these squads. Georgia Tech has not covered a game at home this season, while State hasn’t covered a game on the road. In fact, the Jackets haven’t covered in any of their past seven home games, while State has failed to cover in six straight on the road. When they play each other, though, the Jackets have held the edge, having won nine of the past 14 against the spread over the Wolfpack. The safest bet on the board might be the under given these teams’ offensive woes, as the Wolfpack have gone under in 19 of 27 league games, while Tech is 5-1 with the under in its past six home games.

The football will be ugly. The weather won’t be, as temperatures will push 67 degrees in this game.

This game is going to be rough to watch, but from their recent scores, Georgia Tech believes it still has something to play for, while N.C. State seems just to want to get the season over with. The Wolfpack have looked listless in their past four contests, and I don’t see that changing after they couldn’t muster the motivation to try to set themselves up for bowl eligibility. I don’t think State wants to keep this season going, and I believe Tech believes it’s on the right track for 2020. I want the team that seems to be making progress, so give me the Yellow Jackets here. Did you know that you can bet on games at discount pricing? Ditch your overpriced bookie TODAY and start laying only -105 odds at BetAnySports! Making the switch to reduced juice wagering is the smart way to bet and will save you HUGE $$$$ over the long run!