Toledo at Buffalo: Breaking Down the Odds and Giving a Free Total Pick 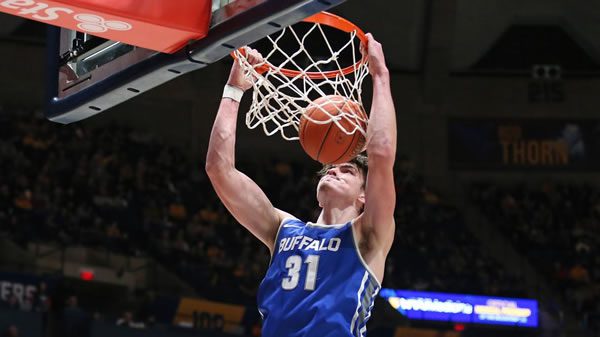 The Toledo Rockets travel to Buffalo to take on the Buffalo Bulls in Friday night college basketball action. The Rockets are currently listed as a -4.5 road favorite, with the total line offered up at 168 points. The tip-off for the game at the Alumni Arena is scheduled for 8:30 PM ET and can be watched on CBSS.

The Blades opened as low as a -3.5 favorite before being bet up to Toledo -4.5, where it is held. The total opened at 170 and has seen a downward movement to as low as 167.5 at some of the betting shops.

Toledo picked up a victory over Ohio by a score of 90-75. Heading into the game, the Rockets were favored to win, with a point spread of -9. The combined 165 points finished above the 160 total line.

Buffalo picked up a victory over Bowling Green by a score of 100-71. Heading into the game, the Bulls were favored to win, with a point spread of -6.5. The combined 171 points finished above the 161.5 total line.

Toledo
Over their last five games, Toledo has a straight-up record of 3-2 while going 3-2 vs. the spread. Over this stretch, the Rockets’ offense averages 84.4 points per game while hitting 49.3% of their shots from the field. On the defensive end of the floor, they have allowed opponents to shoot 42.5% from the field while allowing 76.2 points per contest.

Buffalo
In their previous five contests, Buffalo is 3-2 straight-up and 3-2 vs. the spread. In these five games, they have a scoring average of 82.6 points per game on a shooting percentage of 45.3%. Defensively, they allow teams to hit 41.5% of their shots while giving up 76.6 points per game.

This season, the combined power rating of Toledo’s opponents comes in at 71.5. On the other side, Buffalo’s combined opponent power rating is 72.3.

How Does Toledo Fare On The Road?

For the season, the Rockets have played nine road games and have a record of 4-5. In these contests, Toledo is 4-5 vs. the spread. Offensively, they have averaged 77.8 points per game on a shooting percentage of 45.7%. On defense, the Rockets allow 78.6 points per contest when playing away from home. So far, opposing teams have a field goal percentage of 46.1% in these games.

How Does Buffalo Fare At Home?

In their 11 games at home, Buffalo has a 5-4 record vs. the spread while going 8-3 straight-up. On offense, the Bulls are shooting 46.5% on their home floor, leading to 83.3 points per game. Defensively, opponents are shooting 41.0% in these contests. The Buffalo defense is allowing 71.5 points per game at home.

For the season, Toledo is averaging 80.7 points per game (11th) while posting an overall field goal percentage of 48.4%. In today’s game, they will be matched up against a Buffalo defense that has allowed an average of 77.1 points per contest. This year, opponents have hit 43.9% of their shots vs. Buffalo. On the other side, the Buffalo Bulls are coming into the game averaging 79.9 points per game on a shooting percentage of 45.5%. The Bulls will be facing a defensive unit allowing an average of 78.6 points per contest. So far, teams have hit 42.1% of their shots vs. the Rockets.

From beyond the arc, Toledo has a shooting percentage of 36.0% while ranking 516th in attempts per game. The Rockets will be facing a Buffalo defense that has a 3-point field goal shooting percentage allowed of 33.7%. Buffalo enters the game having hit 34.2% of their looks from deep while averaging 8.5 made 3’s per game. On the other end, Toledo has allowed opponents to hit 34.8% of their shots from beyond the arc.

Toledo has been playing better defense as of late. They were blasted by the coach after their 90-83 loss to Ball State, whom they allowed to shoot 52.5%. The Rockets have turned it around since, holding three of the last four opponents to below 40%. Only Ohio U surpassed 40% (43.3 FG %), which came in a game in which Toledo led 52-31 at the break and let the defense slip in the second half. Buffalo hasn’t played all that much at home, but they have held the opposition to 40.2% shooting. Take the Under 168. Bet your NCAA basketball predictions for FREE this week by scoring a 100% real cash bonus on your first deposit of $100 to $500 when you use bonus code PREDICTEM at Betnow Sportsbook!