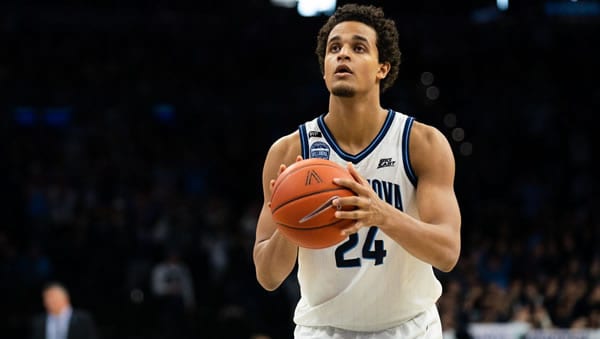 It’s talent vs. experience in this Big East matchup, as Villanova puts its status as the league leaders on the line against a Creighton squad that’s been able to play for more often than the Wildcats, who have been hampered all year by issues with both themselves and opponents dealing with COVID. The Wildcats have been here before, of course, but they’ve missed out on five games compared to their opponents, who are pushing for a Big East title and see this as a chance to get the signature win that would give them a top-four seed.

Actually, getting any kind of win would be a major thrill for the Bluejays against the Wildcats, who have dominated this series ever since Creighton threw caution and geography to the wind and joined the Big East. Creighton managed to sweep Villanova in its first year in the league, but since then, the Bluejays are just 2-11 against the league’s premier program. Can Creighton figure out how to solve its nemesis?

When Villanova is focused, it’s as good as any team in the nation, which Marquette learned the hard way as the roof caved in on the Golden Eagles during a Wildcat rout. The first half looked like another game against a lesser side in which Villanova would emerge with a slender victory that clearly wasn’t their best effort, but the Wildcats hit the gas and hit seemingly everything from the floor, shooting 63 percent for the game.

But even in that 32-point rout of the Golden Eagles, Villanova showed its Achilles’ heel. It does not have that strong inside presence needed to dominate a game inside. It can be pushed around inside the paint, and if a team can actually keep the Wildcats’ shooters from taking over the game, the game is there to be won on the glass. Villanova only tied the rebounding num-bers for Marquette despite shooting 63 percent, meaning the majority of the available re-bounds came off missed shots from the Golden Eagles. When you can’t outrebound a team that’s shooting that low of a percentage from the floor, it says you’ve got a real issue on the glass. Jeremiah Robinson-Earl can’t do it all alone on the boards, and unless he plans to hit five 3-pointers again, he’ll have to get the job done on the glass.

There’s the sweat, and then there’s betting on Creighton. The Bluejays have almost made play-ing a close game into an art form, as 11 of their 15 league games and seven of their past eight have been decided by eight points or less. Their big problem has been inconsistency, and no se-ries demonstrated that better than when they played Georgetown twice in a span of three games. In the opener, Georgetown hung 86 points on the Bluejays, scoring 44 and 42 in each half. In the second game, the Hoyas managed a total of 48 points against the Bluejays, as Creighton made the adjustments it needed.

What makes Creighton dangerous is a three-legged stool: the Bluejays play solid defense, shoot the ball fairly well, and don’t beat themselves by making mistakes. The last one has been a bit suspect as of late, as they managed to win over the Hoyas despite committing 17 turnovers. That won’t work against Villanova, which means the Bluejays have to commit to making the ex-tra pass and hitting open shots when they come.

Home without pressure. Virtually no pressure is on the Bluejays in this situation, be-cause few expect Creighton to be able to compete at the highest level in the nation, given their struggles against the Wildcats as Big East members. But Creighton is a dangerous team when it’s making shots, and the Bluejays have more than enough talent to take control of both this game and the Big East race. If Creighton is going to make a move to the top of the standings, this is going to be where it happens.

The Wildcats’ guards can take over the game. In particular, Collin Gilles-pie has proven incredibly valuable to the Villanova attack, as he’s scored in double figures in each of the past four Wildcat wins but ended up with just four points in a loss to St John’s. If Creighton doesn’t have an answer for them, the Wildcats can win this game on the perimeter.

Creighton’s been playing pretty strong basketball, but this line is too low for me to trust them on the backdoor cover, given what Villanova’s been doing in this series. The Wildcats are simply the top team in this league, and I think they’ve got too much for the likes of Damien Jefferson and Marcus Zegarowski. This line is manageable, and I think the Wildcats will cover the small number here. Bet this game live-in-progress at the best live wagering platform on the planet —> Bovada Sportsbook! They’ll give you a 50% bonus too!