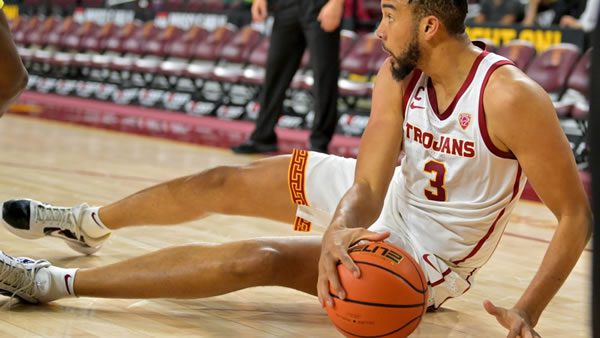 Washington State’s run at the NCAA tournament is over, and now there’s a real question as to whether the Cougars are even going to compete in the NIT. The Cougars have now dropped four in a row and have found themselves exposed as a team that was beating lesser sides but really isn’t ready to take on the stronger teams in the Pac-12.

USC certainly qualifies, as the Trojans are trying to keep themselves from getting shipped too far from home for the NCAA tournament. With six quality teams among the top 25 this year west of Texas, the Trojans actually have some competition for the two subregionals held in the Mountain and Pacific time zones, and USC is going to need a lot to go its way to play its first two NCAA tournament games in either San Diego or Portland. The Trojans don’t have a ton of quality wins on the profile to this point, and if USC wants to avoid a long flight for the first two rounds, the Trojans pretty much have to be thinking run the table at this point.

It’s plain and simple: Washington State cannot shoot. The Cougars are 325th in the nation in field goal percentage, and they haven’t topped 60 points in any of their past four games. Part of that could be explained by Oregon and UCLA being solid defensive squads, but Arizona State’s not known for its defense and still managed to hold the Cougars to just 55 points.
Against UCLA, pretty much everything that could go wrong for the Cougars did. Not only did Michael Flowers shoot 1-for-8 and the team shoot 28 percent as a whole, but Washington State got blasted on the glass, losing the rebound battle 38-22 to UCLA. The Cougars are usually a decent rebounding team, and they pretty much have to combine defense, rebounding, and drawn-out possessions in order to get victories. If any of those three are missing, the entire stool collapses.

When Drew Peterson is scoring, USC is tough to stop. UCLA found that out the hard way when Peterson had his best game of the season against the Bruins, going for 27 points and 12 rebounds to hand the Trojans a win they had to have. More impressive was the fact that the Trojans did that without Isaiah Mobley, who missed that game with an injury before returning against Washington.

The Trojan offense clicked on all cylinders with him back on the floor, and if he can get back up to 100%, this team can make another deep run in the NCAA tournament. For the time being, the Trojans would settle for running through their final five Pac-12 games, as their last three give them an excellent opportunity to boost the profile and land a coveted top-four seed.

USC will Cover If: The Trojans can dominate the glass. USC has the best rebounders on the floor, and Washington State just got decked by UCLA. If the Trojans keep hammering away on the glass, the Cougars are likely to lose hope and become easy prey for the Trojans’ interior game.

Washington State’s number for this game is 63. Washington State hasn’t topped 60 in any of its past four games and seems to be cooked at this point. Taking the Cougars’ team total under makes a world of sense.

USC has a lot more to play for than Washington State and seems to be playing better basketball. I’m worried about USC’s play at home and its annoying tendency to allow backdoor covers, but the Trojans have won three straight at the Galen Center, and this number seems manageable.
Washington State just doesn’t look like it still believes it can get anything out of this season. The Cougars could still land an NIT bid, but I think they’ve hit their wall. Give me USC. Bet your NCAA basketball predictions for FREE this week by taking advantage of a 100% real cash bonus on your first deposit of $100 to $1000 at Betnow Sportsbook! It’s the best sportsbook bonus on the web!