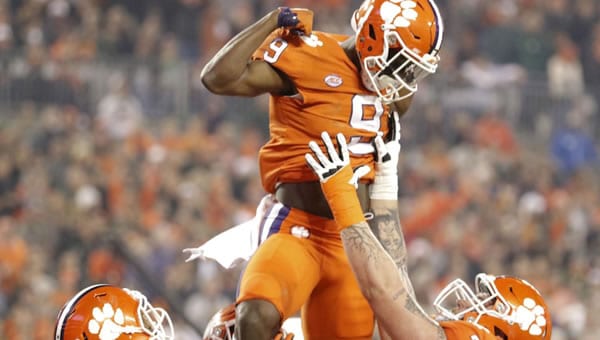 The Clemson Tigers solidified their No. 1 ranking last week with a 42-17 blowout victory over no. 7 Miami. With the victory, Clemson has now amassed 33 straight wins in the regular season going back to their last in-season defeat in 2017 against Syracuse. On Saturday, the Tigers will go on the road as they meet the Georgia Tech Yellow Jackets at Bobby Dodd Stadium. Historically, Georgia Tech has been a nuisance to Clemson in a rivalry that the Yellow Jackets have bested the Tigers until just the last few years. Now the question is not can Georgia Tech beat the Tigers, but can they stay within the 27 point spread against the best team in the nation? Fresh off a rather impressive 46-27 win over Louisville, this may be the perfect time to fade the Yellow Jackets in their toughest match-up of the season.

Last week, Georgia Tech had their best offensive performance, which featured 450 total yards on offense and 46 points on the scoreboard. While this sounds encouraging, please don’t assume this Georgia Tech offense is necessarily a strong unit. Louisville coughed the ball up several times, could not stop the run, and allowed busted plays in the passing game, which made things extremely easy for the Yellow Jackets. Those specific opportunities will likely not be available this weekend when Georgia Tech lines up against one of the better college football defenses. Clemson ranks in the top 15 in total defense allowing just 303 yards per game and in the top 10 in scoring defense, allowing just 13.25 points per game.

Furthermore, Clemson’s defensive strength is a product of their defensive line, which aligns perfectly against this weak Georgia Tech offensive front. The Yellow Jackets remain a run-first offense under Head Coach Geoff Collins by necessity over choice. Georgia Tech quarterback Jeff Sims is barely hovering about the 50% mark in completion percentage and has shown bad-decision making with eight interceptions compared to just five touchdowns. Even in last week’s 46 point outing against Louisville, Sims was only 11 of 21 passing for 249 yards and two touchdowns. I mentioned earlier that Clemson’s defensive strength is along the defensive line, where they are allowing only 2.25 yards per rushing attempt. When Clemson shuts down the run this week, it will put the pressure on Sims in a feast or famine type of scenario.

Get all of the teams spread plays: Weekly College Football Picks!

Earlier this season, I proclaimed that Clemson would have the best offense in college football this year. Quarterback Trevor Lawrence appears to have shaken off a few questionable moments from his sophomore season and legitimately looks like the consensus #1 pick in next year’s NFL Draft. To date, Lawrence is completing 72.4% passing, for 1,140 yards, with ten touchdowns and 0 picks on the season. Lawrence has also added four touchdowns on the ground to pad those impressive stats. Despite Lawrence living up to the hype, Clemson’s offense is engulfed with superior talent. Receivers Amari Rodgers and Frank Ladson are showing great potential. More importantly, I still believe running back Travis Etienne is the most underrated player in America. Despite constantly getting pulled late in games when the score is out of hand, Etienne has 392 yards and four rushing touchdowns through 4 games. Etienne also ranks 2nd on the team in receiving yards. Etienne’s speed and playmaking ability is a disastrous match-up for Georgia Tech this week, and I expect the senior tailback to have his best game of the season against this Yellow Jackets defense!

Jay’s Pick to Cover the Point Spread: Clemson has not exactly been a great betting team this year going just 1-3 ATS through the first four games. However, I really like this match-up, and I think Clemson’s defense will help seal the cover. Take Clemson to get the money! Note: 5Dimes (home of reduced juice wagering) no longer offers betting to North Americans. Did you know that there’s another SOLID book that offers -105 odds on sides and totals? —> BetAnySports We’ve advertised them for over 10 years with zero complaints!