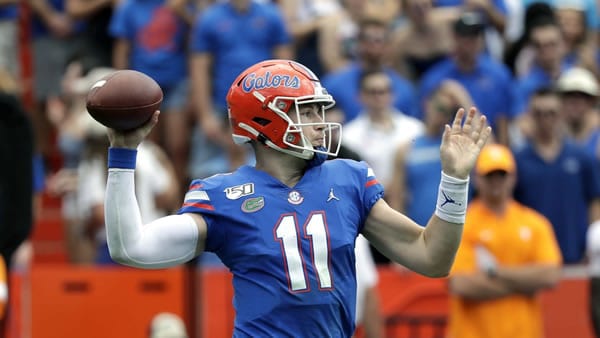 The Florida Gators come in to take on the Ole Miss Rebels on Saturday in SEC action. This will be the first game of the season for both teams, with the world of college football thrown for a loop this year. But all that entails applies to both teams, and though the normal SEC environment won’t be there and things are different from a lot of angles, football is football. Florida looks to further their position to become a true factor in the SEC and enters this season ranked fifth in the AP. Ole Miss, meanwhile, is coming off a disheartening 4-8 season, missing out on bowl-season for the fourth straight year in what has been a precipitous fall for a once-respected program. Who can cover the number this week in this opener?

A Lay of the Land

The Gators have seen a surge under head coach Dan Mullen with a 21-5 mark in two seasons, punctuated by an 11-2 record in 2019, including a Sugar Bowl win. A lot is expected this season and for good reason. Starting quarterback Kyle Trask is back. Last season, he was great in relief of starter Feleipe Franks. The offense should be very good. Their defense is even better, which is a scary proposition for Ole Miss, as is how well Florida played on the road in conference games last season.

The Rebels are mired in a big old funk, and there isn’t appreciable evidence that things will change much in 2020. QB John Rhys Plumlee is the presumed starter, though Matt Coral could also see playing time, as the pair split time last season. Neither was really good at connecting with receivers, with a languid aerial attack. They can run the ball a little, and Plumlee is actually one of the better running quarterbacks in the SEC, for whatever that’s worth, as this Ole Miss offense is not really up-to-snuff in this conference.

Bounce-Back Season for the Rebels?

Last season, this Ole Miss team had minimal experience. A lot of guys return and should presumably be better. Or at least that’s how the script is supposed to play out. They were better at home, and even without the crowd, it’s never a particularly easy place to play. Three young receivers who really started coming around over the course of last season in Braylon Sanders, Elijah Moore, and Dontario Drummond, could give this offense a boost. The front, which was oftentimes picked apart, should also be better with added maturity.

The problem for Ole Miss is that even if they have taken a step forward as a program, it might not be terribly evident in this match-up. Last season, we saw a Florida defense only really allow anything resembling liberal scoring to the best teams in the conference and, therefore, the nation. They were very stiff against middling offenses, and there’s not going to be a lot of let-up this season. And while the notion of blossoming youth also applies to the Ole Miss defense, they will be up against many weapons in this game. Sure, the Rebels have playmakers like returning Lakia Henry and Donta Evans. But for a defense that could ill-afford to lose pieces, not having playmaking linebacker Sam Williams in there really hurts, as he sits out a suspension. Still, they should come around. This is a pretty tough entrance exam, however, even at home.

Can Ole Miss Stop Florida and Keep it Close?

Perhaps the week one spot and this being at home is a good time to catch Florida a little out-of-sync. Otherwise, Mississippi is going to have to be a lot better than they were last season against the better SEC offenses. Trask was really a revelation for the Gators last season, showing an aerial flair they had been missing. The Gators had to see some pieces depart, namely Lamical Perine and Van Jefferson, but a lot remains. Trask works great with one of the best tight ends in the conference in Kyle Pitts, with a lot of good role receivers still in tow. We’ll see how Dameon Pierce does taking over the lion’s share of the work in the backfield.

The Gators’ strength is their balance. On offense, they’re not going to blow teams away like the other heavy-hitters in the SEC like Alabama and LSU. But it’s a balanced approach, offering a lot of depth and variety. And with the defense shining, it makes it so the offense needn’t be great—they just need to be good, take care of the ball, and give the “D” a chance to control the game. With hitters like Ventrell Miller, Zachary Carter, and Donovan Stiner, they can make many plays on top of being really stout. They registered three shutouts last season, and only LSU scored more than 28 against this group. Most opposing offenses were spinning their wheels against this bunch, which begs the question, “What can an Ole Miss offense that rarely hit any high notes last season do in this spot?”

I can wholly understand the sentiment behind an Ole Miss pick. It’s not a comfortable feeling to lay a big number on a road-team in their own conference. It makes it harder when that team is not necessarily an offensive juggernaut, and it’s the first game of the season, to boot. I just think that the two respective trajectories of each program warrant such a drastic stance. Other than wishful thinking, it’s hard to identify where the Rebels match up well with the Gators, and for a Florida defense that has a lot of expectations this season, I see this as being a spot where they can potentially dominate. I’m going with the Gators.

Loot’s Pick to Cover the Point Spread: I’m betting on the Florida Gators minus 14.5 points. Bet your Week 4 college football picks for free by scoring a 100% real cash bonus on your first deposit of $100 to $300 at MyBookie Sportsbook!