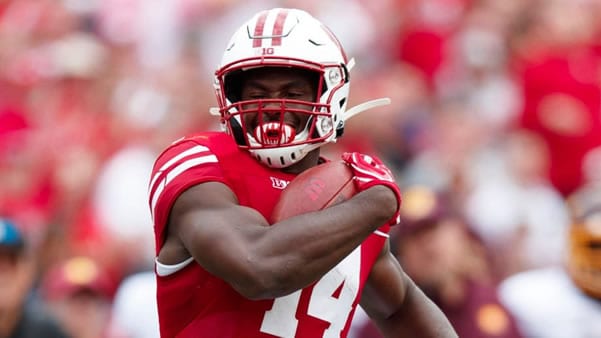 The Big Ten might be fashionably late to the college football party this year, but things are set to kick off this Friday night when Illinois heads to Mad-Town to take on Wisconsin. The Illini crafted one of the biggest upsets last season when they took down the Badgers in Champaign by a 24-23 score off a late field goal. Illinois was a 30-point underdog in that contest, and they enter this game as 23.5 point dogs. Wisconsin is still a favorite to win the Big Ten West, but they lost Jonathan Taylor to the NFL and recently lost their starting quarterback Jack Coan to a foot injury. Under normal circumstances, Illinois would not be looking forward to a primetime contest at Camp Randall as night games have not gone well for opponents there, but no fans will be in attendance come Friday, so the Illini will not have to deal with a raucous crowd.

Lovie Smith heads into his fifth season as head coach with the team fresh off its first bowl game appearance since 2014. The Illini are just 15-34 overall under Smith and could be in a little trouble with the conference-only schedule as they are only 8-28 against Big Ten opponents under Smith. Their 4-5 conference record in 2019 was their best mark in the last four years, and you have to go back to 2007 to find the last time Illinois was above .500 in the conference. They did perform better against the spread last season, going 8-4 ATS while posting a 6-6 straight up record in the regular season.

Illinois does return some significant experience, but they did lose a few playmakers that could be tough to replace. Running backs Reggie Corbin and Dre Brown are gone, and that duo accounted for 1,179 yards and 11 scores last season. WR Ricky Smalling didn’t put up flashy numbers but was a leader for that unit. The defense will be without LB Dele Harding, who led the team with 153 tackles last season and was named to the Big Ten First Team. DL Oluwole Betiku racked up nine sacks but will not return this season. Illinois will have the services of senior QB Brandon Peters and WR Josh Imatorbhebhe. Peters threw for 17 touchdowns last season, and a team-high nine went to Imatorbhebhe. TE Daniel Barker was second on the team in touchdown receptions and gives Peters a quality target over the middle. The Illini offensive line returns four starters, and this unit is among the highest graded in the Power Five. The defensive line has some question marks, but the back-seven appears set with five starters back across the LB and DB groups.

BEST BONUS FOR SMALL BETTORS: DEPOSIT $25 AND GET A FREE $50 BET AT INTERTOPS SPORTSBOOK. MUST USE BONUS CODE: ROOKIE200

Opponents will be happy to no longer see Jonathan Taylor toting the rock for Wisconsin, but the Badgers are left looking for a way to replace the man responsible for 37% of their total offensive yards last season. Nakia Watson and Garrett Groshek will share running back duties, with Watson the better pure runner and Groshek a bit better in the passing game. Further complicating the transition will be the loss of three starting offensive linemen. The good news for the Badgers there is that prospective new starters have all seen time as backups. There was to be a spring practice battle for the starting QB spot, but there was no spring practice, and Jack Coan entered the fall season with a small edge on redshirt freshman Graham Mertz. Coan injured his foot two weeks ago and required season-ending surgery, pushing the highly-rated Mertz into action. Mertz did appear in two games last season, completing 9-of-10 passes for 73 yards in mop-up duty. This offense averaged 34.6 points per game with Coan and Taylor last season and will have to come somewhat close to that if they want to head back to the conference championship game.

Other Losses and Returning Starters

Quintez Cephus led the Badgers in receptions, yards, and touchdowns last season but is gone via the draft, leaving Danny Davis and Kendric Pryor as the top options at receiver. Both are seniors and have made big plays in the offense, but neither has shown the consistency to be the #1. Jack Dunn is another senior that projects as a good slot option and return man. Jake Ferguson may prove to be the key playmaker in the passing game as the 6’5″ tight end was second on the team in receptions and was the only Badger tight end to record a catch last season. The 8th-ranked defense from 2019 will have to replace the 24 sacks produced by Zack Baun and Chris Orr. Replacing that production may prove impossible, but the Wisconsin defensive line is intact from last season, as is the secondary.

Considering we are going into this game a bit blind in terms of how these teams have prepped for the season, we have to lean on the most significant trends from last season. Most of Illinois’ metrics were on the negative side as they ranked 120th in total yards per game and 78th in scoring. That doesn’t look good on paper against a Wisconsin defense that was 10th in points allowed and 2nd in the country on third-down defense, allowing a paltry 27% conversion rate. Even without Taylor, Wisconsin should see success in the run game as Illinois ranked 110th in rush defense last season. The Badgers led the nation in time of possession in 2019 and should see an edge in that department come Friday as Illinois was 127th in that category. I mentioned the Illinois OL was scheduled to be among the best in the conference and perhaps the country, but they do need to take a step up from allowing 35 sacks last season. That number was good for 115th in the NCAA, while Wisconsin allowed 19 sacks, good for 35th.

Take the Illini and the Points

Wisconsin is 9-1 straight up against Illinois in the last ten games, but 6-4 ATS in those contests, and this is likely the best Illini team over that stretch. The Badgers will have revenge on their mind after last season, but they won’t have crowd noise, and they won’t have Jonathan Taylor. There are just too many questions about the Wisconsin offense for me to think they will get enough points on the board to erase a three-touchdown-plus spread. Brandon Peters only threw seven interceptions last season, and Illinois will not likely be out of this game early, so he shouldn’t feel the pressure to force things and maybe make a mistake. We will see how good Mertz is at leading some longer drives without a definite big-play threat on offense, and I can easily see this one being a field position game at a relatively slow pace. That kind of game definitely benefits the Illini, and I think they get 13 on the board with at least one big play to Imatorbhebhe factoring in. Wisconsin finds a rhythm through the second half with Watson getting loose and a WR rushing score alongside the first collegiate touchdown pass for Mertz, but theyo top out at 30 points, and that won’t be enough to cover the spread.

Ted Walker’s Pick to Cover the Spread: Illinois. Bet your Week 8 college football picks for FREE by taking advantage of a 100% real cash bonus on your first deposit of $100 to $1000 at Betnow Sportsbook!