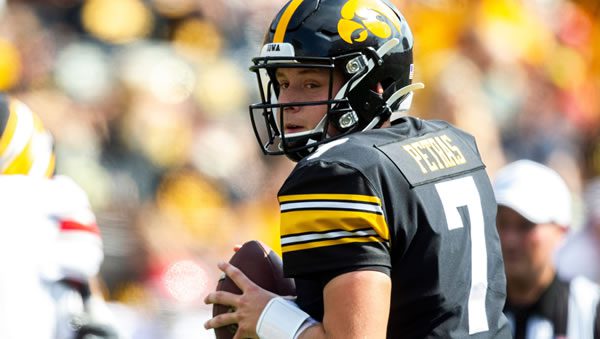 Trophy games are a big deal in the Big Ten, and The Heartland Trophy is on the line when Iowa takes on Wisconsin this weekend. More importantly, control of the Big Ten West is at stake as both teams control their path in Indianapolis, provided either can run the table. Wisconsin has largely owned this rivalry in recent years, winning seven of the eight matchups from 2010 to 2019 before losing in Iowa City last season. Home field hasn’t meant much when these teams go at with the visitor going 11-9 since 2000.

Iowa is 5-0 against the spread in their last five on the road and 4-0-1 in the last five as the underdog. Wisconsin got the ATS win last week but is just 3-8 against the spread in their last 11 overall. They are 1-4 ATS in their previous five at Camp Randall. The UNDER has hit in six of the last eight Iowa games overall and six of eight when Wisconsin plays inside the conference. The 37-point total is about as low as it gets for an NCAA game, but this is a matchup between the 12th and 2nd ranked defenses. Five of the last ten meetings between these teams have produced a final total under 37.

Iowa is coming off a much-needed bye week after a somewhat embarrassing loss to Purdue in Week 7. The Hawkeyes were ranked No.2 at the time but were only able to manage 273 total yards against the Boilermakers while Spencer Petras threw four interceptions. The week off should help fix some of the obvious weak spots, and Iowa has every chance to still cash in on their 6-0 start. Iowa needs some offensive consistency as they rank outside the top-100 in both rushing and passing yards per game. Petras sits right at 60% completions and had just two interceptions before the last game. Tyler Goodson leads the team with 586 rushing yards and five touchdowns, but no Iowa ball carrier is averaging more than 4.5 yards per carry. Things won’t be easier against a Wisconsin run defense that is allowing 1.9 yards per rush. Sam Laporta leads with 28 receptions and 332 receiving yards, but the strength of this passing offense lies in its variability. Six different Hawkeyes have double-digit receptions thus far, and seven different receivers have caught a touchdown pass. Wisconsin has shown the ability to take away a primary option, so spreading the ball around will help Iowa. The strength of the team is the defense, especially a secondary that has notched 15 interceptions, and Iowa leads the NCAA in takeaways. The key matchup will be Iowa’s 7th ranked run defense against the 19th ranked run game of Wisconsin.

Wisconsin looked lost in three losses against Penn State, Notre Dame, and Michigan. Gone was the offensive consistency that was built on an effective rushing game, but the Badgers have rushed for 295 yards per game over the last three contests and now have one of the better backfield duos in the conference. Chez Mellusi leads the teams with 692 yards, but Braelon Allen has come on in recent weeks to notch five rushing scores and is averaging 7.4 yards per carry. The offensive line continues to round into shape, and that is also a positive sign for the meager passing game. Graham Mertz has just two touchdown passes on the season against seven interceptions and attempted just eight passes last week.

Wisconsin is 123rd in passing yards per game and near the bottom of the barrel in turnover differential. They were +3 in that department against Purdue, and it led to a relatively easy day in West Lafayette. Mertz may not have to be special this weekend, but he will have to complete more than five passes to win this one, and taking care of the ball is job #1 against a defense that knows how to take the ball away. Wisconsin’s defense held Purdue to negative-13 yards rushing last week and has allowed just 53.3 yards per game on the ground. Leo Chenal leads the team with five sacks, and the linebacker group has accounted for 10.5 on the season.

Iowa Grinds Out the W

This game might set college football back a few decades as neither of these defenses are going to give up much beyond the cloud of dirt, and neither passing offense looks to be a game-changer. Both teams are at their best when the play-action pass is humming, but that only works when there is a credible threat of a pass play actually working. Give Iowa a small edge there as Petras has been the better passer this entire season. Iowa has been a slow-starting team, while Wisconsin has faltered late in their losses. The team that can reverse that trend the most will be on the right side of the score. Iowa has been much better in close contests, and this one will be tight so give a slight edge to the Hawkeyes there. Wisconsin likely has the higher ceiling if both teams bring their A-game, but I think the respective defenses will make things so tough that Iowa’s higher floor gives them a 16-14 win.

Ted Walker’s Pick to Cover the Spread: Iowa. This is a good game to live bet at Bovada Sportsbook! Most books only have bettable lines during commercials or halftime. These guys offer a line throughout the whole game! Check them out and get a 50% bonus too!