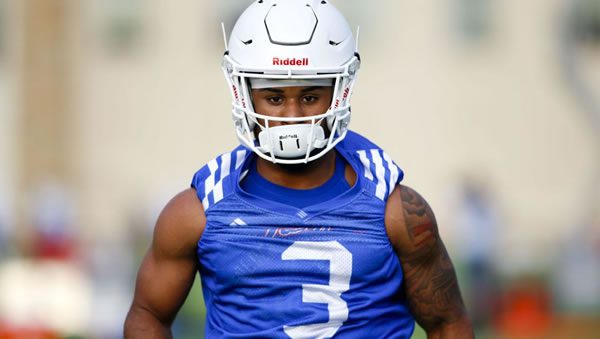 Navy fought Cincinnati tough for a half, and the Midshipmen emerged with a more-than-respectable result against the No. 2 team in the nation, succumbing by only a touchdown. But the big question for the Mids is whether they’re still going to have the motivation to get through their final three conference games (there’s no question they’ll be motivated to face Notre Dame and Army), as they’re not going to be in a bowl unless they can pull off a massive upset of both the Irish and the Black Knights.

Tulsa, on the other hand, has plenty of motivation but a challenging task ahead of it. The Golden Hurricane need to get three of their final five games in order to reach a bowl game, and that’s looking problematic with two of their last four games being road games at undefeated Cincinnati and Southern Methodist. If the Golden Hurricane gets tripped up here, they’ll need to win at least one of those games to become bowl eligible, so expect them to come out with their best effort here. Whether that’s enough to stop a Navy team that’s proven, a strong cover squad is far less certain.

How the Public is Betting the Navy/Tulsa Game

The public is backing Navy, but the sharps are on Tulsa. Sixty-nine percent of tickets have come in on the Midshipmen, but the number has moved a point in Tulsa’s favor, jumping from -10 to -11 for the Golden Hurricane. The total has dropped a point from 48 to 47.

This would really be a great time for Navy to actually be able to throw the ball because Tulsa can’t stop the pass at all. However, the Mids aren’t going to be able to take advantage of that because passing and Navy are not something that’s going to happen out of the triple option. For the year, Tai Lavatai has only attempted 36 passes, and while he’s thrown for solid yardage when he has taken to the air, Navy is going to keep the ball on the ground as much as possible.
The problem is, Navy doesn’t even run it that well this year, as the Mids only gain 212 yards per game on the ground. This is an offense that needs to gain closer to 300 yards on the ground to win, and that’s why the Mids are 1-6 with five games to go. Isaac Ruoss is the best ground threat the Midshipmen have, but he doesn’t even average four yards per carry. For Navy to win, this is going to have to be a defensive battle, as this team cannot keep pace in a shootout.

Davis Brin has got to stop turning the ball over if the Golden Hurricane is going to play in a bowl game. The junior quarterback has eight interceptions in his past five games against ten touchdowns, with three scores coming against a weak Arkansas State defense. Brin has proven inaccurate with his passing, as he’s completed less than 57 percent of his passes three weeks in a row despite a passing average under nine yards per attempt.

Having Shamari Brooks makes a world of difference, as the running back gained 145 yards and scored the winning touchdown in the game against South Florida. But the game never should have come down to that, as the Golden Hurricane almost blew the game with three turnovers and put themselves in a position to lose despite more than doubling the Bulls’ yardage. If the Golden Hurricane beat themselves again, Navy is very likely to take advantage of it, and the Mids’ style of play means that as long as they stay in the game, each possession will take as long as Navy can draw it out. If Tulsa is going to cover this number, it can’t make mistakes.

The road team has been an excellent play in this matchup, as the road team is 7-1 ATS in the past eight meetings between these teams. Plus, Navy has made Chapman Stadium a home away from home, covering in four straight trips to eastern Oklahoma. Tulsa has had an annoying habit of failing to cover when it’s giving points, as the Golden Hurricane has failed to cover in four of five games as a favorite and 11 of 15 games as a home favorite.

Despite these being lesser offenses, they’ve lit up the scoreboard when they’ve faced each other in most instances. Navy has gone over 31 points in five of the past six matchups, with the lone exception coming last year when Tulsa went to Annapolis and won 19-6. Points have actually been a problem for Tulsa against Navy; only once have the Golden Hurricane topped 30 points in this series.

If the Oklahoma winds stick around from Wednesday, this could get very interesting. Wednesday and Thursday are likely to be very windy, with 17-mile per hour winds sticking around into Friday morning. Winds should drop to nine miles per hour by kickoff, but it will remain a chilly night, with temperatures at 44 degrees.

This line is too high. Navy is staying in every game this season, and while the Mids aren’t good enough to get wins, they’re good enough to keep things close. This appears a game that will be fairly close into the fourth quarter before Tulsa gains a slight edge at the end.

Tulsa should win, but I think they’ll win this game by seven or less, not by double digits. Give me the Mids to cover. Check out our Bovada Sportsbook Review to find out why half of those who bet on sports online have a betting account there! Their live betting platform is OFF THE RAILS as they offer a bettable line the whole game (opposed to other books that only offer betting during commercials and halftime!)