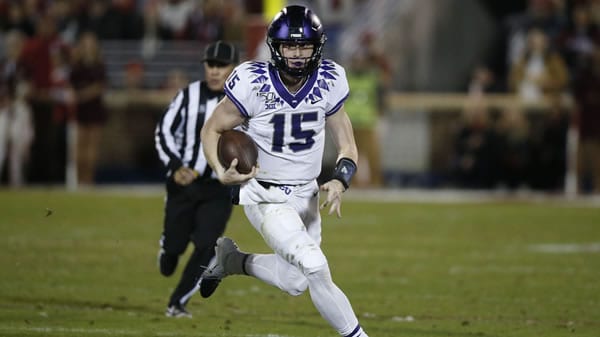 Point Spread: Wildcats +2.5/Horned Frogs -2.5 (STOP betting games at -110! YOU-ARE-WASTING-MONEY! Start laying only -105 TODAY at BAS Sportsbook! You’ll be so glad you made the switch!)

The Wildcats come into the game with an overall record of 9-3. This strong play includes going 7-2 in Big 12 action. This season, the Wildcats have been favored in 8 games while posting an ATS mark of 9-3-0. Their average over-under betting line is 53.54 leading to an over-under record of 6-6-0.

In their last game, the Wildcats are coming off a 47-27 win over Kansas. In addition, they added an ATS win as they were 12.0 favorites on the spread. The team finished the game by throwing for 2 touchdown passes. Overall, the Wildcats had 213 passing yards on a completion percentage of 52.4%. The team ended the game with 4 rushing touchdowns, along with a total of 230 yards on the ground.

Adrian Martinez heads into the game as the team’s top quarterback, with a current passer rating of 92.69. So far, he has completed 118 passes for a total of 1261 yards. Wide receiver Malik Knowles has come up with the most production for the team, with a total of 679 receiving yards. The Wildcats have turned to running back Deuce Vaughn a total of 245 times for a total of 1295 rushing yards.

This week, the Horned Frogs will look to pick up another win, as they are coming off a 62-14 win over Iowa State. With the 48-point victory, TCU also covered the spread. In the game, TCU finished with 4 touchdowns through the air while throwing for 246 yards. The team ended the game with 2 rushing touchdowns, along with a total of 131 yards on the ground.

The team’s leading quarterback is Max Duggan, who comes into the game with a passer rating of 121.44 on a completion percentage of 66.6%. Wide receiver Quentin Johnston has come up with the most production for the team, with a total of 764 receiving yards. The team’s injury report lists him as questionable (Ankle). The top option in the run game for the team is Kendre Miller, who has carried the ball 199 times for a total of 1260 yards.

Kansas State has played well in their previous 5 road games, going 4-1-0 straight up. In this stretch, they averaged 31.6 points per game while allowing 23.0. The team also performed well vs the spread at 4-1-0.

TCU has played well in their previous 5 home games, going 5-0-0 straight up. In this stretch, they averaged 46.4 points per game while allowing 26.0. The team also performed well vs the spread at 4-1-0.

More Picks: Get our Toledo vs. Ohio analysis plus spread pick >>>

Heading into the game, the Wildcats are ranked 34th in scoring and are facing off against a TCU defense, allowing an average of 24.5 points per game. One aspect of the game that could benefit a Kansas State offense that struggles to generate big plays in the passing attack is that they are facing off a TCU defense that has yet to generate a lot of pressure on opposing quarterbacks. So far, the Horned Frogs are just 122nd in sacks per game.

So far, Kansas State has relied heavily on the ground game, as they rank 24th in attempts per game, with an average of 40.5. This heavy usage has led to an average of 210.0 rush yards per game, placing them 17th in the NCAA. This week, the Wildcats will be facing a TCU defense ranked 84th in rush yards allowed per game. This year, they have averaged 225.0 yards per game when facing defenses ranked outside the top 50.

For the season, the Horned Frogs are averaging 41.33 points per game on offense, which is good for 4th most in college football. This will be a good matchup to watch, as Kansas State is allowing just 19.4 points per game this season.

This season, the run game has not been a big part of the TCU offense, as they are averaging just 38.33 attempts per game. With their limited opportunites, they have an average of 198.5 yards per contest, good for 28th in the NCAA. This week, the Horned Frogs will be facing a Kansas State defense that is ranked 69th in rush yards allowed per game. So far, they are averaging 209.2 yards per game when facing defenses ranked outside the top 50.

The Horned Frogs took awhile to get going in the earlier match up but dominated in the second half outscoring K-State 21-0. I think that continues this week again and TCU gets the win and cover. Bet your Week 14 NCAA football predictions for FREE by taking advantage of a 100% real cash bonus up to $500 at the web’s oldest and most trusted sportsbook when you enter bonus promo code PREDICTEM on the Special Offers page at Everygame Sportsbook! In business since 1983!