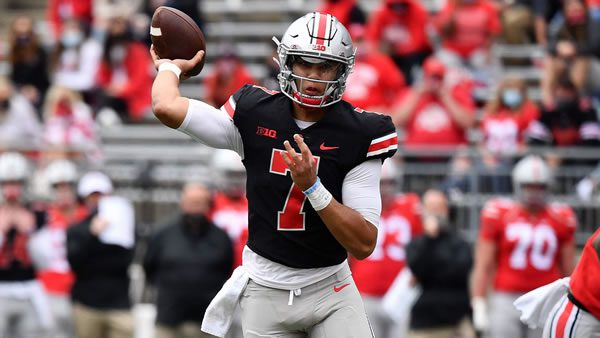 Could this be the year that Ohio State finally breaks up the Southeast’s dominance of the College Football Playoff? Since the Buckeyes won the first one in 2015, six of the past seven playoff finals have featured the same four teams: Clemson, Alabama, Georgia, and LSU. Ohio State’s appearance in 2021 was the only exception, and the Buckeyes got whacked in the final by Alabama, making it seven straight titles for that one region of the country. Ohio State looks like it might be talented enough to finally play with Georgia and Alabama this season, but the Buckeyes still have to prove it when it matters most.

They also have to get there first, and a game that looked like it could be a potential challenge to them in Michigan State really isn’t looking that way now. The Spartans’ run to a New Year’s Six bowl last season appears to have been a fluke more than anything else, as Michigan State has quickly fallen back to the pack and even gone past it in the Big Ten East. After feasting on two MAC teams to open the season, Michigan State stumbled at Washington, then got blown out by Minnesota and lost at Maryland, giving the Spartans a three-game losing streak that could easily spiral out of control. With Ohio State, Michigan, and Penn State all still to come, Michigan State is now facing the very real possibility that it could fall short of a bowl game in a full season for the first time since 2016. The Spartans did once topple Ohio State as a four-touchdown underdog, but that was back in 1997, and some guy named Saban was the Spartans’ coach back then. Needless to say, a repeat of that isn’t looking likely.

How the Public is Betting the Ohio State/Michigan State Game

Don’t expect this week’s game to look like last week’s matchup with Rutgers. Ohio State didn’t bother to pass the ball much against the Scarlet Knights for two reasons: they didn’t need to throw to win, and Rutgers’ defensive strength is defending the pass. C.J. Stroud simply took what was available to him, which became a Miyan Williams run more often than not. With Treveyon Henderson back on the field in this matchup, Ohio State might try to mix things up on the ground and keep both backs fresh throughout this one. The Buckeyes might also take to the skies because they didn’t get to throw much last week, and Michigan State is just not as strong on defense as Rutgers is. Ohio State does everything well, which is why the Buckeyes opted to let Williams pound the rock against the Scarlet Knights. There was simply no point in attacking Rutgers’ strength when Ohio State could just as easily control the game by attacking Rutgers’ weakness. Michigan State is nowhere near that strong against the pass, so the Buckeyes can air it out here.

The Spartans’ offense just isn’t the same with Kenneth Walker III in Seattle. Payton Thorne now has to do too much with the football, and it’s showing in his play. He’s already tossed six interceptions against just eight touchdowns, and the Spartans don’t have the power on the ground to try and win games in a different way. Jalen Berger has run well for Michigan State, but he is no Walker, and the Spartans are not as committed to the run game as they were a season ago. Without Walker controlling games, what usually happens is that the Spartans have to give up on the ground game too early and start forcing Thorne to press. Against Maryland, Michigan State put the ball in the air 44 times but only gained 221 yards and didn’t score a point in the second half. Against Ohio State, falling behind early is basically a death sentence; the Spartans have to get something going on the ground to have a chance. Thorne simply isn’t going to be able to find holes in the Ohio State defense any other way.

There was once a time when Michigan State was a reliable thorn in Ohio State’s side, but those days are long gone. Even with the Spartans occasionally making a run in the Big Ten, they haven’t done much against the Buckeyes and especially not at home. Spartan Stadium has essentially been Columbus North, as the Buckeyes haven’t lost in East Lansing since 1999 and have covered on seven of their past nine trips to Michigan State. Michigan State has been a much different team at home, covering in seven of its last ten games at home with two pushes. But the most recent home game was a 34-7 drilling at the hands of Minnesota, and the Spartans are facing a team that is dynamite in October. Ohio State has covered in eight of its past 10 October games with a push, and the over has cashed in five straight Buckeye road games.

This is Big Ten weather. The temperature will fall to around 56 degrees at kickoff, with hardly any cloud cover and winds blowing at 12 miles per hour to the west-southwest. This game could be challenging for kickers, but that shouldn’t matter much.

Ohio State should be ready to tee off on Michigan State after having to deal with an aggressive Rutgers pass defense. The Buckeyes have the talent to really make this a blowout, and given that the Spartans really can’t keep them off the field, I think Ohio State will manage exactly that. Give me the Buckeyes.