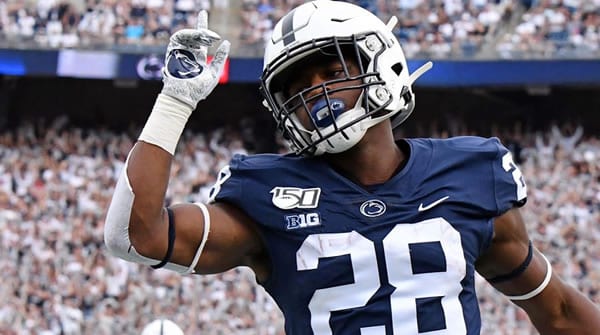 Two of the most disappointing teams in college football this season hook up when Michigan hosts Penn State Saturday afternoon at the Big House in Ann Arbor. The Wolverines are 2-3 and maybe playing out the string on the Harbaugh era. The Nittany Lions, meanwhile, are winless and probably wishing this season had never taken place. Michigan is favored for this one, but by less than a field goal. Who do we like here for our free college football pick?

College football betting odds opened Michigan at -3.5 over Penn State, with an over/under of right around 60. Early betting action then dipped the Wolverines to just below a field goal, at -2.5, and lowered that total to 58.5.

The Nittany Lions are 0-5 for the first time in program history after losing at home to Iowa last week 41-21. Penn State led the Hawkeyes 7-3 after one quarter but gave up the next 28 points of the game to fall behind 31-7. The Lions pulled to within 31-21 late in the third quarter but faded from there and lost as one-point underdogs.

Penn State got out-gained by Iowa 361-342, and most of the yardage the Lions made came in catch-up mode. The Nittany Lions also got out-rushed 175-62 and lost the turnover battle 4-1, resulting in a -17 points differential.

Penn State has actually out-gained three of its five opponents this season, but it’s also turned the ball over 13 times and owns a -9 turnover ratio.

Two weeks ago, the Lions out-gained Nebraska by 203 yards, but two turnovers led directly to 10 Cornhuskers points in a 30-23 loss. Three weeks ago, Penn State out-gained Maryland by 29 yards but lost 35-19.

Also, the Nittany Lions defense has allowed each of its five opponents this season to score on their first possessions of the game – four touchdowns and a field goal.

At 0-5, Penn State is just looking for something – anything – to make this holiday season a tad bit brighter.

Meanwhile, Michigan just broke a three-game losing skid with a 48-42 triple-overtime victory at Rutgers last week. The Wolverines, playing as 11-point favorites, spotted the Scarlet Knights the first 17 points of the game, then later led 35-27. Michigan allowed Rutgers to tie the score on a touchdown and a two-point conversion with 27 seconds left, forcing OT but eventually won it with a TD and a defensive stop in the third overtime period.

Michigan produced 496 yards of total offense but gave up 486 yards of Knights offense. Ultimately, a 95-yard return of the second-half kickoff for a touchdown made the difference for the Wolverines.

Michigan has now out-gained and out-rushed three of its five opponents this season.

At 2-3 overall, Michigan is in danger of missing a bowl this season.

As of this writing, both these teams’ quarterback situations are up in the air. Nobody’s hurt. It’s just that both teams are juggling guys at that spot at the moment, and neither coach has announced a starter for this week. Sounds like the makings of an ugly game.

The Wolverines are 4-2 SU, 5-1 ATS over the last six meetings with the Nittany Lions. Last year Penn State pounced out to a 21-0 second-quarter lead, but Michigan fought back to within 28-21 and reached the Lions’ 3-yard line late, only to come up empty. However, the Wolverines did come up with a back-door cover as dogs of 7.5 points.

Also, that game played over a total of 47.

Totals are split 2-2-1 in Penn State games this season, which are averaging 61 points against an average over/under of 58.

Overs are 4-1 in Michigan games this season, which are averaging 67 points against an average O/U of 53.

Overs are 7-1 over the last eight meetings between these teams, which have trended surprisingly high-scoring.

Coming into this season, we thought Penn State had the better team than Michigan, and through the disaster that’s been the first five games for both these teams, we still believe that’s the case. So we like the Lions to get their first win of the season here. Also, with both teams getting iffy play at QB, we’ll go against the recent trend in this series and play the under. Did you know that you can bet on football/basketball games at -105 odds instead of -110? Making the switch to reduced juice betting will save you THOUSANDS of dollars over the long haul! Find this sweet offer at BetAnySports Sportsbook!