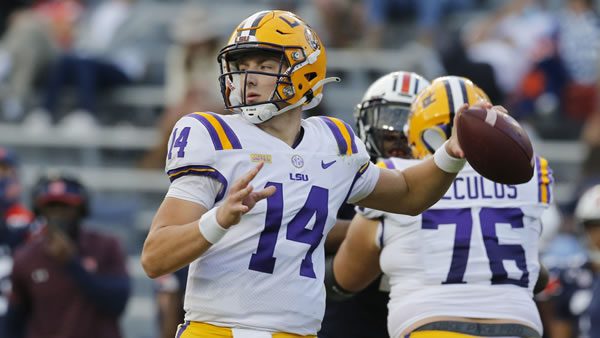 Point Spread: LSU +28.5/Ala -28.5 (Make Bama a -8.5 favorite by inserting them into a massive 20 point college football teaser only found at Wagerweb Sportsbook!)

Alabama-LSU usually is one of the biggest college football games of the year, but last year’s meeting was a blow-out, and this year’s meeting, slated for Saturday night in Tuscaloosa, might be, too. The Tide is still very much in the hunt for another invitation to the College Football Playoff while the Tigers are playing for a lame-duck head coach, scrambling for a couple more wins just to become bowl-eligible.

Alabama is favored by almost the exact number it was for last year’s meeting with LSU, and it covered that game relatively easily. Which way are we going here with our free college football betting pick?

This week’s college football betting lines opened Alabama at -28.5, with an over/under of right around 66. Both those figures were holding steady in the early betting action.

The Tigers are 4-4 on the season after losing at Ole Miss two weeks ago 31-17. LSU then had last week off.

Louisiana State took an early 7-0 lead on the Rebels two weeks ago and then drove deep inside Ole Miss territory but threw an interception. The Tigers then gave up a 31-0 Rebs run spanning the halves before scoring the last 10 points of the game to make the final score a bit more respectable. But they also whiffed ATS as nine-point underdogs.

So the Tigers have been out-gained by each of their last five opponents and out-rushed by four of their previous five foes.

At 2-3 in conference play, LSU is dead in the SEC West race and still needs two more wins over its last four games, which is no sure thing, to become bowl-eligible.

The Tide, meanwhile, is 7-1 on the season after topping Tennessee two weeks ago 52-24. Alabama then also had last week off.

‘Bama actually trailed the Vols a couple of weeks ago 14-7 after one quarter but led 21-14 at the half. The Tide later only led 31-24 early in the fourth quarter but tacked on three scores from there to secure the victory and the cash as 24-point favorites.

So the Tide has out-gained and out-rushed every opponent this season except Florida.

At 4-1 in conference play, Alabama leads the SEC West by a half-game over second-place Auburn. And at No. 3 in this week’s polls, the Tide remains right in the running for yet another trip to the CFP.

Also, that game played over a total of 64 with a whole quarter to spare.

Totals are split 4-4 in Tigers games this season, which are averaging 59 total points.

Overs are 5-3 in Tide games this season, which are averaging 67 points.

Unders are 7-3 over the last ten meetings between these two teams, which have trended low-scoring, except for the last couple of games.

Alabama is playing for big stakes, a spot in the CFP, and style points might still come into play. Also, five of ‘Bama’s wins this season have come by at least 28 points. LSU, meanwhile, is a disheartened outfit, playing for a lame-duck coach and banged-up, with an ifufy situation at QB. Alabama wasn’t a great bet over recent seasons as a huge favorite because it often took its foot off the gas, but the Tide is actually now 7-2 ATS, its last nine games favored by 24 points or more. We’re giving the points here with Alabama. Bet your Week 10 college football predictions for FREE by taking advantage of a 100% REAL CASH bonus on your first deposit of $100 to $300 at MyBookie Sportsbook! (Must sign up through this special link AND use bonus code PREDICT100 to receive the special bonus!)