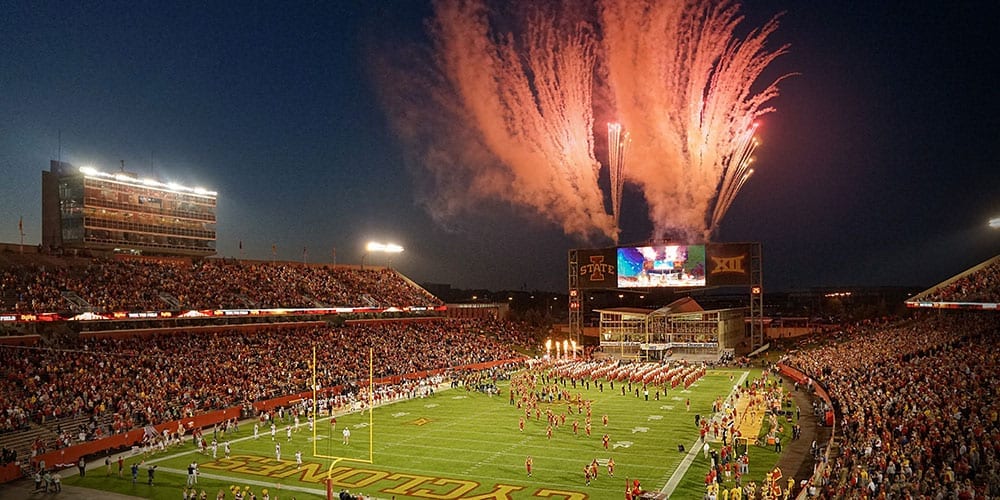 The Oklahoma Sooners will travel to Ames, Iowa to face off with the Iowa State Cyclones for a high noon showdown on Saturday, September 15th, 2018 at Jack Trice Stadium. The contest will be a Big 12 conference meeting and the first conference game for both teams. The game will be aired for national audiences on FOX. The last meeting between the two sides was one that will forever be etched in the memories of Cyclones fans when Iowa State came from behind, trailing by as much as 14 points to defeat Oklahoma in Norman by a score of 38-31. The Cyclones closed as a 31-point underdog heading into the contest but nevertheless pulled what was a historic upset. Previous to this, Oklahoma had won 18 straight against Iowa State. The Cyclones have covered in the last two meetings between these old foes.

A Tough Start for Cy

Iowa State opened its season with a hard loss against a team it hates to lose to in arch-rival Iowa. The Cyclones would hang around all game in what was largely a defensive struggle for the coveted Cy-Hawk Trophy. Despite their valiant effort, the Clones would come up short at Kinnick Stadium when Iowa would pull away by a score of 13-3. Throughout the course of the week in the build-up to the cross-state bedlam we saw the line hover around the three-point mark. Heading into this meeting with OU, we now see the Cyclones taking back an additional two touchdowns or more.

A Penchant For Being A Pest; A Flare For The Dramatic

Poetic stanzas could be written about the Iowa State Cyclones and their zest to take it to elite competition. We have seen numerous episodes of this in the aforementioned Battle For The Cy-Hawk Trophy but we’ve also seen Ames become animated when the likes of Nebraska and Oklahoma State have come to town. Iowa State has pulled landmark upsets against the opponents as well historically. With one of their best teams to take the field in recent history, ISU will assuredly be revved up again as it prepares to curate hosting duties.

The Sooners have gotten off to an excellent start as they have gone 2-0 out of the gate against both Florida Atlantic and UCLA. In their endeavors, the Sooners have already put up over 100 points of offense and seemingly have not missed a beat since seeing a Heisman Trophy winner in quarterback Baker Mayfield graduate from Norman and matriculate to the NFL. Over the span of their two wins, the Sooners have gone 1-1 ATS.

As a result of their incendiary start, we have already seen analysts pencil the Sooners in as the repeating Big 12 Champion followed up by a second consecutive appearance as a participant in the College Football Playoff. However, the sample size of OU’s work is not a good comprehensive body to make these extrapolations. Two weeks ago before the season started, there was a lot of speculation into how Oklahoma will follow up a stellar 2017 with many playing up the re-emergence of its arch nemesis Texas and the field at-large consisting of West Virginia, TCU, and Oklahoma State comprising some of the other names mentioned. However, that conversation has seemingly gone mute as the Sooners have once again been heralded as a team that stands well above the rest. This kind of hyperbole combined with OU’s reputation as a historic heavyweight can make any takers susceptible to overlays by virtue of the media machine that surrounds the Crimson and Cream.

The Cyclones return a seasoned core of skilled players in quarterback Kyle Kempt and running back David Montgomery, both of whom played a pivotal role in the upset last year in Norman. Now, they get the opportunity to play the Goliath of the Big 12 at home. The fact remains that Iowa State is not scared of Oklahoma. After all, they are the ones who had the slingshot to bring that OU when no one else could in 2017. While OU may be the better team on paper, the Clones have the emotional edge in this contest. Given the fact football is as much a mental sport as it is physical, there is a very good chance here that we see ISU hang around for four quarters. Sure, another upset would be titanic and something that would be unprecedented but don’t tell Iowa State anything like that because they just might be so inclined to be the thorn in the side yet again. Cyclones will produce another scare.