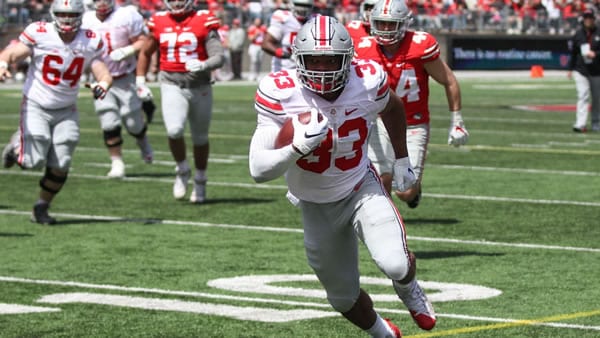 Ohio State absolutely owns the “rivalry” with Rutgers, winning all six games since the Scarlet Knights joined the Big Ten Conference back in 2014. And the Buckeyes didn’t just win those games; they slaughtered the Knights by an average score of 55-8, playing 5-1 against the spread in the process. Last year Rutgers finally broke through and at least covered the spread, but only because Ohio State was favored by such a ridiculous amount. The Buckeyes are favored by another big number for Saturday night’s Big Ten East meeting at the Horseshoe in Columbus. How are we playing this game with our free college football pick?

College football betting odds opened Ohio State at -37.5 over Rutgers, with an over/under of 63.5. Both those figures were holding steady in the early betting action.

Rutgers is 1-1 to begin its second stint under Coach Schiano, after losing at home to Indiana last Saturday 37-21. The Knights actually drew first blood with a touchdown late in the first quarter, then gave up a 23-0 Hoosiers run spanning the halves to trail 23-7. Rutgers got back within one score at 23-15 late in the third quarter but faded from there and came up short ATS as an 11-point dog.

On the day, the Scarlet Knights got out-gained by Indiana 347-247 and lost the turnover battle 3-0, resulting in a -17 points differential. They also came up empty twice on fourth downs in Hoosiers territory when the cover was still at stake.

Rutgers opened this season two weeks ago with that 38-27 upset victory at Michigan State, which looks better now after the Spartans upset Michigan last week.

COLLEGE KID BONUS: DEPOSIT $25 AND GET A FREE $50 BET AT INTERTOPS. MUST USE BONUS CODE ROOKIE200 RIGHT AFTER DEPOSITING TO GET THE BONUS!

Ohio State, meanwhile, is 2-0 on the season, after beating Penn State in Happy Valley Saturday night 38-25. The Buckeyes drove their first two possessions of the game 75 and 45 yards to touchdowns and led 21-6 into the half. OSU then allowed the Nittany Lions to get within 21-13 early in the third quarter but scored the next 10 points and closed things out from there for the win and the cover as a 10-point favorite.

Ohio State opened its season two weeks ago with a 52-17 victory over Nebraska and covered the spread at -28 on a touchdown with 18 seconds left in the game.

Ohio State leads the all-time series with Rutgers 6-0, all games played since RU joined the Big Ten six seasons ago. Last year the Buckeyes led 21-0 early and 49-7 midway through the third quarter, then took their foot off the gas, allowed the Knights to score a couple of meaningless touchdowns, won 56-21 but lost ATS as 52-point favorites!

Also, that game played over a total of 63.

Ohio State is a national championship contender while Rutgers is undergoing a rebuild. But the Buckeyes are also only 8-8 ATS their last 16 times out, giving 30 or more points, while the Knights are 4-1 ATS their previous five games, getting 30 or more. Also, Coach Schiano inherited 16 returning starters from last season, eight on each side of the ball, so the cupboard wasn’t exactly bare when he arrived. Also, an empty Ohio Stadium probably helps Rutgers. And just like last year, we won’t be surprised if Ohio State grabs a considerable lead, then eases up. The Buckeyes are going to win this game, but we’ll take the Scarlet Knights and the points for our free college football pick. Bet your Week 10 college football picks for FREE by taking advantage of a 100% REAL CASH bonus on your first deposit of $100 to $1000 at BetNow Sportsbook!