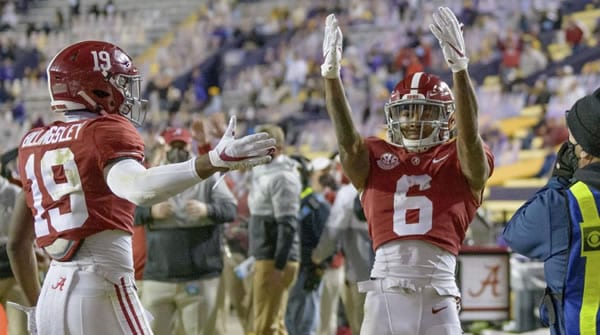 A week ago, this felt like it might be a relatively solid matchup between two teams with national championship aspirations. Instead, it looks like nothing more than a coronation for an Alabama team that has barely been scratched since the third game of the season. The Tide hasn’t given up more than 17 points in a game since Oct. 17 against Georgia, nor have they failed to cover since Oct. 10 at Mississippi. Over the past seven games, the closest anyone has come to Alabama was a 29-point win over Auburn.

Conversely, Florida is limping into this game. The Gators’ offense wasn’t quite up to its lofty standards of the first few weeks of the season, but the defense was at least holding its own, keeping Florida on track against weaker opponents. At least, that was the case until a hobbled LSU squad walked into Gainesville and upset the Gators, claiming a 37-34 victory in a game it really had no right to win. And that’s been the problem all year for Florida: the Gators have tended to play to the level of their competition. When they’ve faced good teams, such as Georgia, the Gators have been up to the challenge and played pretty well on offense. But against lesser foes, Florida simply hasn’t been up to snuff. Now they face the king of the SEC on the league’s biggest stage, with a playoff spot on the line. Can Florida find a way to rise up and make Alabama sweat?

How the Public is Betting the Alabama/Florida Game

The Gators have received a frosty reception from both public and sharp bettors, as 69 percent of the tickets are on Alabama, and the money is heading the same direction. The line started at 14 points, but Alabama bets have pushed it to -17. The total ticked up two points, jumping to 74.5.

Alabama:
Linebacker Christian Harris (shoulder) is questionable, while wide receiver Jaylen Waddle (ankle) is out for the season.

Whether it’s been on the ground or in the air, nobody’s been able to stop Alabama all season. Given that the Tide has played nothing but SEC opposition thanks to the pandemic, that’s even more impressive than it usually is. What makes the Tide’s attack so effective is the fact that Mac Jones has proven incredibly accurate with his passing, tossing just three interceptions all season. Throw in a quality ground game led by Najee Harris, and it’s easy to see why the Tide have regularly put up scores in the 50s and 60s.

Alabama’s offense could have been even more dangerous if Jaylen Waddle hadn’t been injured halfway through the season, but DeVonta Smith has more than made up for his absence. Not only does Smith have 83 catches and 15 touchdowns on the season, but his punt return last week against Arkansas was an excellent example of how Smith can singlehandedly change a contest. In the first quarter, the Tide’s offense only managed a field goal, but Smith’s punt return pulled Alabama ahead, and the Tide never looked back from there.

For the past two years now, Florida’s been doing a lot of passing because it simply cannot run the ball. The Gators have mostly gotten away with it because their trio of Kadarius Toney, Trevon Grimes, and tight end Kyle Pitts have proven a reliable set of pass-catchers for quarterback Kyle Trask. Still, Florida is going to have a hard time keeping Alabama off the field if it can’t move the ball on the ground.

Unfortunately for the Gators, Dameon Pierce hasn’t really shown much of an ability to handle the job, averaging a somewhat pedestrian 4.7 yards per carry. That’s far from terrible, but it also isn’t enough to keep the ball for all that long, which means that Florida has to keep scoring in order to earn victories. When the Gators’ offense isn’t clicking on all cylinders, as was the case against LSU, Florida just isn’t on the same level as a team like Alabama. Trask has to take care of the ball better than he did against the Tigers, or this one won’t be close.

One side’s been ascending, while the other really isn’t getting the job done. While Alabama has covered in seven consecutive games, Florida has failed to cover in a month. The Gators are 0-3-1 with a push, and the three spread losses really weren’t close to getting the cover. There’s also the matter of the Eastern Division’s horrible performance in the SEC title game in recent years. Ten of the past 11 SEC champions have come from the West (the lone exception was Georgia in 2017), and most of those games haven’t been close, with only two of them (both Georgia) decided by less than 14 points. This will actually be the fourth time during this stretch that Florida’s opponent will be Alabama, and the Tide’s average margin of victory in those games has been 23.7 points.

That does fit well with trends for both schools in this series, as the Tide have covered in five of the past six meetings. The over appears strong as well, hitting in four straight contests.

There’s no weather to worry about inside Mercedes-Benz Stadium, so no issues here.

It’s weird to think about anyone getting 17 points in a battle of teams in the top 10, but that’s where we are, and it’s because Alabama has been that dominant as of late. The Tide appear to have another gear that only great teams are able to reach, and Florida just isn’t on that level. I’m not comfortable giving this many points, but it’s Alabama in an SEC title game, and you just don’t bet against Nick Saban in a league championship game.

I don’t love the idea, but I will take the Tide to cruise to an SEC crown. Note: If you’re a college kid, you need to be saving ever dollar you can get your mitts on! This goes for us old guys too! So why bet on games at -110 when you could be having to only lay -105? It doesn’t make sense! Start betting cheaper today at BetAnySports! You’ll be so glad you made the switch!