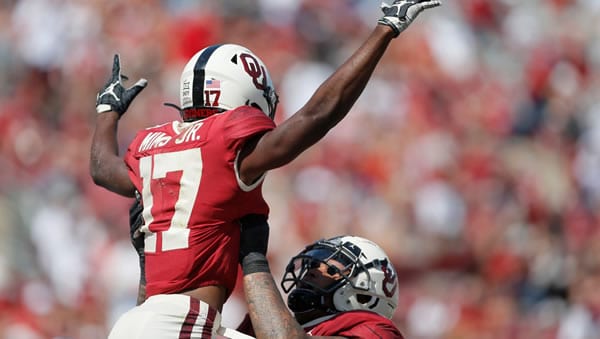 On the one hand, you have Oklahoma, the five-time defending Big 12 champion and owners of 49 conference championships in its long and decorated history. On the other, you have Iowa State, which hasn’t won a conference championship in football since 1912, and that only because the Cyclones played just two league games that year and shared the title with a Nebraska squad that they didn’t even play. To make matters worse, Iowa State has a long and horrible history against Oklahoma, owning a 7-76-2 record against the Sooners all-time.

But things have changed in Ames under Matt Campbell, who owns two of those seven Iowa State wins over Oklahoma and has earned them both in the past four years. With a win here, the Cyclone seniors would do something no Iowa State senior class has ever done: graduate with a winning record against the Sooners. Iowa State comes into this game playing its best football, as the Cyclones have won five straight and held their past three opponents to a combined 26 points.

However, Oklahoma’s been one of the nation’s hottest teams in its own right, as the Sooners haven’t lost since their 37-30 loss at Iowa State. Since then, they’ve won six in a row, and they’ve been so successful in the Big 12 championship game that it really should be renamed the Oklahoma Invitational. The Sooners have won all four league titles since the championship game returned in 2016, and they’ve won eight of the past ten conference championship games overall. The Sooners have been nearly invincible in this contest, as they own a 10-1 record all-time in the Big 12 title game, with the one loss coming to Kansas State in 2003. Can they continue to hold their grip on the conference, or is it finally time for Iowa State to end its long wait for a championship?

How the Public is Betting the Oklahoma/Iowa State Game

Even though Iowa State beat Oklahoma earlier in the season, the money still rides with the Sooners. The public leans in the Cyclones’ direction with 53 percent backing Iowa State, but the money on Oklahoma has pushed the line from -5 to -5.5. The total has dropped slightly, falling from 58.5 to 58.

Without Stogner on the field, Oklahoma’s nickel-and-dime offense might have some problems moving the ball as effectively on Iowa State as they did in the first meeting. The Sooners did hit the Cyclones with some big plays, but Charleston Rambo and Seth McGowan didn’t do much outside of catches of 51 and 35 yards, respectively. Take away those two catches, and Rambo and McGowan combined for five catches for just 17 yards.

Oklahoma doesn’t really have much of a choice but to try to work the ball down the field because it’s the Sooners’ identity and running the ball isn’t how you beat Iowa State even if you have a good ground game. The Sooners don’t have that to their credit, as they didn’t have a back break 50 yards against the Cyclones in the first matchup. Instead, the pressure will be on Spencer Rattler to manage the offense and avoid turnovers, which could be a tough ask of a freshman quarterback. Rattler handled Iowa State well in the first matchup, but he’s never played on this stage before and has to avoid getting overwhelmed by the moment.

Forget that Oklahoma has the top run defense in the Big 12 because Iowa State certainly will. The Cyclones can afford to forget about the Sooner run defense because they have Breece Hall, who’s been running like a man possessed this season. Hall rushed for 139 yards and two touchdowns against the Sooners in the first meeting, and he’s yet to be held under 90 rushing yards and hasn’t failed to score in any game this season.

However, that’s only going to work as long as Iowa State is in a position to run the football, and that means that either the offense has to be ready from the beginning or Brock Purdy has to be better than he was in the first meeting. Purdy didn’t do anything to lose the game, but he certainly didn’t win it for the Cyclones, as he only completed half of his passes in the victory. He doesn’t have to be as on-point as he was against West Virginia or Kansas State, where he threw just three and four incompletions, respectively, but he does have to ensure that Iowa State is moving the ball through the air.

Every time Matt Campbell has coached against Oklahoma, his Iowa State team has been the underdog. And every time, Cyclone bettors have been the ones cashing when the game is over. Iowa State has covered in each of the past five matchups with Oklahoma and has won outright twice, with all five games decided by 10 points or less. Over bettors have also headed to the bank, as each of the past four matchups has hit the total. If the under does cash in this game, it’d be the first time in eight years that an Oklahoma-Iowa State matchup didn’t feature at least 58 points.

Temperatures are expected to be 58 degrees in Arlington, but with showers expected, the Big 12 will likely order the roof closed.

Oklahoma has the pedigree, but the Sooners are a younger squad that hasn’t been in a moment like this. Iowa State is an older, experienced team that’s been on the doorstep for years and believes that it’s finally ready to break through and bring glory to a program that has never experienced it. Plus, Campbell has been very successful against Oklahoma in his time at Iowa State, and there’s also the fact that Iowa State already won this matchup once.

Once again, I think Iowa State leaves with a cover, and I wouldn’t be surprised if the Cyclones also leave with a win. Rough football season? Need a bankroll boost for the upcoming hoops season? Deposit $300 and get an extra $300 in free bets when you open an account at MyBookie! You must use bonus code PREDICT100 when signing up! Check out our MyBookie Review!