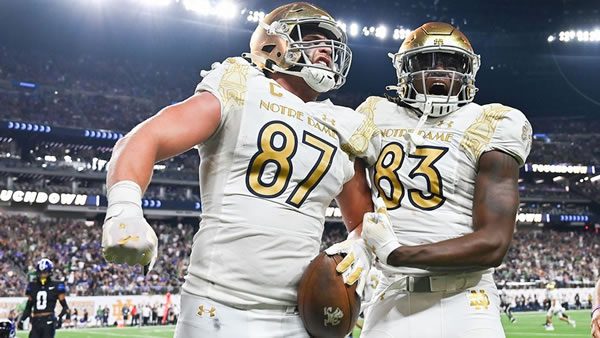 Point Spread: STAN +17 / ND -17 (Wagerweb – You can make the Cardinal +37 or the Irish +3 by inserting either into a massive 20 point college football teaser found there!)

The Stanford Cardinal and Notre Dame Fighting Irish meet on Saturday for a primetime showdown in their now annual rivalry battle for the Legends Trophy. Notre Dame leads the all-time series 22-13, including wins in the last three in a row by an average of over 24 points per game.

After posting a record of 82-26 from 2011-2018 that included three Pac-12 Championships, Stanford has since gone just 12-23. Things have pretty much fallen off a cliff of late, as the Cardinal are now mired in a 1-11 slump over their last twelve games, with their only victory coming against FCS-level Colgate. David Shaw now finds himself as the odds-on favorite to be the next head coach fired in college football, and how he leads his team the rest of the way will very much decide his fate on the Stanford sidelines.

One highlight of the early season for the Cardinal was the play of running back EJ Smith, who ran for over 200 yards and was averaging 6.9 yards per carry with four touchdowns scored before an undisclosed injury knocked him out of the lineup after just two games. Casey Filkins has done well in his place and will continue to be relied upon as the focal point of the backfield with Smith’s future status up in the air, though the new starter faces a stiff test this week against a tough Notre Dame front led by star lineman Isaiah Foskey.

Due to the loss of Smith and, more so, the fact they are usually losing and facing a comeback situation in their games, Stanford has had to rely more on quarterback Tanner McKee than initially expected. He has performed tolerably enough for the Cardinal, completing 63% of his passes and throwing for ten touchdowns compared to five interceptions, but clearly not at an elite or consistent enough level to catapult his team out of the Pac-12 basement. The Irish pass defense has only generated one interception on the season, and it was a gimme floater on the first play from scrimmage last week against BYU, while the Stanford offense ranks 129th in the country with eight offensive giveaways on the year, so it will be an interesting and possibly game deciding development to see who which way the turnover battle goes on Saturday.

The top options through the air for McKee and Stanford are wide receivers Michael Wilson, Elijah Higgins, and Brycen Tremayne, along with tight end Benjamin Yurosek. Wilson has been the best of the bunch so far and leads the team in yards (352) and touchdowns (4), though nearly half of both came in one game, and he will look to get off the snide against the Irish after posting just four receptions for 64 yards over the last two weeks. Higgins is tops in receptions but has had difficulty finding the endzone going back to last season, with just one touchdown in his past nine games, while Tremayne appears to be the only one riding any sort of positive momentum after posting six receptions for 82 yards and two scores last week against Oregon State.

While the Stanford passing game has struggled of late, the Irish have found their answer with Drew Pyne at quarterback. The team has gone 3-0 since he took over at the position, and Pyne has more than delivered through the air in their recent run of victories, with eight touchdown passes compared to only one interception and having completed at least 70 percent of his passes in all three games. The Cardinal have just two interceptions on the season and rank defensively 110th in scoring and 111th in yards per game, so there is no reason to believe that Pyne and the Irish passing game can’t continue to find similar success.

Notre Dame tight end Michael Mayer continued to build upon a dominant season a week ago against the Cougars. After breaking the Irish tight end record for receptions and yards in a season in 2021, Mayer set the all-time receptions mark versus BYU, passing Tyler Eifert. He will likely surpass the former Cincinnati Bengal as well in all-time yards, needing just 200 more before the end of the season and Mayer moves on to the NFL.

Mayer is undoubtedly Drew Pyne’s top target in the Irish offense, but the team could have a quality second fiddle developing in wide receiver Jayden Thomas. The freshman has dazzled in practice and seized the moment against the Cougars with three receptions, including a highlight reel catch for a touchdown. If Thomas can continue his emergence, and certainly has a good opportunity to do so this week against a porous Cardinal defense, it will provide another receiver option alongside Lorenzo Styles and go a long way toward opening up the field for Mayer and Pyne alike.

LEADER OF THE PACK

The talk on the Notre Dame broadcast last week (wow, do they miss Mike Tirico) was about the three-headed monster a running back the team has in Audric Estime, Chris Tyree, and Logan Diggs. And while all three are talented in their own right, the more the season has progressed, the more it has become clear that Estime is the best of the bunch. The effectiveness of their rushing attack dropped considerably when he was banged up on the sidelines for a stretch a week ago, and his bruising style provides the extra benefit of wearing down opposing defenses as the game goes on. Tyree may have the most receptions so far out of the backfield, but the team will find their best success if they start treating Estime like the clear focal point he deserves to be.

Stanford’s recent run of inferiority goes deeper than just the 1-11 record in their last twelve games. Seven of their last eight losses have been by double-digits, with an average margin of defeat of 22 points per game. They have not just been bad, they have been terrible, and that includes against the spread, as the Cardinal have covered just once in their last twelve games. In a matchup of two teams going in opposite directions, I expect the Irish to continue to find success under Drew Pyne and keep their winning ways going with an easy cover on Saturday against Stanford.

Mike’s Pick to Cover the Point Spread: Notre Dame -17. Bet your Week 7 NCAA football predictions for FREE by scoring a 100% real cash bonus up to $300 when you use bonus promo code PREDICT100 at MyBookie Sportsbook!