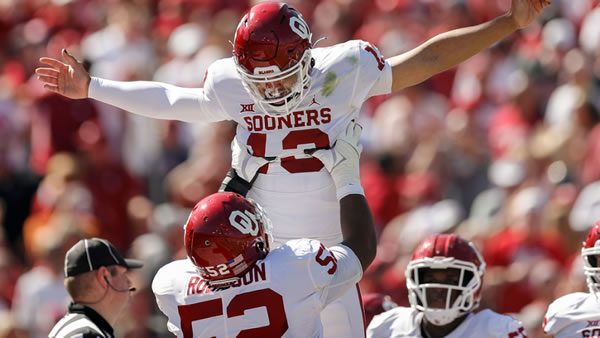 (Shopping lines is smart! You do it at the store, why not at the books? Check out our best sportsbooks list!)

Once again, Oklahoma found a way to get the job done. The Sooners rescued the game from out of nowhere as Caleb Williams turned things around for Oklahoma and led the Sooners back to a win over Texas that even included the cover in the process. But they still haven’t really impressed anyone to this point, and they’re sitting pretty only because everyone else outside of Athens, Georgia has shown something resembling a flaw this season.

TCU has been plenty flawed, as the Frogs haven’t been able to get stops. But the offense stepped up in a big way last week in Lubbock, as TCU unloaded on Texas Tech for a 52-31 result that showed there just might be more to this TCU team than has met the eye to this point. With Oklahoma’s offense seemingly back on track, all signs so far are pointing to a lot of points being scored in Norman.

How the Public is Betting the TCU/Oklahoma Game

The money has come in on Oklahoma so far, pushing the line from -12.5 to -13.5 for the Sooners. The public seems to think that’s just about right, as the tickets are now at 51 percent on the Frogs. The total has ticked down slightly, falling from 65.5 to 65.

When TCU Has the Ball

This is like throwing darts right now, as TCU might be playing games with injuries or might be genuinely down two of its best players. With Duggan and Evans, both listed as questionable and Gary Patterson offering nothing in his press conference, both possibilities must be considered.
With both on the field, TCU’s ground game has the chance to do something similar to what Bijan Robinson did to Oklahoma’s defense last week, as Evans is one of the best young backs in the country, and Duggan offers a dual-threat at running back. Without them, TCU will opt to throw much more often, as backup Matthew Downing is not a runner and will try to win the game from the pocket. Given what Casey Thompson did last week, that can work, but it’s going to be a dicey proposition because the Frogs aren’t likely to be as explosive as Xavier Worthy was last week against the Sooners. This is going to be a game-time situation as to how to approach this game.

Lincoln Riley is also being coy about his starting quarterback, but anyone who saw the second half of the Texas game knows it has to be Caleb Williams. Williams led the Sooners back from a deficit that looked impossible, and if he’s not the starter moving forward, something’s not quite right in Norman. The odds are that Williams will start the rest of the season, and Spencer Rattler will be playing somewhere closer to the West Coast next year.
The odds are also good that Kennedy Brooks will play a huge role in this game, given how the Frogs have been getting gashed on the ground. Part of that is because the Frogs’ schedule to this point has included Texas and SMU, but Texas Tech isn’t known for running the ball, and SaRodorick Thompson still carried for 118 yards against TCU’s defense. As long as Williams plays the way that he did against Texas, there really doesn’t seem to be a heck of a lot that TCU can do to slow down Oklahoma’s attack.

More Picks: Alabama vs Mississippi State Against the Spread Play >>>

This matchup hasn’t gone particularly well for the Horned Frogs since they moved to the Big 12. They seem to have Texas and Texas Tech pretty well figured out, but Oklahoma remains head and shoulders above the rest. The Sooners have covered in five of the past six meetings in this series, with the one exception being TCU’s most recent trip to Norman, which had the Frogs getting 18 points in a game the Sooners won by four.

However, TCU has tended to play pretty well on the road, covering in five of their past six trips from Fort Worth. Oklahoma meanwhile has covered seven of its last ten games in the conference, although two of the non-covers have come in three league games this season. Oklahoma doesn’t have a cover this season at home against an FBS team, as its only covers have been Western Carolina and Texas.

What has been consistent in Norman is cashing the under, as the under has hit in seven straight meetings in this series.

It could be fairly chilly when these teams kick off, as temperatures are set to drop into the high to mid-40s during this contest. Wind won’t play a factor, as it will blow at just four miles per hour.

I don’t really know which way to go here and won’t until we actually find out who TCU plans to start at quarterback. If it’s Duggan, I think the line is a bit too high. If not, I think Oklahoma is likely to cruise to a cover in this one. I’d lean toward taking Oklahoma, but I wouldn’t make this bet until game day, as we’re going to need more information before locking something in. For now, give me the Sooners. Bet your Week 7 college football picks for FREE by taking advantage of a 100% real cash bonus offer on your deposit of $100 to $1000 at Betnow Sportsbook!