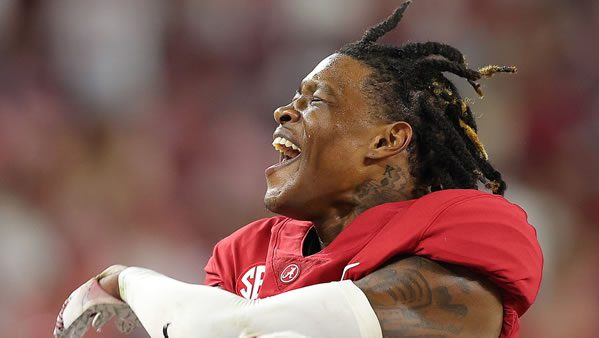 (Get the best teaser payout odds >>> Every single dollar matters!)

What’s something Mississippi State can claim that Alabama can’t? A win over Texas A&M in 2021. The Bulldogs went to College Station on Oct. 2 and upset the Aggies 26-22, knocking A&M out of the top 25 and taking the luster off what was supposed to be a matchup between the two best in the SEC West.

Or so we thought, as A&M responded with its best game of the season and stunned Alabama, throwing what had been a mostly stable College Football Playoff situation into chaos. One more loss for the Tide means they’re almost certainly done (unless it comes to Georgia in the SEC title game), and considering that Bama’s best win is over a middling Florida team that appears third-best in the SEC East, there are real questions now about whether Alabama is actually mortal this year.

So now the Tide gets the chance to prove otherwise against Mississippi State, which has had a weird season so far in Year 2 under Mike Leach. The Bulldogs have actually looked like a strong team at times, besting N.C. State and getting the win at A&M, but they’ve also lost to a pedestrian LSU and a reasonably weak Memphis, and they just barely escaped against Louisiana Tech. This game barely made Alabama break a sweat last season, as Leach’s air raid did nothing against Nick Saban’s defense in a 41-0 rout. With Alabama likely in a very angry mood, this is either a very bad time to be Mississippi State, or it’s going to serve as confirmation that this isn’t the Crimson Tide’s year.

How the Public is Betting the Alabama/Mississippi State Game

Everyone seems to think this is revenge time for Alabama, as 74 percent of tickets have come in on the Tide. The number hasn’t moved at all since the game went on the board, but the total has, dropping from 59 to 57.5.

The offense wasn’t the problem for Alabama against Texas A&M. The Aggies forced just one punt for the entire game, and the Tide gained 522 yards while scoring 38 points. Bryce Young had no problem lighting it up and providing answers to Texas A&M’s attack, and he might have to do the same thing again in this game.
Mississippi State has shown a tendency to play solid defense, especially on the ground, which could deter the Tide from trying to ride Brian Robinson’s ball-carrying to a win in this contest. Instead, Alabama will likely opt to keep the ball in the air, as nobody has yet been able to stop Young and Jameson Williams from doing whatever they’ve wanted to do. This season, Mississippi State has been very soft against the pass, and Young might have a field day here.

However, Will Rogers might be able to do almost anything he wants at the same time, as the Bulldogs’ quarterback has looked a lot sharper in his second year under Leach. Alabama stopped the run beautifully against A&M, but Mississippi State doesn’t bother to run the ball anyway, so that’s not going to play much of a factor here.

Instead, this game will come down to how well the Bulldogs can find Makai Polk and let him attack the Alabama secondary. If Rogers has time to throw and can find the holes that A&M did a week ago, Mississippi State will be able to hang right with Alabama. If not, the Bulldogs could be in for another long day against this defense.

Mississippi State has upset the apple cart a few times lately, as the Bulldogs have covered in five of their past seven games as an underdog. However, the Bulldogs aren’t the best at following success, as they’ve managed to cover in just three of their past 11 games following a win on the spread. They’ve also really struggled to get things going in October, as they’re just 1-7 ATS in their past eight October games.
That’s not great when facing Alabama, which has covered in nine of its past 11 when it’s coming off an ATS loss. The Tide have also covered in eight of their past 11 against the SEC, and the favorite has covered in five of the last six matchups in this series. Oddly enough, Starkville has not been friendly to these offenses, as the under has cashed in nine of the last ten matchups at Mississippi State. Things haven’t been much better in Tuscaloosa, as only four Unders in all have cashed in the past 21 meetings between these longtime SEC rivals. However, take that with a grain of salt, as Leach wasn’t around for 20 of those contests.

It’s going to be a cool night for this game, with temperatures dropping into the 50s before the evening is over. Wind won’t play much of a factor, with the wind blowing at just five miles per hour to the north.

Whether the Tide cover here depends on which Alabama defense shows up. If it’s the one that throttled Mississippi, the Tide will be in great shape. If it’s what showed up in College Station, Alabama is in trouble.
But the key here is that Mike Leach never does anything different, and Nick Saban learns from his mistakes. Saban showed he knew how to defend the air raid last time out, and the Tide shouldn’t put out two clunkers in a row. Give me Alabama to bounce back. Bet your Week 7 college football picks for FREE by taking advantage of a 100% REAL CASH bonus on your first deposit of $100 to $500 at GTBets Sportsbook!