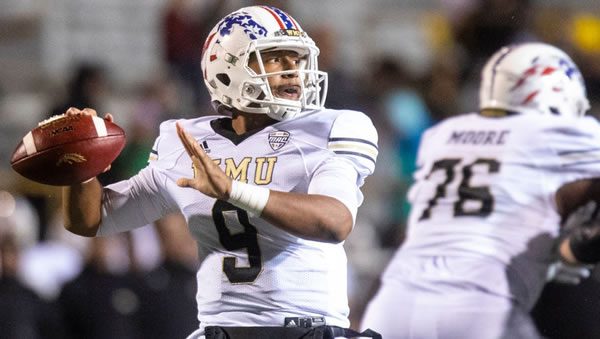 Both teams are bowl eligible and can’t win the MAC’s Western Division, but there’s still plenty on the line here, as the Michigan MAC Trophy is on the line. Western Michigan has held it for the past three seasons and needs to beat Eastern to have any chance to retain it. If the three schools all split with each other, the trophy returns to the previous holder, so Western would be able to keep the trophy with a win here and Eastern beating Central Michigan next week.

Eastern has gone the longest without touching the trophy, as the Eagles last claimed it in 2012. They’ve got to get two wins to do it, which could be a problem given that the Eagles have lost their past two games at the Factory to take themselves out of contention for the Western Division crown. But Eastern has been scoring plenty of points as of late, which could lead to yet another MACtion shootout.

The public is backing the Broncos in this situation, as 56 percent of the tickets have landed on the visitors. The total and the spread are unchanged.

For Western, the biggest question is how they’re going to hurt you, because it’s pretty difficult to stop the Broncos’ attack. Kaleb Eleby has become an excellent decision-maker with the ball, Sean Tyler has averaged more than six yards per carry and Western spreads out just about any defense it plays, making it very difficult for opponents to slow them down. Skyy Moore leads Western with 67 catches on the season, but he’s been held under 100 yards in each of the Broncos’ past two games.

That’s both a sign that Eleby is spreading the ball well and a sign that Western might need Moore to step up, because the Broncos lost one of those games to Central Michigan and had to battle a tough fight against a weak Akron squad in order to get the win last week. Against this Eastern defense, the Broncos will likely opt for the running game for as long as possible, because the Eagles have been very soft against the run. Ground-and-pound Ohio just beat up the Eagles for 265 rushing yards a week ago, and Eastern ended up on the wrong side of the result when all was said and done. If Western can keep the ball moving with Tyler, it has the edge.

Running the ball isn’t really what Eastern’s going to do here. First, the Eagles aren’t really that skilled on the ground. Second, the Western run defense has been pretty effective, which means the Eagles are likely to put the ball in Ben Bryant’s hands and let him throw as often as possible. Bryant did torch Ohio for 354 yards through the air, but the bad news was that he needed 41 completions and 57 attempts to do it, and it only resulted in one passing touchdown.

Tanner Knue, Hassan Beydoun and Dylan Drummond do give the Eagles several pass-catching threats, but with no real run threat from the backs and Bryant not a mobile quarterback, opposing defenses can drop seven or eight guys into coverage and dare the Eagles to try to beat them on the ground. Western is good enough at defending both the run and the pass to do exactly that, which could make it tough for the Eagles to get the job done well enough to keep the Broncos off the field.

These teams have played more than their fair amount of shootouts over the past few seasons, as they have managed to top 60 points in four of their past six meetings and would have done it in six of eight had the Eagles scored more than seven in the 2014 matchup. Eastern has now won back to back games in this series, and the Eagles have been the much stronger bet as of late.

Outside of blowing up the FlashFast offense when they faced Kent State in Kalamazoo, Western really hasn’t done the job in MAC play this season. The Broncos have just one cover in their six league games this season, the aforementioned game with the Flashes. Otherwise, Western has four ATS losses and a push in the MAC, far from ideal when facing an Eastern team that’s covered in three of its past five contests. However, Eastern has its own issues: the Eagles have failed to cover in back-to-back games at the Factory.

The good news is that it will not be snowy, but it’s also going to be chilly in Ypsilanti. Temperatures will dip into the low 40s on a cloudy evening in eastern Michigan.

The best bet on the board is once again the over. Western has had its problems with fast offenses at times, but the Broncos run the ball so well that it might not matter. Western shouldn’t have too many problems going through the Eastern run defense, and with how quickly the Broncos can score, there seems to be a good chance for the over to cash here.

As for the spread itself, I don’t think Eastern can win this scoring contest. The Eagles were beaten up by Ohio, and I think Western does the same thing. Give me the Broncos. Bet your Week 12 college football picks FREE by taking advantage of a 100% REAL CASH bonus on your first deposit of $100 to $300 at MyBookie Sportsbook! (Must use bonus code PREDICT100 to receive the special bonus!)