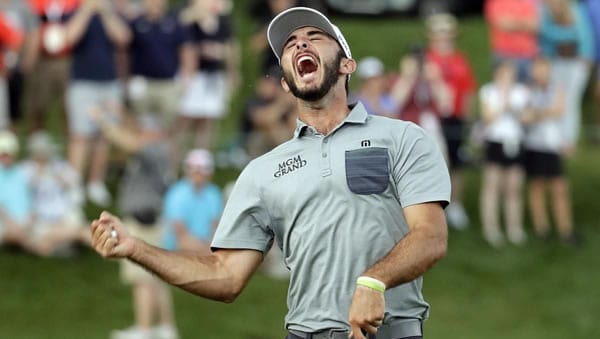 There are few snowflakes flying outside my window now, so writing about golf in Bermuda conjures up a little personal envy but let’s see if we can’t at least make a little cash off the Bermuda Championship. This event was contested for the first time in 2019 and was originally conceived as an alternate stop to the HSBC Champions, but CoVid has made the Bermuda Championship a full points event for the 2020-21 season. The winner is getting an invite to the Masters next season along with the FedExCup points bump, so there is plenty on the line for those making the trip to the island. Brendon Todd broke a long winless drought here last season, and he will be back to defend his title against a veteran field that includes Henrik Stenson, Luke Donald, and Jason Dufner. There is also a strong contingent of up-and-comers here like Will Zalatoris, Doc Redman, and Maverick McNealy.

Port Royal has hosted just one official Tour event, but the 6.850-yard, par-71 course has seen some high-level golf as a previous host of the Grand Slam event. There are ocean views on nearly every hole, and designer Robert Trent Jones expertly used the natural elevation changes to create some stunning backdrops. The course is relatively easy by Tour standards with wide fairways and receptive greens, but players will need to get the putter going to stay alive in a shootout. The winning total was 24-under last season, but several players were able to hit the 15-under mark, and twelve players carded four rounds in the sixties. That kind of scoring pace will keep this event wide open as rounds of 64 or better are possible at any time. Todd was able to record a 62 on Sunday to overtake the field, including Scottie Scheffler, who fired a 62 in the opening round.

Each week, we take a look at the online betting sites and highlight the best values on the board. We make a short, middle, and long odds pick to win and breakdown a couple of popular head-to-head matches that you can find at just about every golf betting outlet. Odds and pairings for this week can be found at Bovada. Here are our picks to win the 2020 Bermuda Championship.

Varner has a knack for playing his best when the leaves start to turn with at least one top-10 finish during the fall portion of the schedule in each of the last three seasons. As one of the best ball strikers in this field, Varner should be able to see volume birdie looks at Port Royal. He is 17th in off-the-tee performance, improves to 8th in tee-to-green metrics, and ranks 18th in total strokes gained. Varner is 35th in birdies and 33rd in scoring average despite a putter that often has him losing strokes to the field in a given round. Lackluster putting puts Varner in the same category as players like Keegan Bradley or Sergio Garcia, but, like those players, he can win when the putter is humming. The greens at Port Royal offer chances to make mid and long-range putts, and Varner is going to see plenty of opportunities. If he is inside the top half of this field in putting, he should be a contender.

Note: If you’re betting any kind of serious money on golf futures or head to head matchups, you need to be doing so at a sportsbook that offers reduced odds where favorites cost less and underdogs pay more. Betting at reduced juice adds up HUGE over the long haul. You can also bet on football/basketball at -105 odds! Find these great offers and more at BetAnySports!

Cam has often been one of the streakiest players on Tour with a boom-or-bust quality to his play, but his consistency has been on the rise, and he missed just three cuts last season. He ran hot at the 3M, finishing 3rd there to prove he can hang in a very fast scoring environment like we are going to see this week. He has some pop off-the-tee, ranking 49th in driving distance and adds the 28th best GIR rate. Cam is solid on the greens, ranking inside the top-50 in birdie and scoring, and that putter work helps float his scrambling stat all the way to 14th. No one gets through an entire week without a couple of misfires, so the ability to get up-and-down is just as important as how many birdies you make. Hitting the fairway is Tringale’s weak spot, but Port Royal isn’t especially, and the conditions off the short grass aren’t too demanding either. Cam should be able to use his length to attack the course and keep pace in the shootout.

Homa is another player that often sees his best results when scores are low, and he proved that with a T3 at the 3M in August. That was one of his four top-10’s in 2020, and he nearly made it to the Tour Championship but came up just a bit short at the BMW. Max is a solid driver, ranking 44th in off-the-tee performance. He is just 121st in fairways but has the ability to dial it in at times and hit 23 consecutive fairways at one point last season. He ranks 40th in total putting and should see an advantage over the field on the greens, and this field has a similar make-up to the one he beat at the Wells Fargo in 2019.

Picks to win based on the predicted score for all four rounds. Check with MyBookie (100% bonus up to $300!) for single round pairings and a variety of prop bets.

Two vets square off here, and Hoffman is looking to go 3-0 for the fall, having already won this head-to-head at the Corales and Sanderson Farms events. It looks like Stenson is trying to get some rust knocked off after a long layoff, and it shows a bit in his play as he currently ranks outside the top-100 in greens hit and outside the top-200 in strokes gained-putting. Hoffman rarely takes much time off and is probably just more ready to play at this time of year. He owns some definite advantages in birdie average, driving distance, and overall off-the-tee performance. Stenson is the more accurate player in terms of finding fairways and remains one of the better scramblers on Tour, but that won’t pay off enough at a Port Royal course that helps the player more often than it hurts them.

Both players have played quite a bit this fall and have largely shown they are swinging it well, but McCarthy has a 2-1-1 edge when they have shared the field and won this head-to-head last at last year’s Bermuda by seven strokes. Ventura is longer, but McCarthy is the more accurate, leading in fairways hit. The putting stats are nearly identical, but Denny has a slight edge on the greens overall that shows up with a scrambling stat that is top-35 on Tour with Ventura back at 99th. I would actually give Ventura the better chance of notching a top-5 finish this week as he does have the more dynamic game, but I also think he is more likely to miss the cut if he gets a bit off track. I think this ends similarly to last season at Port Royal when McCarthy was T15, and Ventura was back at 41st. It will probably be a bit closer this time around, but the slow and steady McCarthy will win another race.

Bet this month’s golf picks for FREE by taking advantage of a special 100% bonus on your first deposit of $100 to $1000 at BetNow Sportsbook!