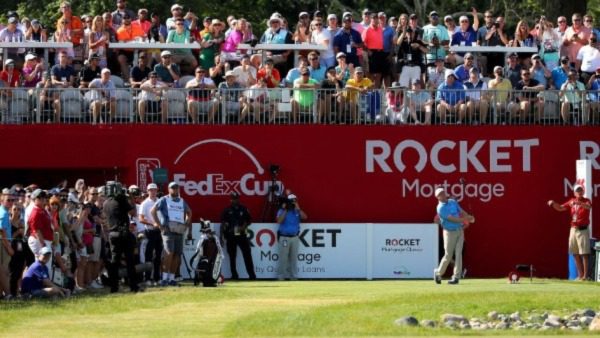 Two events remain before the FedEx Cup playoff tees off in a couple of weeks, the first of which occurs this weekend with the fourth playing of the Rocket Mortgage Classic at the Detroit Golf Club.

A field of 156, which includes six of the top 30 players in the World rankings, will compete this weekend for $8.4 million in prize money and crucial FedEx Cup points. And with only the Wyndham Championship left after this tournament, those Cup points might come in really handy for a whole bunch of guys on both sides of that 125-player cut.

Three years ago, Nate Lashley, the final player to make the field, really ripped things up at the DGC, shooting a pair of 63s on his way to a winning score of 25-under.

Last year’s Rocket Mortgage Classic featured some serious drama. Australian Cam Davis holed out from the sand for eagle on the 71st hole, then birdied the 72nd to reach a three-man playoff, then outlasted Troy Merritt and Joaquin Niemann in five extra holes to win the tournament. Hank Lebioda and Alex Noren tied for fourth.

Last week on the PGA Tour, Tony Finau came from five shots down with 11 holes to play on Sunday to win the 3M Open in Minnesota at 17-under par. Sungjae Im and Emiliano Grillo tied for second at 14-under, while Scott Piercy, James Hahn, and Tom Hoge tied for fourth at -13.

Davis, Merritt, Lebioda, Finau, Piercy, and Hahn are all part of this week’s field in Detroit.

Over the three Rocket Mortgage Classics played at the DGC, three players own two top-10 finishes; Niemann, as mentioned above, finished T-2 here last year and T-5 in 2019; Kevin Kisner placed third in 2020 and T-8 last year, and Merritt finished T-8 in ’20 and lost in that playoff last year.

Each week we take a look at the online sportsbooks and highlight what we believe to be some of the best values on the board, along with picks to click on the weekend. Odds to win and pairings for this week can be found at Bovada (You can bet the tournament live-in-progress there!) Here’s our take on some of the field for this week’s Rocket Mortgage Classic.

Kisner, No. 27 in the World rankings, runs a bit hot-n-cold but might be trending in a good direction. He owns four top-8 finishes this season, two in Hawaii back in January and a fourth-place finish at The Players in March, but later missed five of six cuts. But he took a T-6 at the Travelers Championship in June, then rallied to finish T-21 at The Open at St. Andrews a couple of weeks ago, after shooting an opening-round 74. He also, as mentioned above, owns two top-8s in three tries at this tournament.

This Major champion has also missed a few cuts this season, but he owns five top-10 finishes, including a T-10 at the US Open. Also, this is his third time around at this tournament, so he should have plenty of familiarity with the DGC. Woodland is only No. 88 on the World rankings but the way he can still bomb the ball off the tee, we won’t be surprised when he pops up on the leaderboard sometime this weekend. 50/1 is too good to pass up on this guy.

Bet your Rocket Mortgage Classic predictions for FREE by taking advantage of a 100% real cash bonus on your first deposit of $50 to $300 when you use bonus code PREDICT100 at MyBookie Sportsbook!