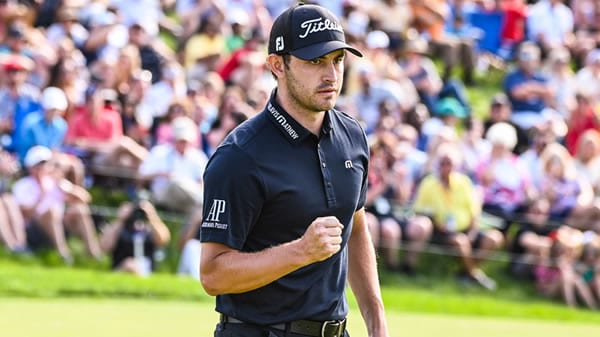 The temps are getting cooler everywhere but the PGA knows how to stay in the sun and the players are heading to Vegas this week for the Shriners Hospitals for Children Open. In a typical season, this is the time of year when players are traveling to Asia, Europe or simply taking some time off but CoVid is keeping people in the states and that has led to a very strong field heading to TPC Summerlin. Bryson DeChambeau is the 2018 Shriners champ and will tee it up for the first time since winning the US Open. Collin Morikawa, Rickie Fowler and Webb Simpson are among the favorites in the field with Kevin Na looking to defend his 2019 title and become just the second three-time winner of this event. Sergio Garcia joins the field after winning last week and Francesco Molinari will make his first appearance since play was halted this Spring.

There has been plenty of memorable golf in the Las Vegas area, including Tiger Woods first win on Tour coming at this event when it was the Las Vegas Invitational and TPC Summerlin has been a fixture in the PGA course rotation. The 7,250 yard, par-71 course winds through some prototypical desert scenes with waste areas and dry washes a prominent feature alongside dogleg fairways. Club selection is important throughout the course as most holes have some uphill or downhill element built in and greens were designed with championship play in mind so there are four distinct zones on each green to allow a variety of pin placements. The inward nine is very risk-reward oriented with a driveable par-4 at the 15th hole as part of a four-hole finish that is among the best on Tour in terms of scoring chances. Scores should be low if recent trends continue as the winning total has hit 20-under on thirteen occasions since 2004.

Each week, we take a look at our favorite sportsbooks and highlight the best values on the board. We make a short, middle and long odds pick to win and breakdown a couple of popular head-to-head matches that can be found at just about every golf betting outlet. Picks to win and head-to-head pairings for this week can be found at Bovada Sportsbook. Here are our picks to win the 2020 Shriners Hospitals for Children Open.

I’m not sure it gets much better than Cantlay’s 1-2-2 run at Summerlin since 2017. In those three Shriners starts, Patrick has shot 65 or better four times, has a 65.6 overall scoring average and is an aggregate 52-under par. He played sparingly over the summer with just twelve starts in 2020 but missed just one cut and had several strong showings despite the limited chances. Cantlay is one of the better ball strikers on Tour and ranked 23rd in off-the-tee performance last season with the 12th best tee-to-green metrics. He was a top-15 putter on greens in regulation and that led to top-20 marks in both birdie and scoring average. He clearly has solved the puzzle at Summerlin and another run at a win is a good bet.

Wolff is off to one of the fastest starts to any PGA career and he may already have been crowned a Major champion if it weren’t for Bryson DeChambeau. Wolff was solo second at Winged Foot, shooting rounds of 65 and 66 at the Open and was the only player other than DeChambeau to finish at even par or better. Wolff hit 15-under at Summerlin last fall which was good enough for 18th and he carded a 69 or better in all four rounds. He should be able to improve on that considering his 4th ranked driving distance is a good match for a course that isn’t especially tight off the tee. Wolff enters the week 12th in off-the-tee performance and was good enough on the greens to net the 34th most total birdies in 2019-20. That ability to attack the course and score in bunches will provide an edge in a fast scoring environment. He proved he can take on a tough US Open venue but this kind of course is more tailored to his style of play and his aggressiveness could pay off with a win.

After some shaky play ahead of the play stoppage, Hoffman came out after the break and logged some nice results with a T7 at the Workday and a T13 at the Northern Trust. He has continued that solid recent trend with T14 and T6 finishes in his last two starts and now returns to Summerlin where he has a wealth of experience and three career top-10 finishes. Since the start of the new season, Hoffman is top-30 in performance off-the-tee and 20th in birdie average. That birdie rate is powered by the 16th best putting average and Charley remains one of the best around the greens, ranking 45th in scrambling. That ability to save strokes can be key in fast scoring environments and this field is not so strong that a guy like Hoffman can’t use that veteran moxie to rise to the top.

Picks to win based on predicted score after all four rounds. Check with BetAnySports Sportsbook for single round pairings and variety of prop bets.

Ancer is coming off his best stretch as a pro, making 18 of his last 21 cuts with two runner-up finishes in there while Johnson has missed six cuts over that same stretch and has failed to record a single top-10. Abraham has missed the cut in three of four starts at TPC Summerlin but did finish fourth in 2019, shooting 17-under total while Zach has just three rounds below 70 in his two Shriners starts. Both are control players off the tee but Ancer was the better in greens hit last season and was the better putter, leading to significant advantages in birdies per round and scoring. Ancer finished 2020 as the 10th best scrambler on Tour and has the edge over Zach there as well despite Johnson having the experience advantage. I don’t expect either to push toward the top of this field but Ancer has proven to be the better scorer over the last year or so and that gives him the best chance to win in a fast scoring environment.

It is tough to pick against a ball striker like Matsuyama, especially after he notched six top-25 finishes to end last season, but Finau was in the top-8 on four occasions over that same stretch and bested Matsuayma at Winged Foot. Finau has never missed a cut at Summerlin and carded a 62 during last year’s Shriners to give him the look of a player that has no ceiling at this course. Both players are very similar in a lot of key stat categories but I’m sticking with Finau as he was routinely the better putter in 2019-20 and has found a way past many of the mistakes that plagued his early career. With that, Finau has been a top-10 machine over the last season-plus and I have him inside that top-10 line again with Matsuyama in the 15-to-20 range.