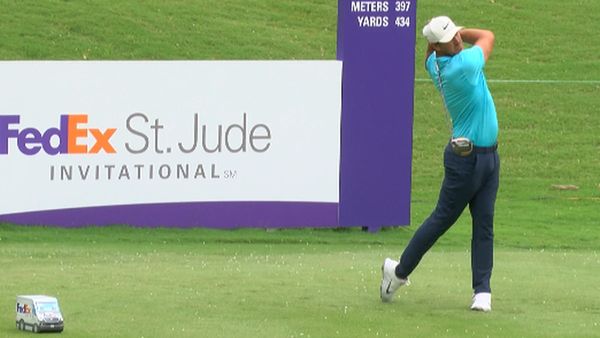 The chase for the really big golf money begins this weekend with the first event of this season’s FedEx Cup playoff, the FedEx St. Jude Championship at TPC Southwind in Memphis.

A field of 122 will play this weekend to survive and advance into the next two rounds of the playoff, commencing with the Tour Championship in Atlanta in two weeks.

TPC Southwind plays to a par-70 at just over 7,200 yards, but while it’s not overly long, you gotta keep it in the short stuff. This course opened in 1988 and undertook renovations in 2004 and 2020. TPC Southwind has hosted the Memphis swing of the PGA Tour every year since 1989.

Over the last three events at TPC Southwind, the average winning score is 15-under par. So our guess is this course is about two shots tougher per round than a couple of courses the PGA Tour recently visited, TPC Twins Cities, and the Detroit Golf Club.

Last year Abraham Ancer shot 67-62-67-68, then birdied the second hole of a playoff to win the St. Jude Invitational over Sam Burns and Hideki Matsuyama. Harris English, who led after each of the first three rounds, finished fourth; Daniel Berger, Paul Casey, and Cam Smith tied for fifth; Bryson DeChambeau and Will Zalatoris finished T-8; and Dustin Johnson and Ian Poulter T-10.

Kim won last week after taking a quadruple-bogey eight on his first hole of the tournament!

Each week we take a look at the golf betting sites and highlight what we believe to be some of the best values on the board, plus a few picks to click on the weekend. Odds to win and pairings for this week can be found at Bovada. Here’s our take on some of the field in this week’s St. Jude Championship.

Rahm is the seventh choice on Bovada’s St. Jude Championship betting board, behind Rory McIlroy at 11/1, Cam Smith and Scottie Scheffler at 14/1, Justin Thomas at 16/1, and Patrick Cantlay and Xander Schauffele at 18/1. We’re not big on betting the top tier of players on most tournament boards but when a guy like Rahm, ranked No. 6 in the World, is the seventh choice at 20/1 he’s got our attention. Rahm owns five top-10 finishes in only 15 events this season, including a win at the Mexico Open. He’s also made the cut his last 14 tournaments, including at all four of this year’s Majors. He’s been a bit quiet lately. However, he’s still easily one of the best players in the world and might be due for a big week.

World No. 9 Hovland owns eight top-10 finishes over his last 18 tournaments, six on the PGA Tour, including back-to-back wins at Mayakoba and the Hero World Challenge, and two on the DP Tour, including another victory at the Dubai Desert Classic. Most recently, he took a T-4 at the Open Championship at St. Andrews, falling from contention with a 74 on Sunday. He’s taken some time off since then, and there’s nothing wrong with that, heading into this FedEx Playoff.

Stallings struggled through most of this season, missing 13 of 24 cuts through the US Open in June. But he’s apparently found something since then, with a T-8 at the Travelers Championship, a T-4 at the John Deere Classic, a T-10 at the Rocket Mortgage Classic in Detroit, and a T-13 last week at the Wyndham. That run includes 11 of 16 rounds in the 60’s, including a 65 last Sunday. If he can avoid the one bad round thing, which cost him at the Travelers and last week, we can see Stallings making a run at the leaderboard this weekend.

Bovada also offers a slew of collective bets on this St. Jude Championship. On the “two chances” board, Schauffele and Will Zalatoris are paired at 10/1 to win. On the “all top ten” board Fitzpatrick, 2020 winner Justin Thomas and Patrick Cantlay are teamed at 18/1. And on the “tri-cast” bet - which entails picking the top three, in any order - Thomas, Rahm, and recent double winner Tony Finau are teamed at 1000/1.

Play begins this week at 8:15 am local time Thursday, with players going off both sides.

After this weekend, the top 70 in the FedEx Cup standings advance to the BMW Championship in Delaware next weekend. Bet your Golf picks for free and beef up your football bankroll as well, by taking advantage of a 100% REAL CASH bonus on your first deposit of $100 to $500 when you use bonus code PREDICTEM at Betnow Sportsbook! The ultimate bankroll booster!