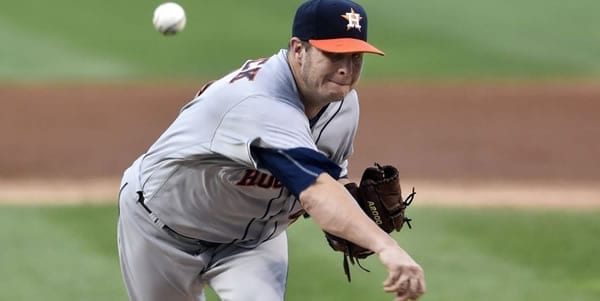 The Red Sox and Astros continue with their rematch of last year’s ALCS with the middle game of a three-game series Saturday night in H-Town. How are we betting this game with our free MLB pick?

Saturday’s MLB betting odds opened Houston and Peacock at around -135 over Boston and Price, with an over/under of 8.5 runs. Early betting action on the dog then dipped that line down to about -120.

Houston grabbed Game 1 of this series Friday night 4-3, cashing in as a +130 home dog on the MLB betting line. The Astros jumped out to an early 4-0 lead and hung on from there for the victory.

With Friday’s loss, Boston is 4-2 over its last six games. At 27-24 overall the Red Sox sit in third place in the AL East, six games behind the division-leading Yankees.

With Friday’s win, Houston is 3-3 over its last six games. But at 34-18 overall the Astros lead the AL West by seven games over second-place Texas.

This series is the second meeting between these teams this season. Last weekend Houston took two of three games from the Sox at Fenway Park.

Peacock is 3/8 on quality starts this season, and while he’s only one for his last three, he’s really been great as of late. Monday he held the White Sox scoreless on two hits through five innings, with nine strikeouts against zero walks. And over his last three starts, he’s allowed just one run and eight hits through 17 innings, with 24 strikeouts against five walks.

On the season the Astros are 6-2 with Peacock, 3-0 over his last three outings.

This will be Peacock’s first start against the Red Sox since 2017 when in two outings, including one in the American League playoffs, he gave up five runs and 10 hits through 7 2/3 innings. Houston split those two games.

Lefty Price, by our strict standards, is only 2/7 on quality starts this year, but he’s been better since a couple of iffy outings early on. Monday he held Toronto to two unearned runs and three hits through five innings, and over his last five starts he’s allowed just seven ER and 22 hits through 29 innings, with a 33/7 strikeouts/walks ratio.

Boston is only 3-4 with Price this season, but 3-2 over his last five starts.

Over four starts against the Astros last year, including two in that ALCS, Price allowed nine ER and 15 hits through 23 innings, with 30 whiffs. The Red Sox went 3-1 in those games.

Boston is batting .263/.351/.438 this season against right-handed pitching. This lineup also welcomed back slugger JD Martinez back Friday, after he had missed recent action with an illness.

Houston is batting .280/.365/.519 against left-handed pitching this season, which ranks in the top five among all lineups against lefties. But the Astros are still operating without spark-plug Jose Altuve. Houston has scored a total of 19 runs over its last six games.

Boston and Price get the check-mark in Saturday’s pitching match-up, but Houston owns edges in the splits with the sticks and in the bullpen comparison. We’re siding with the Astros for our free MLB pick for Saturday.