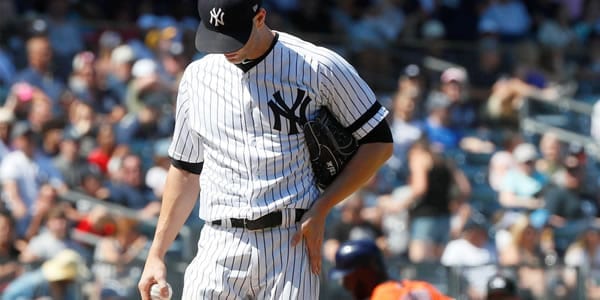 The Yankees shoot to continue their recent dominance of the rival Red Sox when the teams close out a three-game series at Yankees Stadium Sunday night. New York has taken the first two games of this series and swept three games from the Sox earlier this month. How are we playing this game with our free MLB pick?

Sunday’s MLB betting projected odds have New York and Happ at around -200 over Boston and Mazza, with an over/under of 10 runs. The Yanks could also be found at around -115, giving the run and a half on the MLB run line.

New York trailed 3-2 early Saturday then scored two runs in the fourth, four in the sixth and three in the seventh to pull away.

With Saturday’s victory, the Yankees now own a four-game winning streak.

At 14-6 overall, New York leads the AL East by two games over second-place Baltimore, and it’s just a half-game behind Oakland in the battle for the best record in the American League.

At 6-15 overall, Boston brings up the rear in the AL East, 8.5 games behind the division-leading Yankees.

The Yanks lead the season series with the Sox five games to none, and they’re 13-1 over the last 14 meetings with Boston.

On the injury front, the Yankees were already playing without Aaron Judge and Giancarlo Stanton, and now they could be without DJ LeMahieu after he sprained a thumb Saturday.

HUGE BONUS OFFER! DEPOSIT $500 AND GET $500 FREE AT GTBETS! BET FOR FREE ALL WEEK LONG WITH THIS MASSIVE BANKROLL BOOSTER!

So for the season, Happ’s given up eight runs and three homers through seven innings, and New York is 0-2 with him.

Over four starts last year against Boston Happ allowed eight runs and 18 hits, including five homers, through 23 1/3 innings. The Yankees won all four of those games.

Mazza will be making his second appearance of this season Sunday and his first career start. Two weeks ago, against these Yankees, Mazza tossed 2 2/3 innings of scoreless relief, allowing one hit, walking two while striking out three.

Boston is batting .275 this season against left-handed pitching, with a .331 team OBP and a .447 team slugging percentage.

New York is batting .266/.358/.486 against right-handed pitching this season. The Yankees have also scored 36 runs over their last four games.

New York is an obvious heavy favorite for this game, and with good reason. The Yanks also own the Sox as of late. However, betting baseball is all about betting value, and at that price, New York is of questionable value. Happ has not been good this year, and the Yanks could be without three of their best bats. Meanwhile, Boston hasn’t shown much so far this year, but you gotta believe they want to avoid a sweep. We’re taking the Red Sox at the big underdog price here.